Camera technology sorts by color and shape, lasers by structure

"Food safety is increasingly becoming an important concern. Fifteen years ago, optical sorting machines to compete with freezers and blanchers were considered a good investment. Those machines represented effective production. Today, every French fries processor in Europe has an optical sorter," says Steve Raskin, partner, and CSO of Optimum Sorting in Belgium. 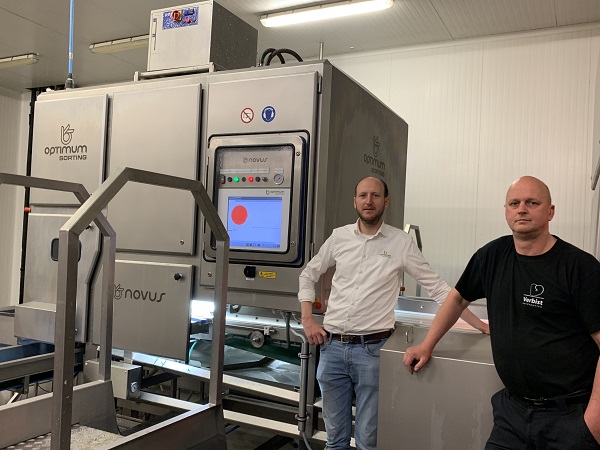 Optical sorting detects as much foreign matter and defects as possible without unnecessarily removing good-quality products. Verbist Aardappelen is a Belgian family business that peels and processes potatoes into frying products. It recently replaced one of its two Focus sorters from Concept Engineers with a new Novus 1200 from Optimum Sorting.

One sorting technology company becomes another
Business partners Paul Bergmans and Steve Raskin founded Optimum Sorting in 2017. Both had previously worked at Best Sorting, a company that focused on sorting technology, for many years. Paul and three other engineers had started it in 1996. Paul and Steve's paths parted some years later, but they picked up where they left off in Optimum Sorting.

Paul specializes in laser technology, which Concept Engineers was active with on the market. Talks between the two parties culminated in Optimum Sorting taking over Concept Engineers. By joining forces, these companies could accelerate the further development of optical sorting technology.

Lasers and cameras
"These technologies are complementary," says Steve. "Camera technology sorts on color and shape, lasers use structure. For example, hazelnuts: both the nut and shell are brown but have different structures, which a laser easily detects. Laser technology is most commonly used to rid fruit and vegetables, like freshly harvested potatoes, of foreign matter. Some of that can be the same color as the potatoes, so laser technology is used to sort by structure." 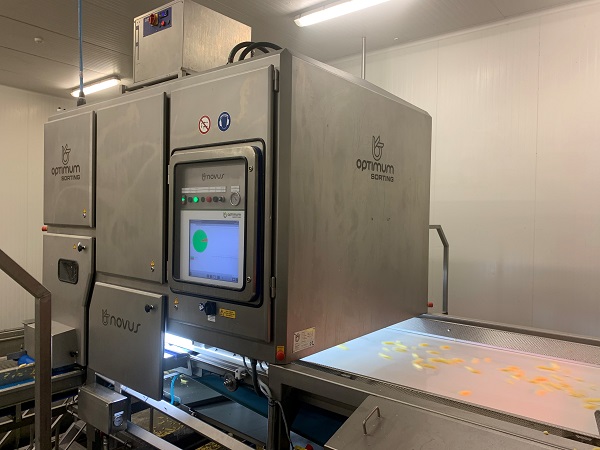 The laser light reflects differently on the surface of objects with different structures. "A potato is soft and contains a lot of water. If you shine a concentrated beam on that, the potato almost lights up. The tiny laser dot expands. If the laser falls on metal, the tiny spot remains small. These days, the camera/laser technology combination is used a lot in the French fries industry. Wanting optimal food safety drives that," continues Steve.

Dual sorting motions
French fries processors use a sorting machine to remove the foreign material brought in by the potatoes. Laster technology is useful here. After the potatoes are washed, peeled, and sliced, a second sorter uses camera technology to divert improperly peeled or discolored fries. These are corrected and sent through the machine for a second time.

Trend toward fresh fries
Verbist Aardappelen supplies vacuum-packed fresh fries. "Neither Dutch nor Belgian French fries restaurants want pre-fried fries anymore. Fresh is so much better, and consumers want quality. We process between 600 and 800kg of fries per hour. One person operates both machines. We'd need 20 people, were it not for the optical sorter. With today's labor costs, our industry simply can't do without technology. A machine costs money, but manual labor is even more expensive," says Carl Verbist.

He says he has no choice but to charge more for his fresh fries. "Electricity costs have tripled, foil has gone up by 50%, and fuel, for transportation to the customer, is substantially more expensive. And what if the summer gets as dry as is already being forecast? With a smaller harvest, potatoes and french fries products will become even pricier." 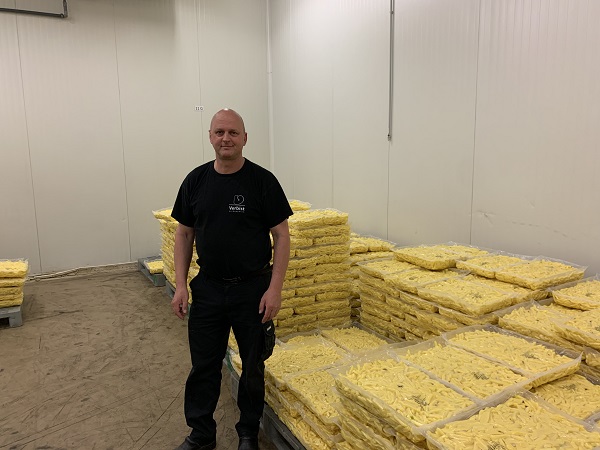 Don't mess with a winning team
The new Novus 1200 Verbist bought from Optimum Sorting is a successor of the older Concept Engineers machines Carl already uses. "I was delighted with Concept Engineers' equipment, so saw no reason to change technology. I could've upgraded the oldest machine with new cameras and equipment but chose to buy a completely new one."

"Then I could benefit from an investment deduction under the Belgian government's COVID-19 aid measures. I wouldn't have gotten this subsidy with an upgrade, which, of course, also costs money. Thanks to that grant, it made more financial sense to purchase a new optical belt sorter," Carl explains.

New development fits older models
"Verbist opted for a new machine, but you could give an existing Concept or Optimum sorter a second life. When we develop something new, we guarantee it'll fit the previous models. When designing new equipment, we never start from scratch but use the existing machines' configurations. That's our vision of flexibility," says Steve.

Sortindus
Alexander Dewilde of Sortindus, also in Belgium, sells sorting solutions to the fruit and vegetable and other food segments. He supervised the sale and delivery of the new Novus 1200 to Verbist Aardappelen. "Carl told me he'd been happy with his two sorters from Concept Engineers. So, he's somewhat familiar with the Novus 1200."

"But it's not lacking innovations. Its special 2x3-configured cameras mean the machine views each fry perpendicularly, all-round, and at full size. Nothing escapes the camera's lens. Huge progress has also been made, software-wise. The Cumulus platform, which all Optimum Sorting's sorting machines boast, is based on Artificial Intelligence," says Alexander.

Object-bound optical sorting
"We use images and AI to teach the software the difference between a good and bad fry," Steve adds. "You no longer have to color all the pixels anymore. We also used to consider the pixels exclusively. Yellow meant it was probably a good fry; black, that it possibly had a spot. But we didn't know where that spot was. Three pixels near to each other meant it was likely the same spot. If they were further apart, they were probably different fries." 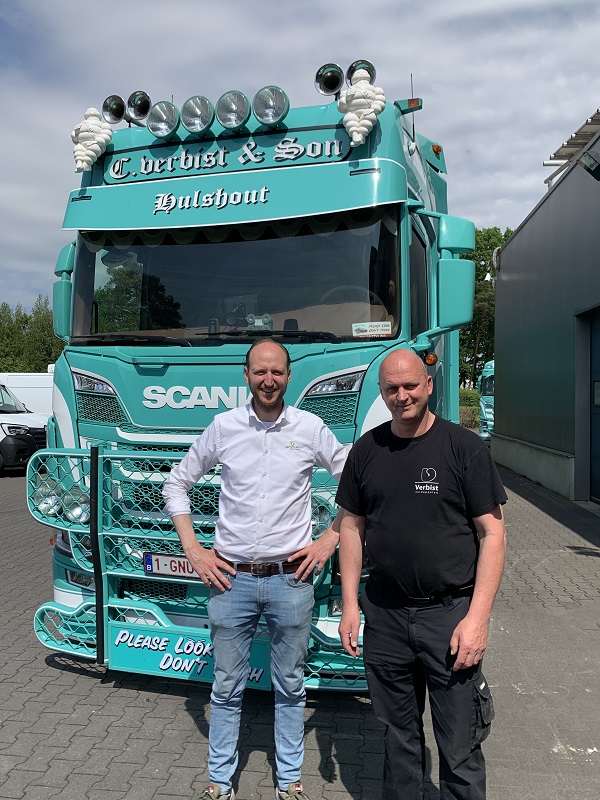 "Today's optical sorting is object-specific. The cameras show the entire object and can we count spots on the same object. We can even enter a minimum defect size, such as 0.5 mm. Then any spot below that size is allowed. But, should we want a fry with several small spots to be rejected, we can set the software to reject those. And if we want to allow three fries with small black dots per 100, we instruct the machine to do so. The possibilities abound," he says.

"I don't utilize everything the software offers," Carl admits. "For now, I use the new machine the same way as the previous sorter. I keep it simple. They did train us, but if you're not very technologically inclined, it takes some effort to get up to speed. My staff isn't that computer-savvy either. It'll still take some time to make optimal use of this advanced device."

Twee reject streams
"You can sort according to length, too," Steve continues. "You can have dual reject streams. The too-short fries are discharged via a valve bar, for example, to the flake line. A second reject flow looks at tips, eyes, and black and brown discoloration. The machine trims these rejected fries and feeds these processed fries back into the sorter to be rescanned. But, the too-short fries also obviously have to be rescanned for discoloration. We call these 'non-trimmable', and they're immediately discarded. That's what makes our software unique," he concludes.