Wholesaler turns 15: from bike deliveries in the Netherlands to truck deliveries from Spain

It was around 1980 when Thomas Bos first came into contact with the fruit and vegetable world. The local greengrocer was opposite his childhood home in the Dutch village of Zeddam. The many crates of fresh fruit and vegetables made an impression on Thomas as a small child.

He helped out at the store whenever he could. He loved displaying all the store's fruit and vegetables. Before long, Thomas was delivering these fresh and peeled products and peeled potatoes by bicycle. He brought them to the hotels and restaurants in the 'then still popular with tourists' border village'. 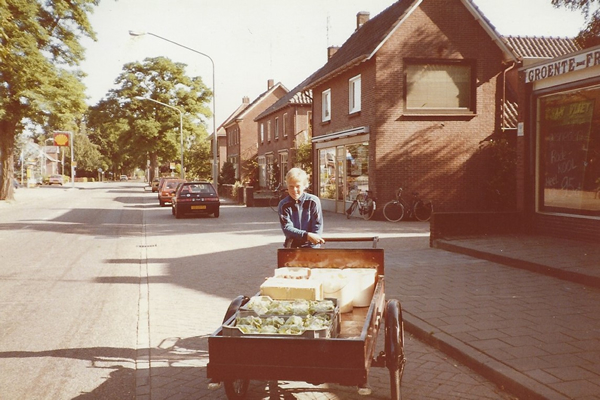 Thomas' friends usually headed to the park to play ball right after school. Not Thomas; he would head to the greengrocer, sandwich in hand. He became Thomas' mentor, teaching him all the tricks of the trade. Thomas accompanied his neighbor to nearby auctions and worked in the store. But he also harvested frozen kale and delivered it to the auction. Thomas' passion for fruit and vegetables had taken a firm hold of him.

In the years that followed, Thomas' interest in the sector kept growing. He completed his education. He was also one of the last groups that had to do compulsory military service. After this shortened service, it soon became clear that he would be working at a wholesaler in the nearby city of Zevenaar. There, Thomas did fruit and vegetable import/export. And that's where he grew to love Spain. He was soon driving to that country to buy oranges and mandarins and visit suppliers.

There was then a short stint in a different sector. Thomas, however, soon crossed the vegetable trading path again. In 2003, he emigrated to Spain. That was via an intermediate step at Fresh Park Venlo (Langfruit - part of the Van Rijn group). In Spain, Thomas founded Thomasol. And in a short time grew it into a successful business, with five office staff. That delivery bike had been exchanged for trucks. Those drive to and from Spain and various European countries.

Thomasol links buyers in Europe and some overseas countries. It has a direct connection to Spain. "These are retailers and wholesalers. We work closely with them. So, we can offer the market a Spanish fruit and vegetable package year-round," says Thomas.

"Thomasol is based in Spain and is familiar with the language and culture. It knows the growers/owners and their circumstances. We, therefore, immediately know what quality we can purchase where. Thomasol has built close 'family' ties with many suppliers and buyers. That's proved to be the key to success in Spain."

"Not just working from behind a computer screen or other fast means of communication. But being there, in person, talking to the locals. And knowing what's really going on. Not just in the office but also in the packing station or warehouse. Or at the table or out in the field, when necessary," Thomas concludes.

And Thomasol continues to expand this close contact. Thomasol Gestión SL is celebrating its 15th anniversary as is fitting. The company has already informed its loyal business partners with personalized, eco-friendly products.