Tomatoes are the most popular vegetables with Europeans

A convention entitled "Markets and Opportunities" was held during the first Sicilian edition of Enza Zaden's House Fair. 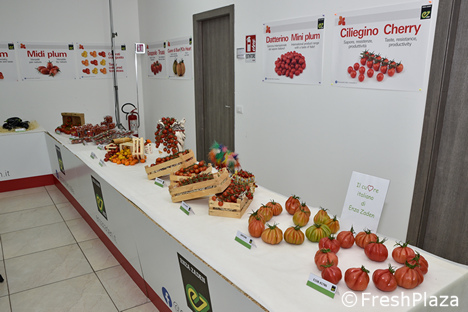 Above and below: tomato display set up by Enza Zaden 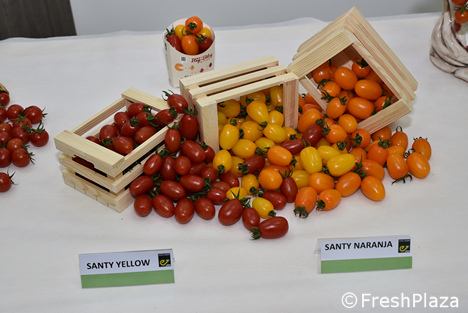 Hans-Christoph Behr from German market research agency Ami examined the situation on the European market and provided an overview on the main producer, exporter and importer countries of fresh tomatoes.

The main European fresh tomato producer is Spain, which is also a great exporter and consumer. Italian exports are instead encountering a few difficulties. According to the speaker, this is due to the extremely wide variety range, which includes varieties that are mostly unknown abroad. Basically Italy has too many specialities that are not well promoted from a commercial point of view. 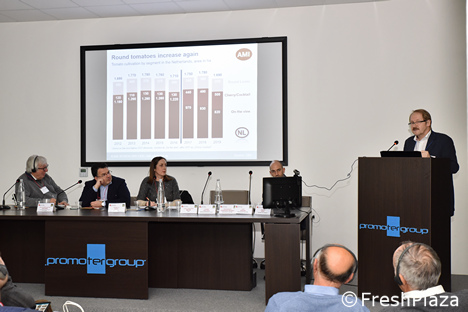 A moment during Behr's speech

Holland stands out among European exporters. Although it does not boast a huge production nor domestic consumption, its new high-quality varieties obtained thanks to controlled-environment greenhouses and artificial light are much more popular that the old tomatoes, which used to be considered large yet tasteless.

The cherry or cocktail tomato segment is growing everywhere except in Belgium where the production of round tomatoes has a long-standing tradition. Of course greenhouses are essential for these crops. 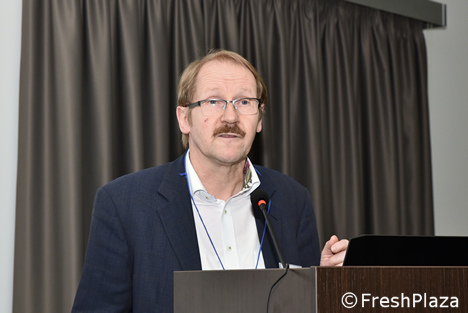 The expert from German agency Ami

Things in France and Germany are similar. In Belgium, production is stable but crops are increasing: this means the production model is changing as the focus is on smaller varieties that have lower yields  yet are more profitable. In Great Britain, things are slowing down partly due to the smaller varieties with lower yields and partly to the uncertainty deriving from Brexit, which means investments are being postponed.

In Italy, there is an excellent assortment of fresh tomato varieties, which though are known only on the domestic market. 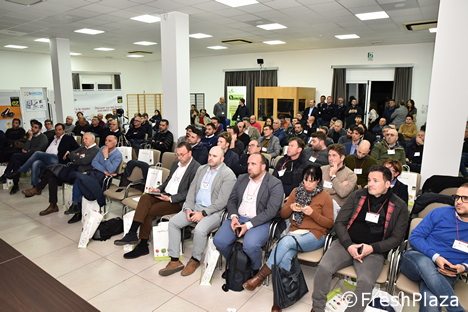 Foreign trade is mainly between EU countries, especially after the Russian ban.

When it comes to imports, Morocco plays an leading role with a 20% share on all imports. Turkey is less relevant and ships tomatoes mainly to Germany.

Germany is the leading importer and is supplied mostly from Spain and Holland. Morocco is growing at the expense of Spain. It must be noted that different tomato types are exported to different countries, proof that no two markets are the same within the EU. 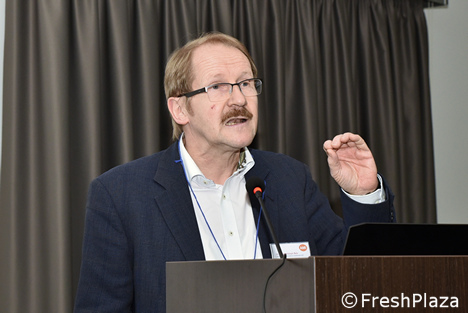 Italy exports mainly to Austria and Germany, but is losing positions when it comes to cherry tomatoes, while it constantly imports vine tomatoes from the Netherlands.

As for the prices of fresh tomatoes on the European market, they tend to be more stable than those of other vegetables. In addition, the same product can have a different price depending on the origin: it is not so much a question of quality, rather than supplier image (reputation). 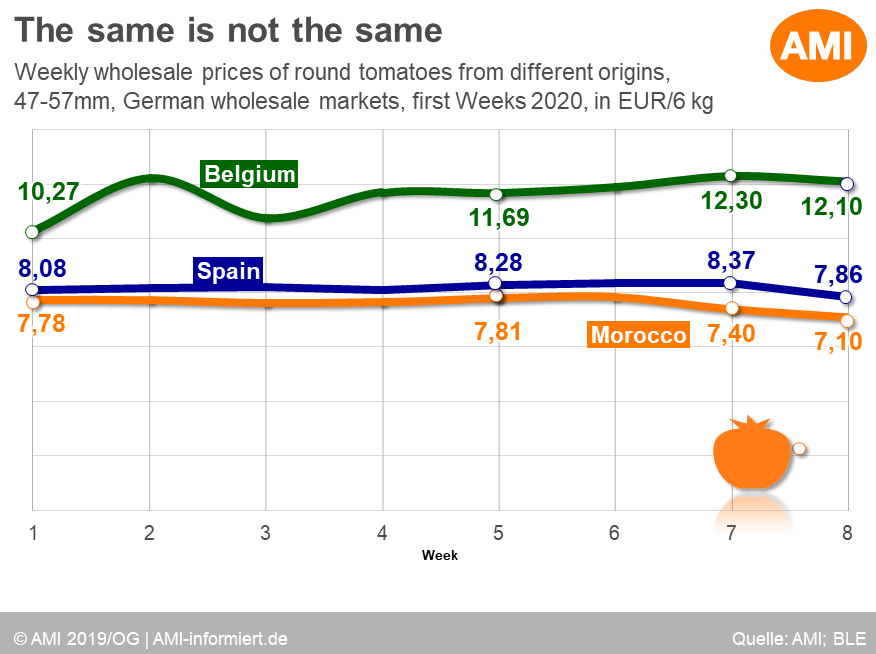 Same tomatoes, different prices (depending on the origin)

Different price ranges are possible for all segments, up to premium quotations nearing €10/kg. Just think for example to the high reputation of German tomatoes on the domestic market: German consumers are willing to spend a lot for short-chain products. 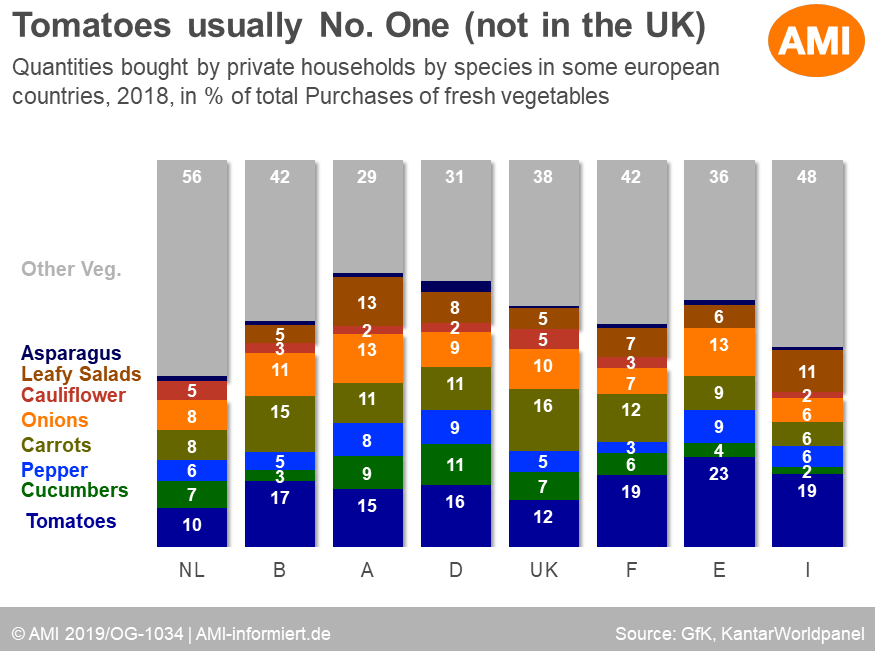 The most popular with the Europeans

Tomatoes are the most popular fresh horticultural products in almost all European countries (except for the UK, where carrots are the most popular). Spain, Italy and Poland are the main buyers and consumers, especially during the summer months but, if we look at the turnover, the differences are not so great. 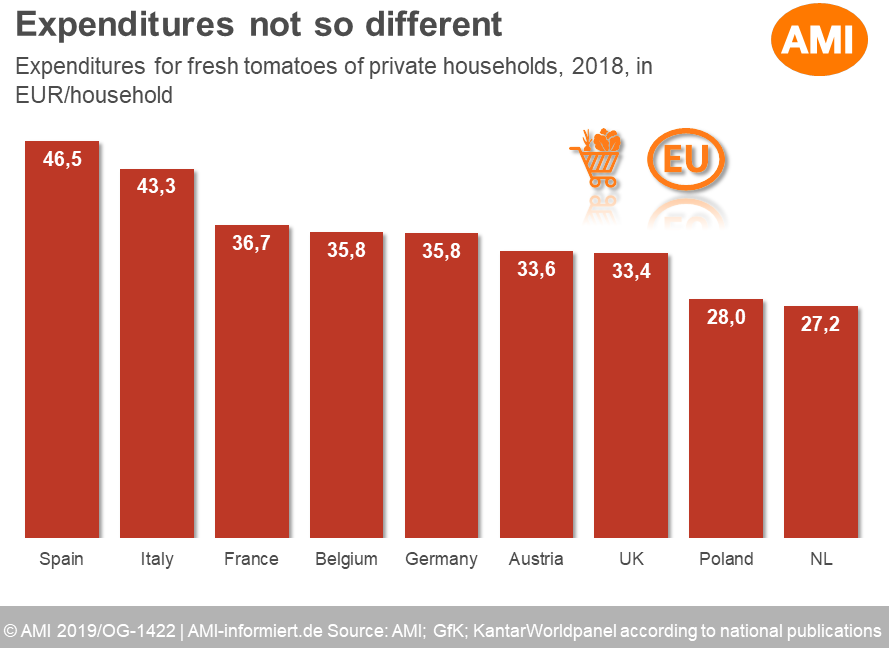 Although Spain, Italy and Poland are the leading tomato consumers in terms of per-capita volumes, the comparison on how much the different European countries spend does not show great differences.

The frequency of purchases in Germany is growing, but it actually depends on the fact tomatoes are increasingly smaller, meaning packets are smaller too. Germany is also the market with the largest share of cherry tomatoes on sale in the discount channel.

Behr also talked about organic produce consumption, which is increasing everywhere and especially in Germany. It is not always true, however, that the countries spending the most on organic food&beverage coincide with those with a larger per-capita expenditure on these products. 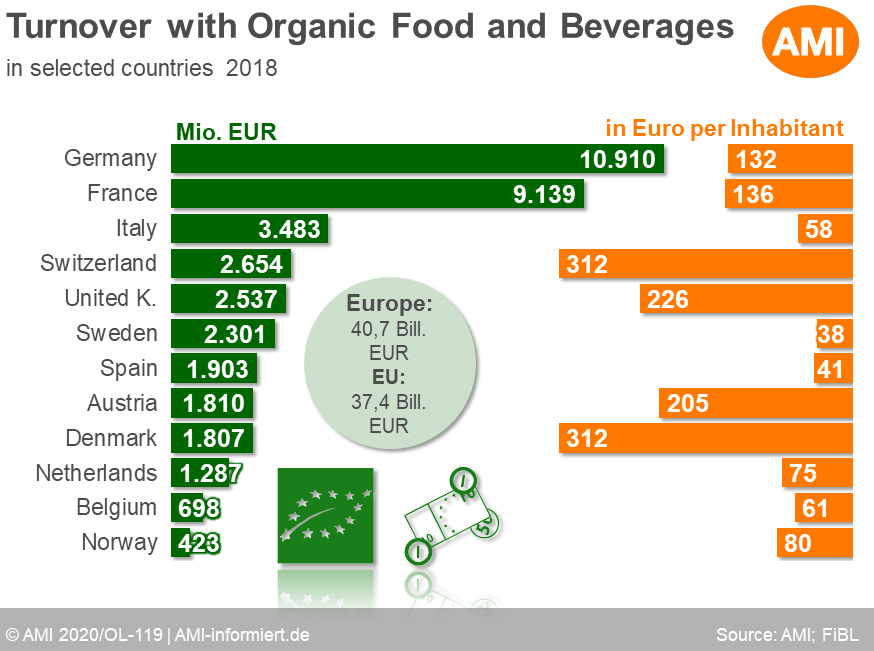 Although Germany is the country that spends the most on organic food, countries such as Switzerland and Denmark lead the way when it comes to per-capita expenses.

It is not always easy to grow cherry/cocktail tomatoes using organic cultivation techniques. Italy has the advantage that it could export organic tomatoes grown in the ground compared to other producers, such as Holland, which grow them on substrate (a technique that cannot obtain the organic certification).

Considering the fact consumers are not sure that the produce purchased in supermarkets is truly organic, these products are often bought online. 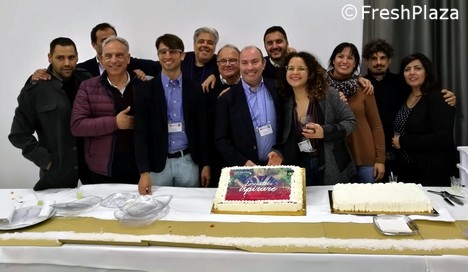