Mexico remains as the second-largest lime producer in the world. Growers there are expecting a slightly better yield this year, compared to 2019. Grapefruit cultivation has gradually increased in recent years. This is thanks to people's increased preference for including healthy foods in their daily diets.

The drought in Mexico keeps hampering citrus farming in several regions. That was the case during the beginning months of the 2019/2020 sales season. This led to a similar production level as that of 2018/2019. Eventual productions in Mexico will vary, depending on what weather conditions will be in the course of the year. According to sources, Mexican citrus export is expected to increase. That is as a result of the high international demand and attractive prices. 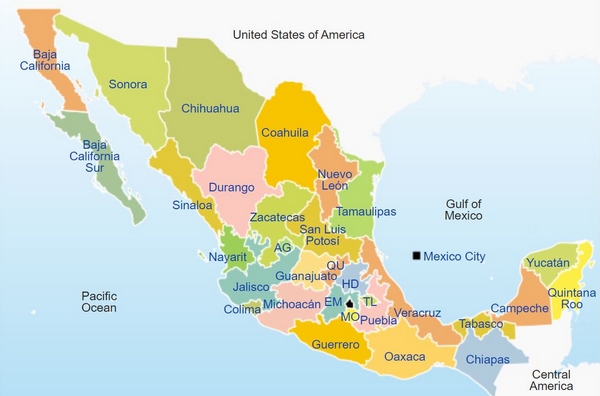 Oranges
Of all the citrus varieties, oranges have the largest acreage in Mexico. For 2019/2020, an area of 344,420 ha is expected, which is similar to last year. Sonora is a province in the North West of the country. With 28 tons/ha, this area usually has the best yields in the country.

The 2018/2019 yields in other regions were somewhat low at 13,7 tons/ha. These low yields were caused by adverse weather conditions - high, dry temperatures. The yields for 2019/2020 are estimated at 13,9 tons/ha. In total, the Mexicans are expecting to harvest 4,4 million tons of oranges in the coming year.

The state of Veracruz has the most oranges. These account for 50% of the planted area. They also made up 55% of the total crop in 2018/2019. This is according to SIAP, the Mexican Agricultural and Fisheries Information Service. Other important producing states include Tamaulipas, San Luis Potosi, and Puebla. 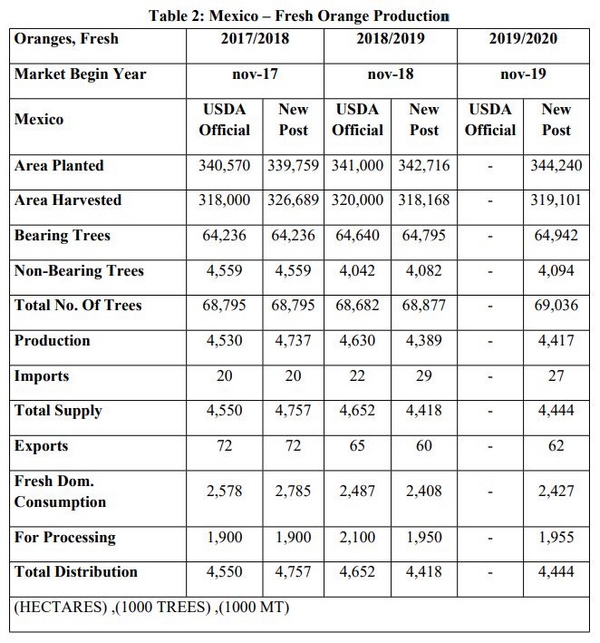 Mexico imports oranges from only the United States. These are mostly for consumption in the border regions. Mexico has a price-sensitive fruit market. Prices of imported American oranges are high compared to domestic prices. Most of the imported oranges are sold along the border or in high-end supermarkets

HLB
Mexico is facing problems with the greening of citrus fruit, or Huanglongbing (HLB). This is the case in other citrus-growing countries too. This disease is caused by bacteria and spread by Psyllidae. Psyllidae are jumping plant lice. HLB causes citrus trees to produce malformed, partially green fruit.

This disease was first discovered in Mexico in 2009. Since then, the National Service of Agricultural Food Safety and Quality (SENASICA) has implemented an extensive monitoring program for the scourge. HLB has been detected in all of Mexico's citrus-growing areas.

The states that produce citrus include Veracruz, Tamaulipas, San Luis Potosi, and Nuevo Leon. HLB has been observed in all of these. In 2019, HLB was found in Baja, California. It was discovered in orchards in the area along the border between California and Mexico.

Orange juice
In Mexico, frozen orange juice concentrate production has kept growing in recent years. That is being driven by increased international demand and consumers' changing habits and preferences. Here, the United States and the Netherlands are the most important sales markets. Great Britain is the largest growth market for this frozen fruit juice concentrate. Production for 2019/2020 is estimated to amount to 195,500 tons. This is slightly higher than the previous sales season.

Orange juice consumption in Mexico is stable. Mexican consumers generally prefer freshly-squeezed juice over commercially processed orange juice. This product is, however, used or prepared in restaurants and hotels.

Mexico is allowed to export 8,000 tons to Japan. This is at a reduced fee of five percent. This trade is based on a 2011 agreement. The country may also export 30,000 tons to the European Union (EU). This is also at a reduced tariff, but of 15%. That is thanks to the Mexico-EU Trade Agreement. Mexican exporters, however, prefer the American market and consider it to be more lucrative.

Lemons and limes
Mexico is second in line as the largest lime-growing country in the world. Besides oranges, this is the most-planted citrus fruit in Mexico. Several varieties of lemons and limes are cultivated in this country. These are Persian limes (Citrus × latifolia), Key limes (Citrus × aurantiifolia), and Italian lemons (Eureka).

For 2019/2020, an acreage of 205,102 ha is estimated. That is a tad more than the previous year. The state of Veracruz is the top Persian lime producer in Mexico. This citrus fruit is grown there throughout the year. The 2018/2019 area totaled 96,228 hectares in that state. That is two percent less than in the previous year. This was because growers had invested funds into trying to ways of meeting the local and international demand. 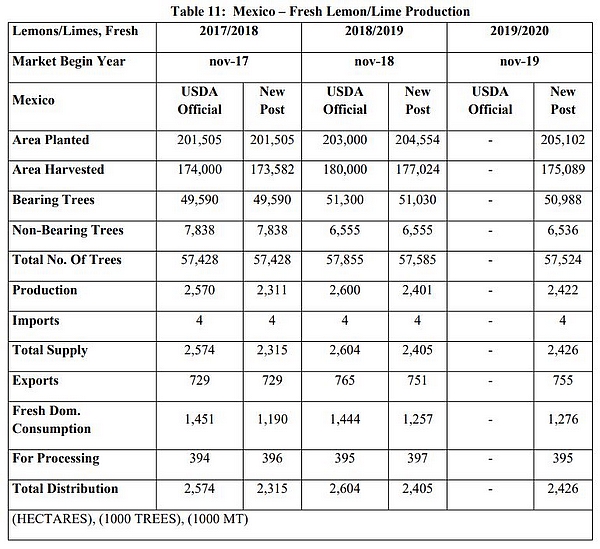 Exports of this variety are, however, increasing. In general, around 16-20% of all the Key limes grown are processed. Italian lemon farmers in Tamaulipas indicate that about 40% of their harvest goes to the export market. The juicing industry uses the remaining 60%. There are growers who cultivate Italian lemons in other states. They say approximately 35% of their harvest is destined for consumption.

The export of these products for 2019/2020 is estimated at 755,000 tons. Mexico is expanding its sales in Europe and Japan. However, roughly 40% is shipped to the United States and Canada.

Grapefruit
Mexico is the world's third-largest grapefruit producer. Three kinds of grapefruit and cultivated in that country - red, pink, and white pulp varieties. The red pulp varieties include the Star Ruby and the Rio Red. These are grown in the states of Tabasco, Campeche, Michoacán, Nuevo León, Tamaulipas, and Veracruz. They are mainly exported fresh and as peeled slices to the United States and Europe. The market for this variety is still growing. This has resulted in increased cultivation in recent years.

The pink pulp kind is eaten fresh. Market demand has fallen in recent years. People prefer the red pulp variety. The white pulp varieties are grown in Tamaulipas and Veracruz. They are used for juicing and as peeled slices. The export demand for peeled and cut white pulp grapefruit is on the rise. Farmers in Tamaulipas and Veracruz are, therefore, considering switching to these kinds of grapefruit.

The total acreage for 2019/2020 is expected to increase to 21,547 ha. This area is three percent larger than in 2018/2019. The states of Veracruz and Michoacán produce the most grapefruit. Veracruz is good for 60% of Mexico's grapefruit production. Michoacán follows with 16% and Tamaulipas with eight percent. Bringing up the rear is Nuevo Leon with five percent. 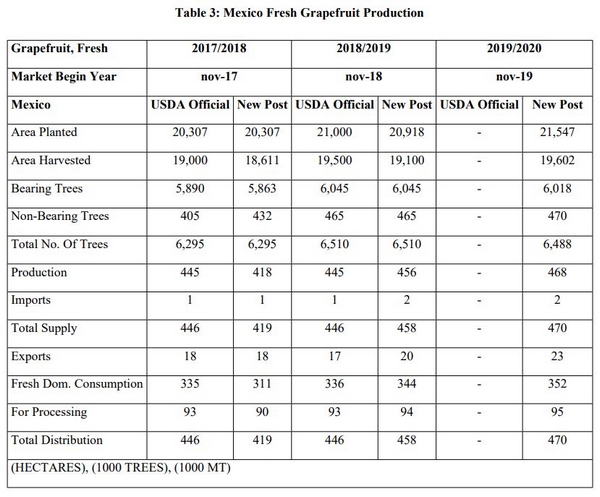 A yield of 24 tons/ha is expected for 2019/2020. This is similar to that of the previous year. Veracruz's orchards have the highest returns of 20 to 36 tons/ha. The state of Michoacán has yields of between nine and 14 tons/ha. In general, the state of Nuevo Leon has yields of 11 to 14 tons/ha.

Grapefruit use for 2019/2020 is estimated to be 352,000 tons. There is much demand for grapefruit. This increase in demand is because it is seen as a healthy, low-calorie food. According to growers and the industry, about 20% of production is destined to be processed. This estimate, however, very much depends on the international market's demand for peeled fruit. It also depends on the demand for juice in both the domestic and international markets. It is expected that 95,000 tons of grapefruit will be processed in the coming year.

Grapefruit exports for 201920/20 should reach 23,000 tons. This is as a result of higher production and international demand. The state of Nuevo Leon is Mexico's largest exporter of grapefruit. According to farmers, there is a high demand from Europe. That market also offers better prices than the US. Exports to the United States represent 30% of the trade. The remaining 70% goes to European and Asian countries.