Earlier this week, the Port of Hueneme welcomed new leadership as the Board of Harbor Commissioners unanimously voted Jess Ramirez to serve as Board President for 2020.

President Ramirez was first elected to the Board in 1992, having served five times before as Board President. Ramirez is no stranger to the operations of the Port as he has served as a longshoreman for 51 years, prior to retiring last year. With his newfound “free time” he takes the helm energized to lead the Oxnard Harbor District in furthering the green initiatives and focus on environmental stewardship the Port has become known for. 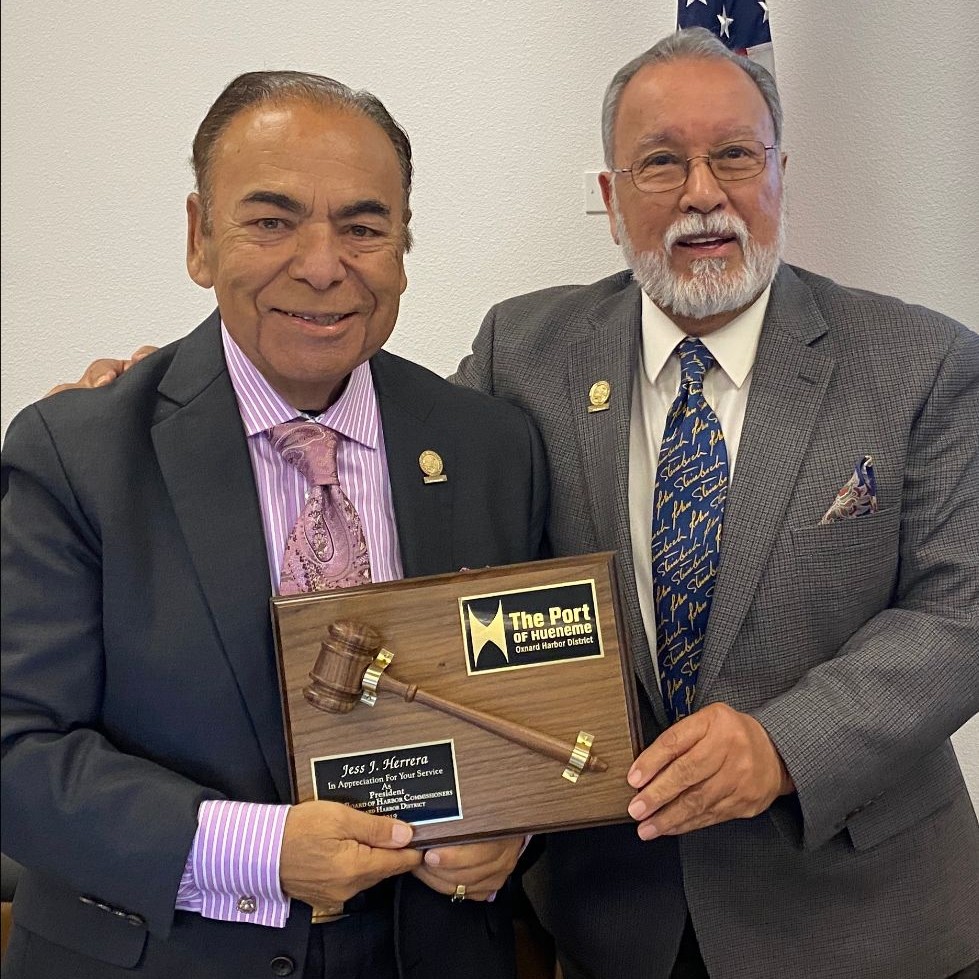 “The Port of Hueneme is the Greenest Port in America. During my tenure as Port President, I want to build on this accomplishment and usher in policies that support our economic vibrancy while moving the Port towards carbon neutrality,” stated Ramirez. “I am especially excited about an urban tree project that is currently in the idea stage, but can grow to become a model for ports around the globe.”

In recent years, Ramirez has also focused on growing community outreach through the Port. Ranging from supporting local events like the Oxnard Film Society Summer Film Series to the Boys and Girls Club, to humanitarian efforts for school children in Guatemala; Ramirez is described by his peers as having a big heart and being a “man of the people”. The new Board President’s story began in the strawberry fields of the Oxnard Plain, where he worked over 60 years ago. After his service in the Vietnam War, he went on to graduate from the University of California San Diego, and then came home to the Port to work on the waterfront. Known as Jesse by his friends, President Ramirez is not shy about the pride he has in the Port and the future it offers local residents.

“This Port gave me a future, and enabled me to put my four daughters through Ivy League Universities, including Harvard,” reflects Ramirez. “And the more jobs we create at the Port, the more families we can do the same for!”

“We continue to have strong leadership on our Board, each of our Commissioners bring a unique perspective and individual strengths to the leadership of our Port,” CEO & Port Director Kristin Decas stated. “President Ramirez’s heart for our community will be the guiding light this year in expanding our local outreach and sustainability initiatives.”

Jess Herrera
Outgoing Board President Jess Herrera gave these encouraging words as he passed the baton, “Reflecting back on this past year as President of the Oxnard Harbor District, it has reminded me what a privilege it has been to talk about an organization that employs the best and the brightest people to collaborate and innovate the best outcomes for our community, and how proud I am to be part of it.”

The Port of Hueneme is one of the most productive and efficient commercial trade gateways for niche cargo on the West Coast. The Port is governed by five locally elected Port Commissioners. The Port moves $9.5 billion in goods each year and consistently ranks among the top ten U.S. ports for automobiles and fresh produce. Port operations support the community by bringing $1.7 billion in economic activity and creating 15,834 trade-related jobs. Trade through the Port of Hueneme generates more than $119 million in direct and related state and local taxes, which fund vital community services. In 2017, the Port of Hueneme became the first port in California to become Green Marine certified and was voted the Greenest Port in the U.S. at the Green Shipping Summit.