The fruit company has launched a new reference of premium Extra Sweet pineapple from its African plantations, which it has named the SCB Ana'dou Supreme. "Harvesting is done by hand and at full maturity. It is a pineapple resulting from a rigorous double selection on the plantation - in plots specifically chosen at harvest time and in the packaging stations - which offers both a beautiful orange colouring  and a sweet sweet taste. This means that only a small percentage of our production can qualify for the SCB Ana'dou Supreme label, making this pineapple an exceptional product," says Olivier Maccarone, sales representative at La Compagnie Fruitière.

A rather quiet market
As far as the market is concerned, the French consume less pineapple in this summer period, giving more priority to seasonal fruits. "The demand is rather calm. It is much quieter both at the level of wholesalers and also at the level of supermarkets. As for supply, it is rather limited in Costa Rica for large size fruits, which explains the high prices, but more important for small fruits. In Africa, the yield is higher in terms of small fruits in CIV over this period and offers less large fruits," Olivier says.

In terms of quality, Olivier explains that while Africa is not concerned by any particular problems, in Costa Rica the fruits are not very colourful and are more fragile. This was mainly due to the climatic conditions that stressed the fruits, particularly with an alternation of a lack and then an excess of rain. "As far as prices are concerned, they are rather good on large calibres (6/7/8) and more discussed on small calibres which are more abundant". 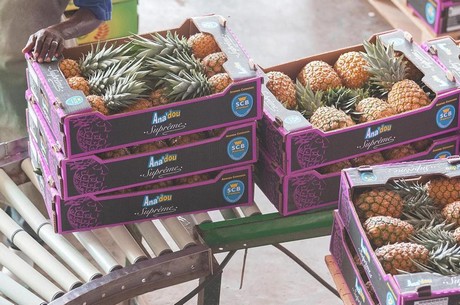 About La Compagnie Fruitière
Compagnie Fruitière is the leading fruit producer in the A.C.P. zone (Africa, Caribbean, Pacific) and the third largest European operator in the banana sector, with more than 450,000 tonnes of fruit produced in its African plantations. Founded in 1938 in Marseille, the group currently employs 20,000 people. The Compagnie Fruitière currently markets more than 800,000 tonnes of fruit throughout Europe, the Maghreb and Africa. The company has its own banana ripening network, with 21 sites located in France, England, Italy, Spain, Portugal, Hungary and the Netherlands.