A famous French candies ad from the 80s had the slogan ‘Petit mais costaud’ which means ‘Small but strong’. According to Fatiha Charrat, commercial and marketing director for Moroccan fresh produce exporter Delassus, this slogan fits like a glove to the Moroccan grapes’ production dedicated to export: “No more than 8,000 tons of the most wanted varieties of seedless grapes are available in the highly needed window from mid-May to end of July. The majority of the grapes grown for export are from Grapa, Sun World or SNFL newly protected portfolio of varieties. Most of the European importers seem to bet on this origin during that period. Morocco offers logistical flexibility: short transit time, not exceeding five days as a maximum with two days for Spain and three days for France. Deliveries can be made daily answering a tailored program. Therefore, the fruit are always fresh offering a naturally ripened flavor.”

Delassus Group aims to be the reference of grapes from Morocco, Charrat explains. “So far 200 ha are planted in 3 areas and more is on preparation. The varieties Delassus Group exports are as famous as Sable ®, Midnight Beauty ®, Ivory ®, Autumn Crisp ® and Passion Fire ®. For next season, to cope with the expanding the volume, we’ll have a brand new dedicated packhouse, well equipped to do prepacking at the source.”

“The major exporters of grapes in the international market are Chile, the USA, and Italy. In 2021, the top three grape importing countries of Europe were the UK, Germany, and the Netherlands, imported around 25% of the grapes traded globally. Producers willing to protect themselves from competition cultivate club varieties that ultimately results in stable-profit margins,” Charrat explains.

“The varieties, developed by Sun World, Grapa Varieties, SNFL or IFG are all looking for new flavors, longer calendar and better growing characteristics for farmers. These organizations license the production of their varieties. So, the producers are responsible for paying the royalties.” 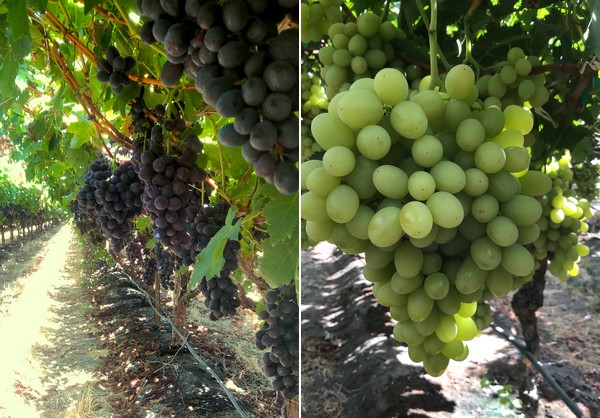 “Historically, grape plant is one of the longest cultivated by humans. This plant has been cultivated 6,000 to 8,000 years ago. Today, as per the Food and Agriculture Organization, 81 million tons are harvest in an area of 7 million hectares. Up by 6,5% in 2021 compared to 2018. Hence, such an increase in production is anticipated to create an attractive market for grape growers globally due to the increased demand from various consumers.”

When purely looking at production numbers, Morocco is a relatively small player in the market, Charrat explains: “China is the largest producer of grapes with 14,5 million tons followed by Italy with 8,5 million tons in average. USA: 7,2 million, Spain: 6,5 million and France produces 6 million tons. A large part of these volumes is the source for wine. Morocco produces 450,000 tons, of which 75% are table grapes and 21% are wine grapes. And so, Morocco remains a small producer for now. Only a very small amount is exported, less than 8,000 tons. Unlike European consumers, grape is a summer product for Moroccan consumer. The first fruits will be available in May and will last until September.”

“The main varieties grown for the domestic market are seeded grapes, such as Doukkali, Muscat, Valency, Abbou, and Boukhanzir, which occupy about 77% of the total acreage. The rest is made up of the following varieties: Alfonse Lavallée, Adari, Cardinal and Madelaine. The non-seeded varieties occupy a negligible area, not even exceeding 600 ha.”

The war in Ukraine with Russia is impacting the distribution channels in the global market, due logistics and workforce cost increases: “It is most likely that shipments will get stuck, and consignments will be on hold globally. Harvesting could be delayed due to insufficient labor availability in the fields. According to the exporters, the demand for grapes in supermarkets in the United Kingdom and Germany will go up.” Charract concludes.