Never before has the attention of consumers and, therefore, of the citrus fruit industry, focused so much on the vitamin content in oranges. FreshPlaza has talked about it with Paola Caruso, researcher at CREA-Centro di ricerca in Olivicoltura, Frutticoltura e Agrumicoltura in Acireale (CT), Sicily. 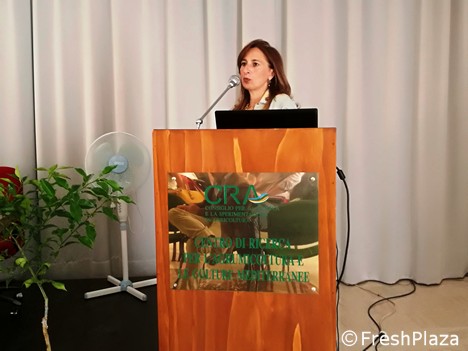 "Oranges are an incredible source of ascorbic acid, better known as vitamin C. This compound boasts a great antioxidant action and is essential for human health and plays a considerable role in the protection against cancer, in the stimulation of the immune system, in the functioning of various enzymes, in the production of collagen and in the absorption of iron," explains Paola Caruso.

"In plants, it regulates growth, blossoming and senescence processes and protects against biotic and abiotic stresses. What is more, vitamin C is used in the food industry to preserve and maintain the integrity of vegetable tissues and their by-products (juices, pulps, etc.). Finally, recent studies highlighted its beneficial effects in patients affected by the Coronavirus Disease 19 (Covid-19)".

A recent study conducted by Eurostat determined that, in terms of global consumption, oranges have occupied the second place worldwide after tomatoes over the past 20 years. Due to this high consumption, these fruits are considered one of the main sources of vitamin C. In addition, "the ascorbic acid content in citrus fruit is considered an indicator of quality."

How vitamin C is produced
"For decades, scholars have studied the mechanisms that lead to the production of vitamin C in plants and animals, but few studies have focused on the production of ascorbic acid in citrus fruit. Contrary to what you may think, the biosynthesis of ascorbic acid in plants is more complex than in animals and it is thought that at least four metabolic pathways (L-galactose, L-gulose, galacturonate and myo-inositol) are involved. In addition to biosynthesis pathways, the entire amount of ascorbic acid is determined by recycling and catabolism (degradation)."

What are the most interesting varieties from this new point of view?
"The content of ascorbic acid in citrus fruit varies depending on the species, variety and tissue. Our study assessed the content of ascorbic acid in the juice and leaves of four clonal selections (Newhall, Lanelate, Tar. TDV and Tar. Meli) with different ripening periods and presence/absence of anthocyanins. With the purpose of understanding which of the four "pathways" analyzed was mainly involved in the production of ascorbic acid in oranges, the content of the different varieties analyzed was correlated with the various expression levels of the main genes known for being involved in the biosynthesis, recycling and degradation pathways of vitamin C." 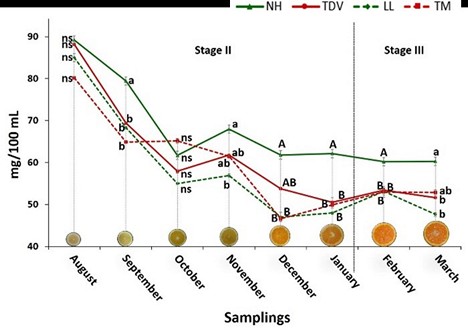 "The study showed that the accumulation of vitamin C is preponderant during the first phase of fruit development for all varieties, then it decreases and remains constant. Newhall, a blonde orange variety, was the genotype that accumulated more vitamin C than the others. There were differences when it comes to the 'pathways' leading to the biosynthesis of ascorbic acid and in the different phases of development and ripening of the fruits. When the fruits start developing, the accumulation of ascorbic acid seems to be mostly attributable to the synergic action of the L-galactose and myo-inositol pathways, while the L-golose pathway seems predominant between the end of fruit development and the start of ripening. In the leaves, however, the L-galactose pathway seems to play an important role in the accumulation of ascorbic acid compared to the others." 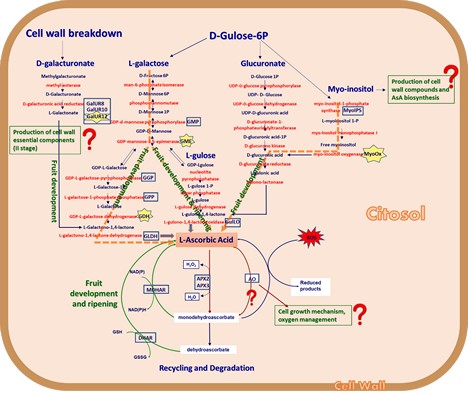 Above: concept map (click here to enlarge) of ascorbate metabolism in citrus fruit. This map represents a potential flow of reactions of the metabolism of ascorbic acid based on the data obtained from this work and previous others. Dotted arrows (in green) show the periods in which the pathway is thought to be involved. Let us hypothesize that the L-galacrose and myo-inositol pathways (via the glucurunate pathway) act during fruit development, while the L-gulose pathway is involved not only during the development, but also during the ripening of the fruit. Recycling and degradation would operate in both phases. The question marks indicate possible alternative reactions. Blue rectangles indicate the genes analyzed, while those marked with a red star are those we have found to be crucial for the accumulation of ascorbic acid in orange juice. Green arrows indicate recycling and red ones indicate degradation.

The results of the study published on the prestigious scientific magazine Plants, and therefore endorsed by the international scientific community, proved how the content of vitamin C in blonde oranges (at least for the Newhall variety) is higher than in pigmented varieties, contrary to what believed until now. However, we must not forget the relevant organoleptic and vitamin properties of red-fleshed varieties, which boast a considerable antioxidant power strengthened by the synergy of the two antioxidant compounds they contain - anthocyanins and vitamin C. In addition, the blood oranges grown in Sicily boast a unique flavor and texture, as they are cultivated in a unique environment.