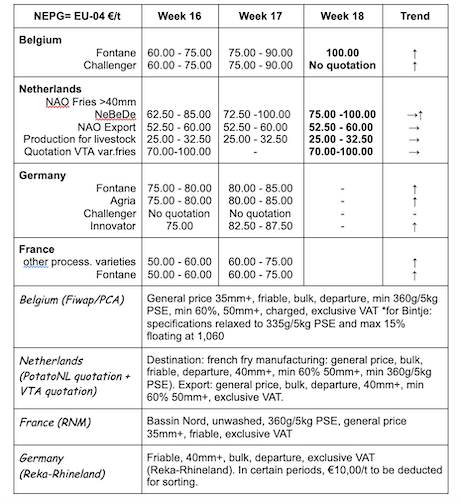 Potatoes for processing: very firm markets. Many factories are buying, in addition to the demand for export to southern Europe (Spain, Portugal) or Ukraine. Supply is low, due to the work in the fields, the low free stocks and the weather not being favorable to the growth of early potato crops, which will arrive at least 2 weeks late.

Bintje and Challenger: no quotation (although there are transactions!) due to the wide variation in prices depending on use, quality and the buyer. 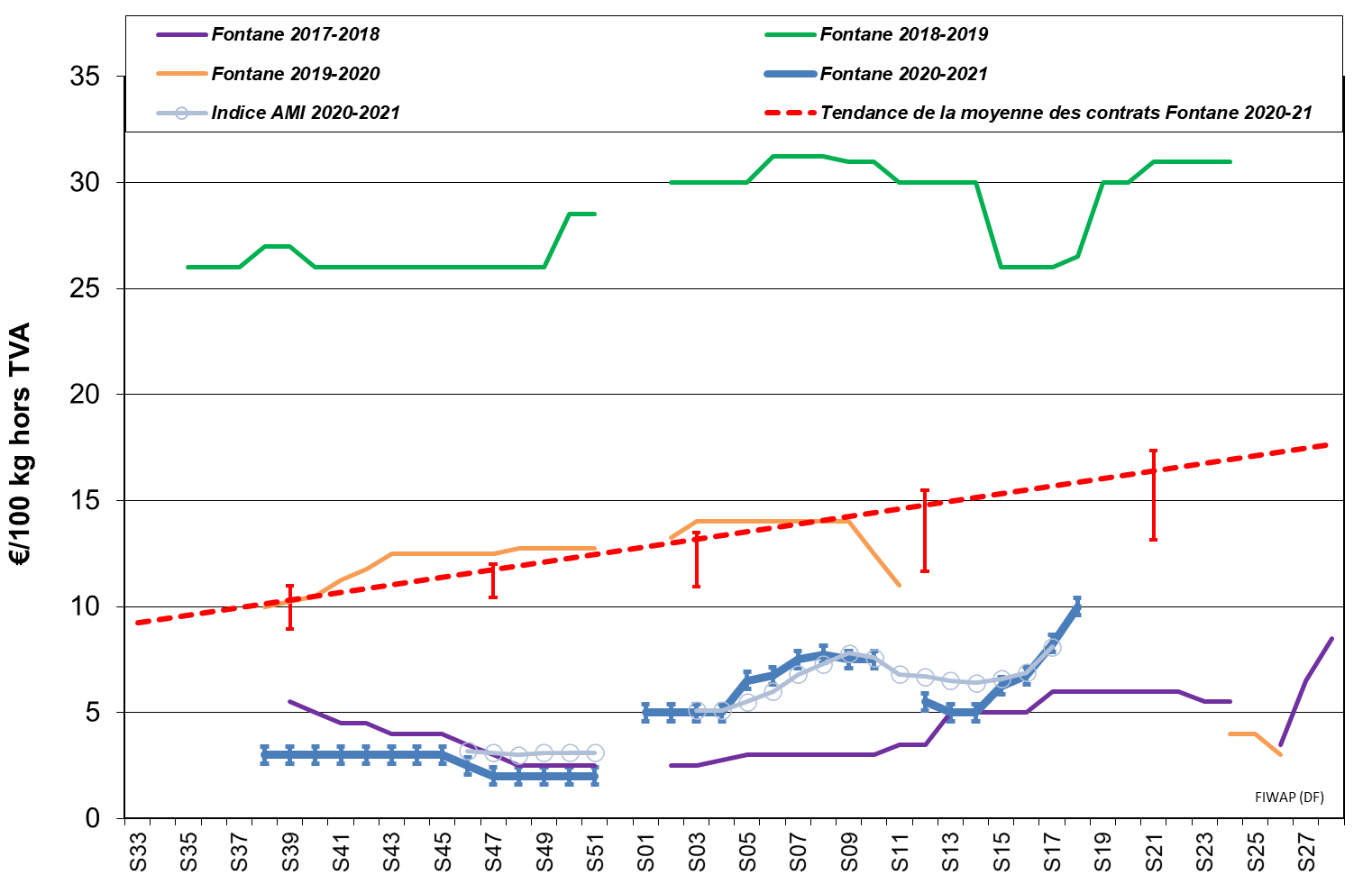 Netherlands
The sustained trend was reflected in truly higher quotations last week. The market was still divided, however, because not all manufacturers were willing to contribute to the price increase, with some making maximum use of the excess tons of contracts. Optimism prevailed as the offer is minimal and the weather prevents the crops from growing in all of western Europe. Exporters are buying again after having used their own stocks in the past weeks. The demand for eastern countries is better, around 10.00 - 12.00 €/q (calibrated packed departure). To the south, Spain and Portugal guide the trade with prices up to 16.00 - 19.00 €/q for the large Agria calibers for example, stored in refrigerated pallox. Export to the Caribbean and Africa remains bleak. On the domestic fresh markets, the volumes continue despite the gradual arrival of imported early varieties. In the fields, about 75% of the surfaces were planted as of April 28th. On the coast and in the polders, between 10 and 40mm of rain fell, while the more inland regions remained without rain. 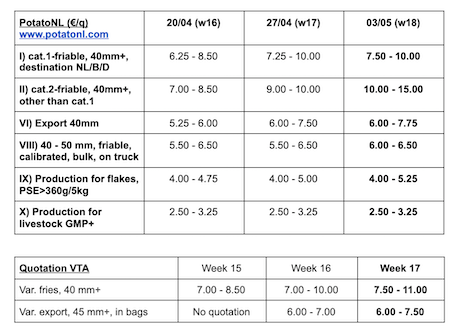 On April 28th, the planting (all regions combined) was estimated at 90%, most conducted in very good conditions. Now, warmer temperatures are needed for them to emerge and water for weeding.

Processing: more transactions on the free market last week, between 6.00 and 7.50 €/q, with very variable volumes depending on the manufacturer. Intermediate trade was also still buying at sometimes much higher prices. Globally, contracts are removed on time. On the fresh markets, the campaign is coming to an end, with higher prices for the last nice batches available (Agria, Mozart). In export, Romania and other eastern countries are showing some interest, while Spain continues to buy varieties for fries. On the domestic market, the transition to early varieties (including Spanish) is underway, with some disputes over the old harvest and a high number of defects detected.

Germany
Consumers bought more potatoes again in March 2021 than in March 2020! It is only a 0.7% increase, but in March 2020, it is was a 26.6% increase compared to March 2019!! With the cold temperatures and the asparagus being so expensive, consumers still preferred the “old” potatoes, leaving the “Mediterranean ones” aside. The fresh market remains unchanged. Fresh market (early and semi-early): prices for firm flesh at 10.83 €/q (11.00 €/q, quotation before last), and for soft/mealy flesh at 10.25 €/q (10.42 €/q, quotation before last). But the merchandise from refrigerated crates-pallets is 3€ higher (see REKA prices in table below!).

Planting of early natives: the irrigations to protect against frost continue! Due to the cold, the first early varieties for peeling (pre-germinated, under tarps) are expected after mid-May, and the first “peaux faites” around mid-June.

Prices were globally unchanged, but the very good batches are rare, which leads to higher prices. There is still some demand for the firm flesh varieties, and the prices for the top quality are getting higher as well, even for the second quality batches (the top quality is getting scarce). With the lockdown being lifted, (collective) catering is buying again, and the varieties for fries benefit from higher prices. The peelers are paying 18.00 to 22.70 €/q for the best batches of Sagitta and Performa, and up to 23.75 €/q for Markies, or 34.00 €/q for top quality calibrated Agria. Few purchases, on the other hand, for the industry, with some Belgian Fontane and Agria in the offer, but the buyers are prudent about the delivered quality. Maris Piper is sold between 7.35 and 15.80 €/q, depending on quality, caliber and buyer (factory or peeler).

Stocks at the end of March (source: AHDB) were estimated at 1.2 million tons, similar to last year, but 90,700 tons more than the average of the past 5 years.