"Constantly tinkering, improving and creating new things for many decades"

Vorarlberg family business 11er celebrates its 80th anniversary on March 7, 2021. The foundation for this was laid by Wilhelm Grabher in 1941. With the idea of supplying the surrounding villages with fresh fruit and vegetables, he and his three brothers founded a traveling vegetable and fruit trade in Lustenau. The 11er company became large and well-known in the 1970s with the production of golden french fries, for which 11er is still known.

Today, 11er is already managed by the third generation and is the leading frozen potato specialties manufacturer in Austria. 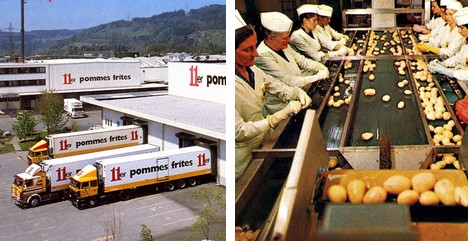 The beginnings 80 years ago
The Grabher family has always had a pioneering spirit. The company's history began on March 7, 1941, with the founding of a mobile fruit and vegetable trading business in Lustenau. The four Grabher brothers Wilhelm, Rudolf, Ludwig and Ernst had set themselves the goal of supplying the surrounding communities with the best fruit and vegetables with the then company "Wilhelm Grabher & Co, Landesprodukte, Versand und Großverteiler, Südfrüchte" - initially with horse and cart, later with a small truck.

In March 1986, the parent company was divided in real terms and three family businesses were launched: Tiefkühlexpress Grabher LLC, FruchtExpress Grabher & Co and today's 11er Nahrungsmittel LLC. The name "Elfer" originated over 100 years ago and can be traced back to a common naming custom in western Austria, as the Grabher family had 11 children. This name runs through the 11er company history and is now an integral part of the company logo.

50 years of 11er French fries
Not everything at 11er has always revolved around the tuber. In 1968, 11er founded the site in Frastanz and gained a foothold with the production of sauerkraut. With the beginning of increasing demand from the catering industry, the company switched to the production of French fries in 1971 - 50 years ago. This made the family business big and well-known beyond the country's borders. With 11er Pommes, the company also made the leap from the restaurant to the grocery store. Since then, the golden-yellow French fries have also been available for enjoyment at home.

Focus on potato products
11er's credo soon became clear, with the aim of always getting the best out of the potato. Thus, at the end of the 1980s, the company established its first own line of potato specialties. This laid the foundation for today's 11er crispy rösti and fine 11er croquettes. Characterized by the highest level of innovation and meticulous tinkering, 11er succeeds in delivering the finest delicacies from Austria to the retail and food service sectors through specially developed recipes and regional ingredients.

Only yellow-fleshed potatoes from the best growing areas along the Danube and March rivers in Austria and from the southern Bavarian region are used to produce 11er potato specialties. "We are convinced that only the very best quality is good enough. That's why 11er has always been constantly tinkering, improving and creating something new," Managing Director Thomas Schwarz emphasizes.