There’s a lot of excitement about kiwis and the issues driving it, are twofold: on the one hand, farmers in other sectors like forestry or dairy looking for foreign earnings, or trying to concentrate their activities to fewer hectares.

And then, continues Peter Turner, director of Variety Innovations B.V. and SA Kiwi Pollen, there is the heightened interest in kiwis in the market due to its vitamin C content, two-and-a-half times that of citrus.

There is a slim window when there are low Northern Hemisphere kiwi volumes in the market, but in time that door will probably be closed by other kiwi producers. “Our philosophy is to enter the market during that period with very high quality and maintain the market going forward through linking with Northern brands in a counter-seasonal partnership.” 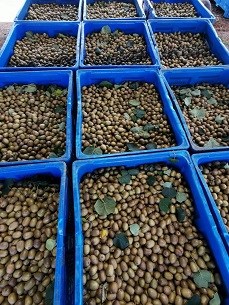 “We started the Soreli project in South Africa in 2014. We are only seeing excellent sustainable production now,” Peter says. “It takes time to learn the requirements of new varieties in different climactic zones around the world.”

European buyers have been impressed by the quality now coming from the earliest production from the Mpumalanga escarpment, says Peter, where there’s a combination of a Highveld and Lowveld climate.

There is a degree of diurnal range, which is crucial. He says the torrential rain of a month ago had them worried but the first few containers now on the way to Europe have vindicated the growers.

Slowly but surely Variety Innovation has been working with their growers, aided by international technical experts, and this year everything has just come together. 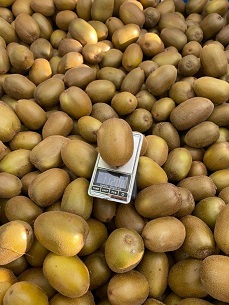 “This year the guys just are in a different place, the quality is fantastic. They’ve packed very good sizes, very good dry mass. You can just see the growers are vindicated that they made the right choice to plant in the right area with the right management. They’ve got a variety that’s working for them and it’s based not on smoke and mirrors, but on fact and response from the market. Their fruit is meeting the very high standard of the Oscar’s Gold brand.”

At this stage fruit is marketed through five other channels as well: Agricolli Bio, Kiwi Gold Company, FreshWorld, Zest and Gold Kiwi. “We’re trying to create the shortest possible route for South African growers to the market. We manage Soreli in twelve countries. We have people who’ve been growing and marketing Soreli since 2010 so they’ve already established a market with a loyal consumer base. All we’ve done is to create this counter-seasonal partnership with Oscar’s Gold, with the German-Italian company AgricolliBio, Kiwi Gold Company, focused on the African market, and then through South African company Freshworld which is also doing some Soreli kiwi. We give growers a choice and then we report back to the growers on how these channels have performed.”

In the Southern Cape the Soreli harvest is about a month away, but the fruit is already at harvesting standards, Peter notes. 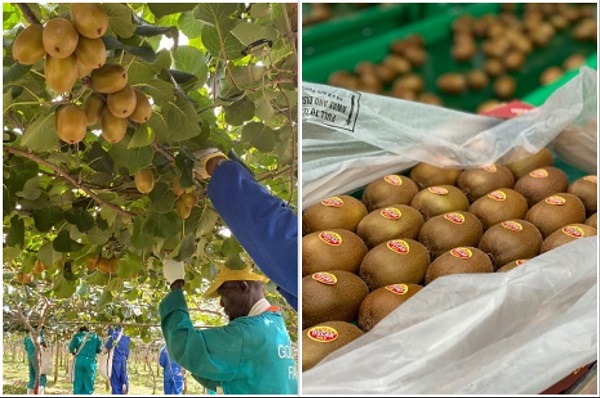 “It’s very exciting for our industry. It shows we can produce the quality and in a conservative, low-key manner we’ll expand the base of this production because the signs and the results in the field validate that we should be expanding.”

Check list when considering kiwi production
“In some of the excitement we’re re-enacting some of the same mistakes made in the 1980s,” Peter cautions; the areas suitable for kiwi production in South Africa are limited. Mistakes can be costly – up to a million Rands per hectare. There are growers who established kiwi orchards but five or six years later, they have never taken off a crop, he remarks. Proper homework will avoid a lot of pain.

There is a two-year waiting list for kiwi vines in South Africa.

A dearth of trialling data has compelled him to compile a tool kit to aid interested parties in deciding whether kiwis are for them, regardless of the kiwi variety. 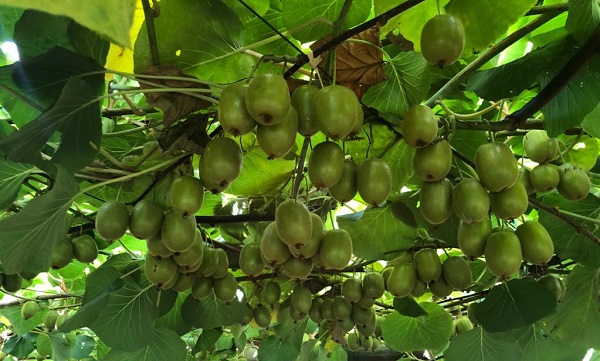 The first point concerns the required chilling units. “The lowest chilling requirement for any commercial variety in South Africa is 450 Chill Units. Inadequate chilling leads to poor crop loads, mixed maturities and unsustainable farming. Make sure that your area has at least a 20% safety margin in chilling units given that most areas with adequate chilling have three to four years of poor winter chill accumulation in a ten-year cycle.”

However, frost during October is a problem as kiwis are very sensitive to frost and wind during flowering. “In summer rainfall areas with episodic rainfall events, a site with a degree of slope is very important. Southwest-facing slopes are ideal.”

Peter advocates a conservative approach to varietal choice and he advises growers to visit successful orchards and trial blocks with similar microclimates to theirs, obtain the commercial track record for a particular variety, particularly locally. 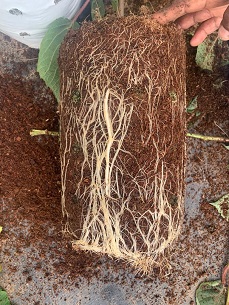 It is a water-hungry crop, Peter points out, and it doesn’t tolerate salinity and accumulated salts either in the water or the soil. It is very sensitive to nematodes, which is dependent on previous crops as well as the water source.

Right: root development on a kiwi vine at De Vos nursery in Waboomskraal

“A careful choice of cover crops and treatment options need to be considered, using kiwi specialists.”

There are misconceptions regarding the possible income from kiwis and to form a realistic picture, Peter says, a potential grower should ask other kiwi growers for their ten-year average price return.

“In the early years when volumes are low, the guys get fantastic returns and people who are not growers compute those returns and make a sum in their minds that are not realistic.”

Adequate storage and shelf life among the various varieties should equally be considered.

Interested parties are invited to two upcoming field days: on Wednesday 3 March from 10am - 12:30pm at De Vos Kwekery, Waboomskraal, and on 11 March in Grabouw.