The lemon season in Spain, Italy and Turkey is ending earlier this year. The demand on the European market is high, while volumes are lower than last year. The fact that the demand has increased has everything to do with the coronavirus crisis, because the fruit is a great source of vitamin C. Argentina and South Africa, the two countries responsible for most of the exports to the European market, have already started. The favorable prices in Europe and an early start of the season is an excellent opportunity for these countries. In addition to Californian and some Argentinian lemons (which have been on the market again since 2018), the US also expects Mexican ones. Some traders are wondering whether the demand will remain stable or we'll soon be flooded with lemons. Looking to the future, China also seems to be developing into a major exporter of lemons. 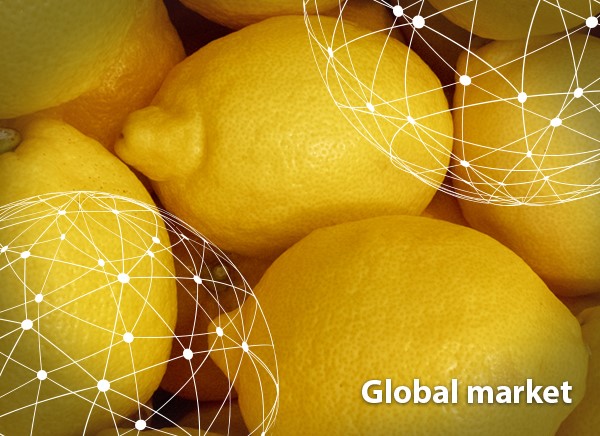 Argentina: Despite lower production, lemon exports are growing
Argentina has started early this year. The season kicked off in March with the first exports to Russia, Ukraine and Canada. Exports to the US followed in April and to Europe in early May. Russia and Europe remain the most important sales markets, but with the reopening of the US market in 2018, a lot of effort has been put into expanding there. Exports to the US have been somewhat delayed due to the measures taken against the coronavirus by Argentina. The growers have had no reason to complain about the weather, which has resulted in a strong harvest. The production volume is a bit lower than last year; however, exports are forecast to reach about 300,000 tons. The total harvest in the 2019/2020 season is estimated to amount to 1.8 million tonnes, with most of that intended for the production of lemon juice concentrate and lemon oil.

South Africa: Faster pace of lemon exports together with early start of the season
The South African lemon industry is being very cautious with its export prospects. Large volumes are now on the way, but the large volumes from South Africa and Argentina may put pressure on the market. Exports are currently predicted to amount to 27.1 million boxes (15kg each), which is 5 million more boxes than last year. This increase is mainly a result of acreage expansion. Although the planting of new lemon trees has slowed down, more than 43% of all South African trees are four years old or younger.

The season started earlier this time. The volume of lemons exported is already greater than last year, with much of it going to the Middle East, which demands early lemons. After years of high demand from Russia, this year's exports there have fallen. The economic developments in these oil producing countries are a cause for concern for some exporters, as they create uncertainty about the consumption patterns. South East Asia is currently a disappointment for some exporters, but it is hoped that normal consumption patterns will be restored soon. Exporters in South Africa are also keeping track on China's growing lemon exports.

Netherlands: Can the price stay up?
With the campaigns about to end in Spain and Italy, and with Turkey no longer allowed to export lemons at all, traders are getting ready for the lemons from the Southern Hemisphere. In early May, the first reefer ship with Argentinian lemons had arrived already in the port of Vlissingen, a stopover on the way to Saint Petersburg. While one trader has optimistic prospects for the coming season, the other is, in his own words, more realistic. The sustained high demand from the retail sector and, in the future, the reopening of the catering industry in the summer, with high prices paid for the fruit, contrasts with the fears of a lemon surplus from South Africa and Argentina. The prospect is that South Africa will export more volumes to Europe, and Argentina, with its new plantations, will do that too, so prices may come under pressure.

Germany: High demand leads to early end of the Spanish season
Around Easter, the demand for lemons in Germany was - like other years - very high. However, an additional increase was observed this year. "This has to do with the high vitamin C content of lemons, given that it arguably helps strengthen the immune system. Due to the coronavirus, there is extra demand for such products, including lemons," said a trader.

The higher demand is having an impact on the sales situation. "Although there is a shortage of lemons, the storage and packaging capacity hasn't been large enough for a while. The urgent need for large volumes led to a rapidly declining stock of Spanish lemons." This applies to both conventional and organic lemons of the Verna variety, which are mainly imported from the Spanish growing areas of Murcia and Malaga. For that reason, people are also counting on an early end of the Spanish season.

After Spain, Argentina normally follows, although the situation there is currently difficult to estimate. "We import the Eureka variety from Argentina. It is said that large volumes are available, but we'll only know this once the product is in containers, on its way to us," they say.

France: Switch to the Southern Hemisphere
Lemons are currently selling well in France. Especially because of the positive health benefits that are linked to the fruit. The Spanish season is almost over. Due to the excessive rainfall in Spain during the spring, there were some quality problems, but these were resolved later in the season. South Africa and Argentina are now entering the market.

Spain: Earlier end for Verna lemons this season
The craze of previous weeks, with insanely high demand and prices for lemons, is now over. The coronavirus continues to have a strong impact on the demand, although it remains difficult to sell class 2 fruit and large formats. Spain has now completely switched from the Primafiori to the Verna, with yields expected to be 30-40% lower than last year, so the season will end earlier. There are many large sizes, since there are fewer fruits per tree. Although prices have fallen in recent weeks, they remain favorable for the growers (0.72 to 0.85 € / kg). High prices in Europe have encouraged Argentinians and South Africans to export lemons to the European market earlier. The first lemons from Argentina arrived in early May, and now a large number of reefer containers loaded with lemons are on their way by sea.

Italy: More demand, fewer lemons
In Sicily, the lemon production is currently at its lowest level in 15 years. "Throughout 2020, the sales price has remained high, with an average of € 0.75 / kg," says a Sicilian grower. “Our lemons are shipped to Northern Italy, France, Austria, Germany and the Netherlands. The problems with Mal Secco (Phoma tracheiphila) persist."

There has been a decline in the supply of Syracuse lemons due to the unfavorable weather conditions of the previous season, but the demand for these lemons is growing, partly due to a reduction of imports from Spain. Prices at origin have therefore increased from 0.75 to 0.95 € / kg. Many entrepreneurs in the Syracuse area are investing in lemon cultivation by expanding the acreage. These new areas will only come into production in 3-4 years. Primofiore lemons will continue to be harvested in Calabria for two weeks. The season in Calabria has been extended by 30 days due to rainfall last week. The 2019/2020 campaign was good for the lemons due to increased market demand. The sales prices amount to around 1.20 / 1.30 € / kg but they are expected to increase by 20 cents in a week if the supply continues to fall.

Turkey: Lemon exports will stop until August
Due to the measures introduced to stop the spread of the coronavirus, the country's lemon exports have stopped until August 2020. However, news has reached us that as of Thursday, the lemon exports up to 10,000 tons have been approved. Expect more official news on this subject to follow next week.

China: Export of lemons from China on the rise
In China, lemon exports have increased significantly in recent times. Due to the coronavirus, consumers are trying to purchase more products with vitamin C in them. As a result, the demand for lemons has increased and the price of Chinese lemons has risen over the past few weeks. Chinese lemons are mainly grown in Chongqing and Sichuan.

United States: Strong demand from the retail
Lemons on the US market currently come from two regions. On the one hand, there are lemons from California, where the second district is currently in production. California is able to produce lemons year-round. On the other, there is Mexican fruit, with large volumes of it expected in 3 to 4 weeks. The Mexicans remain on the market for 9 months. Argentina, and to a limited extent Uruguay and Chile, also export lemons to the US market.

The food service normally absorbs steady volumes of the product from traders, but due to its closure, many lemons are now kept in storage. The demand from the retail has increased sharply; however, as soon as large volumes of Mexican lemons enter the market, the prospect is the supply will increase and prices will fall.

Australia: Expansion for the domestic market
Lemons are grown year-round in Australia. The acreage devoted to citrus in the country is growing, but most lemon trees are still in the growth phase. Last season, 48,232 tons of lemons and limes were grown. 79% of that corresponded to lemons and only 7% of the total was intended for the fresh market. Last season, 4,000 tons were still imported, but with the expansion of the acreage, mainly in Queensland, the country hopes to keep reducing that volume. The industry still sees plenty of growth opportunities in the domestic market and is trying to capitalize on that with promotions and campaigns.

No global market report next week. On week 22, we'll be back with an overview of the global stone fruit market