After a period with high prices on the European market, the balance between supply and demand seems to be restored. The high prices earlier in the season were due to shortages. Now that there is more supply and the demand is a bit quieter than normal, prices are stable again. There are more origins on the market, such as Israel, Spain, Colombia, Morocco and the Dominican Republic, and also more varieties. 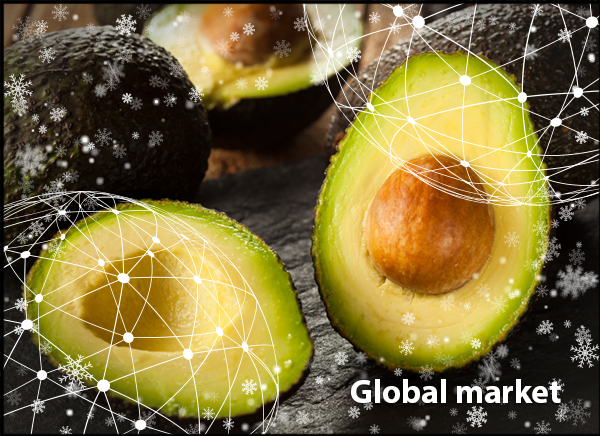 In the US, Mexico still dominates the market around this time of the year, while the market share of other countries, such as the Dominican Republic and Colombia, who are expanding their acreage, is growing. In China, the fruit's popularity continues to rise, and in addition to the supply of Chilean avocados, the first batches have been imported from New Zealand.

The Netherlands: Quiet avocado sales ahead of Christmas
According to Dutch importers, avocados cannot be considered the green gold of Christmas this year. They say that, at the moment, the sale of most sizes is going quietly, partly due to the large supply. The prospect is that this will slightly change again in the New Year.

Belgium: Market on the mend
After a period of low supply and extremely high prices on the avocado market, the supply has grown again and prices have fallen somewhat. According to a Belgian trader, prices have returned to normal. Avocados have become extremely popular in Belgium in just a few years, but due to the high prices of recent months, some consumers found them too expensive. Due to the high prices for Hass avocados, greenskin prices also rose and sales increased.

Germany: Quieter market situation
Hass avocados are still ubiquitous on the German avocado market. This variety is currently mainly imported from Chile, Mexico, South Africa and Peru. Other varieties and origins are also popping up here and there, including the Carla, from the Dominican Republic. This variety is characterized by its large dimensions (more than 1 kg per fruit) and costs 2 Euro per piece in the wholesale market.

Until a month ago, the avocado market had to contend with considerable shortages and the prices for both ready-to-eat and green avocados were up to twice as high as usual. In the meantime, however, the situation has again become quieter and prices have stabilized.

France: Market situation recovers following supply of Spanish avocados
The French market was out of balance last month, with high prices reaching up to € 25 per package. The Spanish season had only just kicked off and the first avocados on the market were not yet of good quality. However, the market is currently recovering, now that more avocados from different production countries are on the shelves. The prices have dropped to around € 10 per package. The quality of Spanish avocados has improved as the season progressed. At the moment, consumption in the country is lagging somewhat behind due to social protests.

Italy: Rising prices in the run-up to Christmas
Together with mangoes, avocados are the product that has seen the greatest growth in Italy in recent years. The demand has grown exponentially over the last two years. Buyers used to have little knowledge about avocados, but that has since changed and they are choosing the products more carefully. The Pinkerton variety is on the rise, as is the Hass Gold Selection. Most avocados currently come from Spain and Israel. The demand is growing in the run-up to the holidays, and so is the price for the product, which can amount to around € 15 per 4.5-5 kilos. Many restaurants are demanding the product in order to use it in their dishes. Avocados are also increasingly popular as an ingredient of cocktails and fruit-based dishes.

Spain: Pressure on prices due to large supply
In the last week of November, the harvest of Spanish avocados started in Malaga's Axaquía, the most important avocado producing region. The revenue generated is comparable to last year's. Nevertheless, a higher volume is expected due to the expansion of the acreage in the rest of Spain (Cadiz, Huelva and Valencia) and the entry into production of new plantations. The yield in the Malaga region is bigger but with the same acreage as previous year. The Spanish acreage now stands at around 15,000 hectares. For further expansion in the coming years, Spanish growers are looking to neighboring Portugal.

Spanish avocados arrived in a European market supplied with a wide range of avocados from other countries, such as Chile, Colombia, the Dominican Republic, Mexico, Israel and Morocco, and seven different varieties. The wide range and diversity is having an impact on field prices. In the beginning, the Spanish fruit was sold for around 3-3.50 € / kg, but that has now dropped and the prospect is that it will stabilize at 2 € / kg. Consumption in Spain is increasing and some supermarkets have reported a tenfold increase in their sales in 5 years. The growth in consumption is important, as it makes it possible for the large volumes of avocados to be absorbed by the market.

Morocco: Volume increases by 150%
The Moroccan acreage devoted to ​​avocados has grown by more than 150% compared to last year. The fruit's quality is comparable to that of the Spanish production and Morocco is finding more opportunities to export the product to the European market.

Dominican Republic: Greenskin becomes Tropical avocado
In addition to Hass avocados, there is a large supply of Greenskin avocados, whose season started in October. The volume is similar to that of previous years. Even though the demand for Greenskin avocados is increasing, some want to improve its market reputation. Large distributors of the Greenskin have therefore renamed the variety as "Tropical avocado" in order to stimulate sales. Consumers are responding positively to this. The Dominican Republic wants to start exporting avocados to China soon.

Mexico: Smaller volumes in Michoacán, but the country remains the number one producer
The country maintains its position as the world's number 1 in the production and export of avocados. Mexico grows avocados year-round, with a low season in the summer months. In Michoacán, the volumes of the winter harvest have been somewhat smaller than normal due to the rainfall. The most important export market for the state is the US, where the demand reaches its peak in February, around the time of the Superbowl. Growers in Jalisco export to other parts of the world. There are some challenges for Mexican growers to export to Europe, as they have to deal with strict requirements in terms of MRLs, certificates and sizes.

Colombia wants to expand the cultivation of avocados and increase its market share
Avocado cultivation is growing in the South American country and a lot of energy is spent on expanding the acreage and increasing the market share. New export markets are also being found. Colombian avocados used to be shipped mostly to Europe, but since recently they are also exported to Chile, Saudi Arabia and Japan.

Peru: Lower volumes due to natural cycles, acreage expanding
As with many other products, this year has been an off-year for Peruvian avocados. However, that situation is normal given the natural cycles and not alarming. Avocado cultivation has been expanding in recent years and the country's season is getting longer. The campaign takes place in the summer months, coinciding with the low season in Mexico. This allows Peru to supply the US market with avocados. Peru also wants to expand its share in Europe, where it now has a share of around 30%.

China: Growing popularity
Avocado is becoming more popular in the Chinese market. More and more consumers are discovering this fruit, but still more promotion is needed. Many people still have to get used to the fruit as part of their diet. Currently, the sale of avocados is not running that smoothly. The price is fluctuating, with many Chilean and Mexican avocados on the market. This year has been the first with New Zealand exporting large volumes to China. The first shipment arrived in October. The price for New Zealand avocados was immediately much higher than that of Mexican and Chilean fruit, as a better quality was expected and hence a higher price was demanded.

More and more supermarkets and fruit stores are selling ready-to-eat avocados, as they are popular among consumers. More restaurants are also using avocados in their dishes, which is a good way to further promote them in the country. In addition to the import of avocados, China is also working hard to try growing avocados itself. In a number of places, such as Guangxi and Yunnan, this is now going well and the prospect is that Chinese avocados will also hit the shelves in a few years. This will have a major impact on the Chinese avocado market as a whole, especially on imported avocados.

United States: Demand for Mexican avocados should increase
The US market is currently well-supplied with avocados from Mexico. The sizes range between 48 and 60, with a growing percentage class 2 fruit, which now accounts for around 35% of the market.

Mexico currently dominates the North American market, although there is also a small supply of Chilean avocados. The start of the California season is expected within a month. The prospects are better than last year, when there were many problems caused by the weather. California will probably start the season early if problems arise with the supply of Mexican avocados due to the weather conditions or politics.

The demand for avocados is currently lower than normal. October and November are traditionally the months in which the demand is lower than in the rest of the year, but it starts increasing again ahead of Christmas. That is why prices are currently quite low. Transport can be a challenge during the holidays, when there are few trucks available and borders can be closed. However, stocks of avocados in the US are sufficient at the moment.

Australia: Avocado consumption is increasing
Both consumption and production are increasing in Australia. On average, 3.8 kilos of avocados are now consumed per person in the country, and the production has grown to 85,546 tons in the 2018/2019 campaign, compared to 77,032 tons in 2017/2018. By 2025, Avocado Australia expects the volume to grow to 115,000 tons. Slightly more than 3,000 tons are intended for export, with the most important markets being Singapore, Hong Kong and Malaysia.

New Zealand: 3 million boxes intended for export
The country harvested 31,424 tons of avocados in the 2018/2019 season from 3,795 hectares. Nearly 3 million boxes were exported, according to the data from New Zealand Avocado.