“The year 2018 started under particularly difficult market circumstances in the fruit and vegetable world. We came from an incredibly productive year, and as a result, the market situation for all winter vegetables was plain bad in the first quarter, including for leek and greenhouse lettuce, REO Veiling’s most important products. The sales of tomatoes were also under pressure in the first six months of the year. Compared to 2017, this caused a decrease in turnover for REO Veiling of 50 per cent in the first quarter of 2018,” says Paul Demyttenaere, manager of REO Veiling.

“Considering this difficult market situation, we were criticised by various groups for cooperatively marketing fruit and vegetables in Flanders in March. Know that I understand the frustration of our producers perfectly. However, what I don’t understand is that those from outside of the cooperation shouting the loudest are now remaining quiet as mice. Good news has hardly any messengers. In any case, this proves that a lot of people definitely don’t look at the market in the long term.” 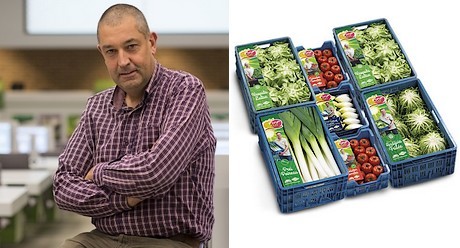 Great year
In April, REO Veiling’s market situation changed for the better. “In the summer period, the situation changed completely, and because of the dry weather throughout Europe, scarcity could be noticed. Intensely following and taking care of the productions in the field by our member producers didn’t just ensure constant supply, it was also rewarded with a period of strong pricing. The strong demand from the European market for greenhouse lettuce, cucumber, leek and outdoor vegetables our region is known for, was valued by the market. Valorising this demand means 2018 became a great year after all. Without an insight into the complete turnover of REO Veiling in 2018, we already know it was the best year ever,” Paul continues.

“Our domestic market is growing in Belgium and France”
“The past year once again shows that we’re deciding when it comes to outdoor vegetables in Europe, and our leek production shows this best. West Flanders continues to be a leading region for marketing leek. In pricing, we can really make a difference compared to other European regions. Besides, the production of vegetables in our border-crossing region is becoming more important. The development of the greenhouse horticultural zone based on residual heat in Roeselare is an important development in this. The production of vegetables in North France is increasing in importance and strengthens our market position as a local player on the French market. In recent years, we grew considerably regarding the production of tomato and cucumber, and our region also shows a significant growth for the coming year,” Paul says. “In 2019, REO Veiling’s tomato production will increase by 34 hectares, and the local French production will become good for 30 per cent of our tomato sales.”

E-commerce
In the past year, REO Veiling and colleague auctions, Coöperatie Hoogstraten and BelOrta conducted an investigation of IT supportive processes. “A number of options and suggestions emerged from this to ensure we will continue to perform well and be modern in the coming years,” the general manager explains. “We sometimes forget to emphasise that Flemish auctions are the sector with the strongest E-commerce of Belgium. Sixty per cent of our turnover is achieved via the internet, meaning E-commerce. However, we have to continue to think about how to embrace modern technology in our permanent striving for modernisation and improving our European market position. This is our challenge for the coming years, and at the same time it’s a useful use of European means we get via our GMO-programmes. We prefer doing this in cooperation with our colleague cooperatives in Flanders, but perhaps we could also do this with cooperatives from outside of Flanders.”

“The year 2018 is a double year that evokes extreme commercial feelings no matter what. However, it was also a year in which we continued working on the strategy of our cooperative, and it was a year in which we finally saw greenhouses emerging in the horticultural region opposite the auction in Roeselare. The rooftop greenhouse of research station Inagro will also gradually start to take shape on top of REO Veiling’s container warehouse. It was an eventful year that shows that the cooperative sector can also face the challenges of tomorrow in difficult circumstances, and that’s what’s most important,” Paul concludes.