Local industry looking for traders to expand its US footprint

South Africa has a slim window to benefit from the European market before litchis from Madagascar arrive. The first litchis from Malelane are flown to Europe where France, in particular, through its long association with Indian Ocean islands, loves the fruit.

The price of litchis often plummets when Malagasy volumes arrive – and the first vessel from Madagascar is docking this week. Litchi growers can have a good run up to Christmas, with enquiries coming briskly. “A lot of people knock on our doors for litchis before Christmas,” says Bobby Price, chairperson of the South African Litchi Growers’ Association. 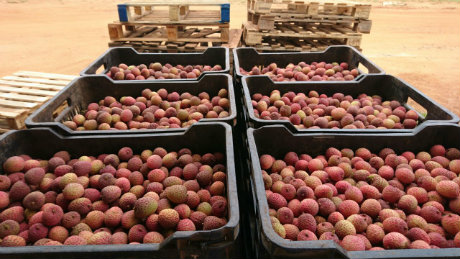 After Christmas, a lot like the open market on grapes, the litchi market is lacklustre, a phenomenon even more keenly felt by litchi traders because the litchi season is such a short one.

“You’ve got three weeks and if there are one or two mistakes, that’s it, and you can only fix them the next year,” he notes. “So far, so good, though. It’s a short and sharp season and you can’t predict how it’s going to turn out. We’ll have a better idea by January.”

There’s a general expectation in the industry that if there were more markets than just Europe, there’d be an expansion in plantings back home. Currently there’s a waiting list of up to two years for litchi trees (and then an orchard takes around a decade to break even).

Logistics around irradiation drive up costs in the USA
Of course, there is another market outside Europe for South African litchis, the United States, which took the local industry more than twenty years to open up, but after the first volumes were flown to Atlanta three years ago, it’s still an immature market.

Last season logistical costs in the US became untenable after cargo was broken up at OR Tambo airport in Johannesburg. This had the result that fragmented, small consignments of litchis had to be transported from Atlanta to the Gateway America irradiation facility in Mississippi. From there small consignments of the fruit were distributed across the United States and unit costs escalated, something the industry is very keen to avoid this season through keeping volumes together.

Various growers band together, each sending a limited volume, to spread risk and share the costs. The local industry attended the Florida PMA this year in an attempt to broaden its trading network in the US, but found that not many American companies deal with the fruit.

If a cold steri protocol for shipping litchis could be agreed upon between South Africa and the USDA, then litchis could be sent in much larger volumes and at lower cost, for they wouldn’t have to be trucked to an irradiation facility before distribution. South Africa has completed its research into the litchi moth which was, ironically for a phytosanitary pest, established with great difficulty at a location in the Eastern Cape, very far removed from Limpopo and Mpumalanga, the litchi production areas. It is hoped that the first litchi shipments to the US could take place next season.

Harvest slightly down because of hail
For the moment, the season is going well, with Malelane close to finishing up (hail made a bit of a dent in volumes) and Tzaneen and then Nelspruit taking up the baton.

The Mauritius harvest continues until roughly mid-January. Maclean is a later cultivar, but unfortunately it doesn’t ship well. “One of the reasons to increase the cultivars in the industry is to give us the legs to extend the season past mid-January, even into February,” he explains. “Coming in earlier, by the beginning of November, would also be ideal.”