Following a later start by at least a week, California's sweet potato harvest continues to be steady and growers are aiming to have product out of the ground by the end of October. Normally, harvest would start in mid-July but this year it kicked off at the beginning of August.

“This year, a lot of people planted late because of wet weather early in the season. We’re also going to have to wait with this heat wave here to see if there’s any impact,” says Dustin Robinson with Yagi Brothers Produce. “But for the most part what we’re pulling out of the fields right now is pretty consistent with the last couple of years with yields. The quality is looking really nice.”

There are changes within the industry this year. Robinson notes that some growers are tapering off on their acreage of white sweet potatoes and some are also embarking on growing sweet potato varietals. Varietals are seeing increased interest not only for their health benefits but also for their colorful plate appeal. Last year, Yagi Brothers introduced a new product, the Ben Yagi Purple sweet potato, an organic hybrid Japanese potato that is purple inside and out and has more cooking attributes than other purple varieties. (Other purple varieties are prone to drying out in the cooking process while the Ben Yagi has the cooking attributes of a traditional sweet potato.) 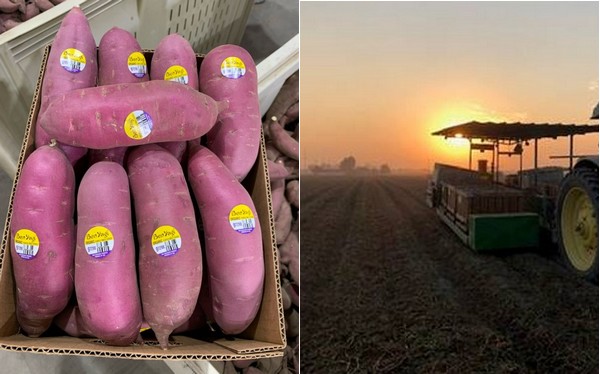 Last year, Yagi Brothers introduced the Ben Yagi Purple sweet potato, an organic hybrid Japanese potato that is purple inside and out and has more cooking attributes than other purple varieties.

The yield of specialty varieties
This year Yagi Brothers has increased its acreage on that varietal which is also necessary given the specialty varietals don’t yield as much as regular orange sweet potatoes for example.

To help move sweet potatoes, including the Ben Yagi, Yagi Brothers has some new partnerships, including one with Progressive Produce that is giving the grower-shipper some national distribution and international opportunities. Its other partners are Progressive West, Sun City Partner SE and Islands Race-West NE.

As for pricing, Robinson does note that the market in California started off lower than it typically does in a new crop year. “It’s hard to compare pricing to last year because there was such an abundance of potatoes last year that it wasn’t a normal market,” he says. “I think people are going to try and maintain their pricing. It’s been a tough couple of years.”