The banana production volumes have decreased somewhat due to some cooler temperatures in the tropics. Consequently, prices have risen. Nevertheless, the price level in Europe either remains stable or records only slight increases due to transport costs. European banana producers in the outermost regions are concerned about a possible oversupply if banana import tariffs are also reduced for Brazil and Mexico, as is already the case for Peru, Colombia and Ecuador. The European Commission has therefore made an agreement not to lower the tariffs further than € 75 per ton. 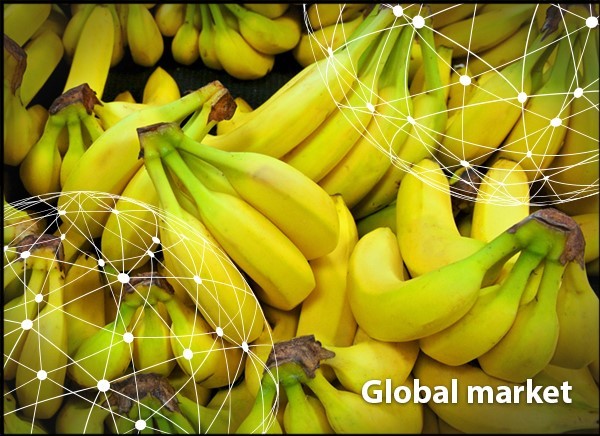 Ecuador: Higher prices due to lower temperatures in January
Year-round bananas from Ecuador are exported worldwide. 21% of the volume is intended for Russia, where Ecuadorian bananas have a market share of 96%. In addition, exports to Georgia and Ukraine have risen sharply in recent times. Banana prices have increased due to the colder weather recorded in the beginning of 2020. This has led to spot prices reaching up to € 9.45 per box in week 7. The production under contract, on the other hand, has been sold for € 5.75 per box. This situation is expected to continue for 10-15 weeks.

Mexico: China opens its doors to Mexican bananas
The Chinese market has opened its doors to bananas from Mexico. Many producers are expanding on this new market and the first shipment of bananas bound to China has already departed.

The Netherlands: Many delays in banana arrivals
The situation in the banana market is not too bad at the moment. Traditionally, the production is somewhat lower in the first quarter and prices somewhat higher. In addition, delays in the shipments in recent weeks have caused some constraints in the supply. Dutch importers also say that there is a rising demand for fair trade and organic bananas.

Since the signing of the Geneva agreement (2009) between the EU and some Latin American banana exporters, import tariffs for bananas have fallen from € 176 per ton to € 75 per ton. This now applies to Colombia, Peru and Ecuador. Mexico and Brazil are about to receive the same treatment as a result of the EU-Mercosur agreement and that between Mexico and the EU. This increases the chance of oversupply. To prevent this, and in order to ensure that the needs of European producers are met, the European Commission has agreed that under no circumstances will the rate of € 75 per ton be reduced any further.

Germany: Quiet market, difficult sales of organic bananas
The German banana market is quiet at the moment. The supply from the ripening centers has therefore been slightly reduced in recent weeks. After all, traders generally prefer to keep prices for the entire range of bananas at a high level. The general price level is slightly higher than around this time last year.

In various places, the prices of B and C brands were almost at the same level, so the sales of the B brands logically increased slightly. In addition, organic banana sales are currently not meeting expectations.

Within the retail, there is still further growth potential for bananas; certainly when it comes to organic and Fairtrade bananas. In addition, there is also room for new brands and concepts. The Hamburg-based import group Port International recently introduced climate-neutral bananas under the brand “BE Climate” and has already signed contracts with the Belgian retailer Delhaize.

Italy: Banana prices have slightly increased
Banana prices have slightly increased in Italy due to a rise in transportation costs. One operator says that prices have risen by € 0.05 per kilo. € 1.15 / kg are paid on the wholesale market for the premium quality bananas. The importer buys bananas in South America, but the processing, ripening and packaging are done in Italy. Consumption is growing and the only dip in this trend was observed in the two weeks of mid-August.

Sicily also has the Cavendish dwarf variety, for which the season runs between March and December. The prices in this niche market currently amount to around € 3.50 / kg. The bananas are partly organically grown and sold to people who are willing to pay a high price for an exclusive product. "We produce around 25 tons per season in Sicily because there are only a few companies able to work with this product," says a banana grower in Sicily. "We are expanding our acreage and hope to double the production in a few years."

South Africa: Higher prices for bananas
The situation of the banana market in South Africa has been good since the start of 2020. Prices have risen from 0.35 € / kg (6.90 ZAR) at the beginning of February to an average of 0.42 € / kg (8.17 ZAR). Heavy rainfall has recently had an impact on production volumes in Africa. Unusually high temperatures in the northeastern part of the country and in southern Mozambique have also taken their toll.

The production of Macadamia nuts has reduced the number of hectares devoted to banana plantations in South Africa. Without the imports from South Mozambique, the prices on the South African market would rise. In the coming months, volumes are expected to rise, but not to a level that one would consider overproduction. A market agent claims that growers are paying a lot of attention to quality. Most bananas are extra large in size.

United States: Volumes picking up in March
Banana stocks have been limited in recent months. US traders expect this situation to change in early March, around weeks 10 and 11, when the stocks will increase somewhat. The lower volumes are due to the colder weather in certain regions of Mexico. In fact, Colima has already had lower temperatures for 3 to 4 weeks. It is warmer in southern states such as Chiapas, which means that volumes there are up to the usual standard.

In addition to Mexico, Guatemala, Honduras and Costa Rica also supply bananas to the US market. Here too the volumes have decreased due to some cooler temperatures. Meanwhile, the demand for bananas in supermarkets has remained stable, especially given that other fruits are not yet in season and are therefore expensive. The price for bananas has been high in recent weeks and has peaked in the past two weeks. If the volumes pick up again, this should lead to more stable prices on the market. The holidays in the US have led to a drop in the demand for bananas from schools.