The Australian Marine Conservation Society (AMCS) is pleased the Australian Capital Territory government is taking the next steps on banning marine wildlife-killing single-use plastic with its announcement of the latest items that will be banned from 1 July.

But the nation’s top ocean conservationists have expressed alarm that the ACT government has broken its commitment to ban plastic fruit and vegetable produce bags this year.

AMCS plastics expert Shane Cucow said when the ACT introduced its plastics laws in 2020, the government had committed to act on the wasteful plastic produce bags next.

“Overwhelmingly, the public supported a ban on these items, as evidenced in the results of government consultations, so we are disappointed to see them renege on this commitment,” said Mr. Cucow. 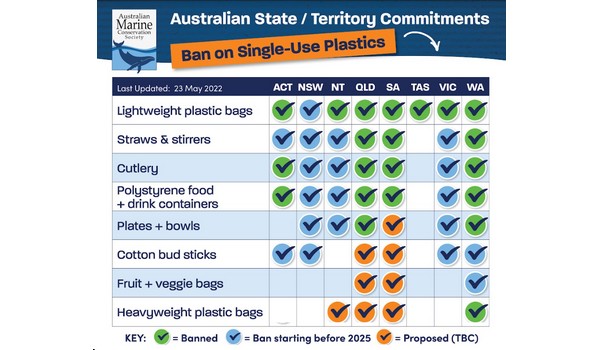 “Soft plastic bags are among the most dangerous plastics for seabirds, turtles, and marine mammals, causing life-threatening blockages or internal injuries when eaten. While we are pleased to see the ACT phasing out plastic straws, cotton bud sticks, and oxo-degradable plastics in this latest ban, we urge the ACT government to listen to the community who have overwhelmingly called for greater ambition.”

“Sadly, by choosing not to ban these plastic killers, the ACT is now one of the least ambitious jurisdictions in the fight against ocean plastic pollution, falling behind states such as Western Australia, New South Wales, and Queensland, who have all banned items like plastic plates and bowls.”

Despite the step backwards, Mr. Cucow said it was promising that the latest ban included oxo-degradable plastics, describing the plastic as a “textbook case of greenwashing.” While described as biodegradable, oxo-degradable plastics have chemicals added to make them fragment more quickly, but they persist as microplastics in the environment.

“There are plenty of genuinely compostable alternatives widely available, but with greenwashing rife, it’s hard for people to know which items to choose. It’s time to put our wildlife first and crack down on false solutions.”