A cold and dark start to the year in many countries has been detrimental to bell pepper production. In the Netherlands and Belgium, the high price of energy has meant many growers have chosen not to combat this cool spell, delaying their harvest by a few weeks. In Spain, the lower temperatures in November mean a dip in production is predicted for next month, while in Israel the outlook is more positive despite a delay, as the production will likely bounce back as temperatures rise. 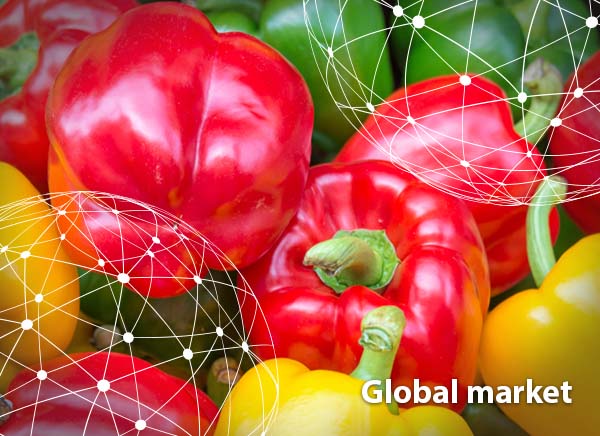 The Netherlands & Belgium: Dark weather and energy crisis delay bell pepper harvest
Production in the Netherlands and Belgium has slowed down, both because of delayed planting and low-growth weather.  The energy crisis, resulting in high gas and electricity prices, is the cause of this. In addition, January threatens to be a historically dark month. This also puts a brake on cultivation. Growers therefore report a delayed harvest of several weeks. The expectation is therefore that sweet pepper will be in short supply this spring.

March is traditionally a difficult month when it comes to pepper availability, but due to these conditions, it could be even worse this year. The market will be keeping a close eye on Spain. Imports from the south start to drop at the end of February, as the quality often does. Notes next to sparsely stocked shelves in supermarkets with a message about quality problems are an annual phenomenon.

So far, the quality of the supply from Spain has been good, thanks to a stable cold, but mainly dry winter. The lack of rain has prevented quality problems. However, it is not only the declining quality and supply from Spain that make it a tense season this year.

Germany: High prices for Spanish produce on German market
Spanish bell peppers have dominated the market, while Turkish and Moroccan produce complemented the supply. The demand could be met without any problems thanks to increased availability. The quotations tended upwards, partly as a result of high levels of purchases, but also as a result of improved accommodation possibilities. Overall, prices are a bit higher than last year.

Just after New Year, some Spanish producers have stopped cutting yellow peppers due to the low prices for this variety. As a result the produce has lost quality and storability. Meanwhile, importers are speaking of normal supplies regarding the current demand.

Spain: Lower production due to lower temperatures, shortage of red and green peppers expected
The bell pepper season is underway in Almeria with a somewhat quiet demand, which is normal for this time of the year; however, volumes could drop more than usual from February onwards. Some growers are already uprooting green bell peppers in order to plant the watermelons that will be harvested in April.

"Pepper volumes in Almeria are more or less normal for this time of the year, although in general, yields so far this season have been lower," says a grower and exporter based in El Ejido, one of the most important bell pepper production areas in Almeria. “We are talking about an average of about 1.5 kilos less per square meter compared to the previous season, despite the acreage having been expanded this year, although prices have also been somewhat better," he says. The campaign's peak production period, which takes place between November and the end of January, is now coming to an end, although he predicts that production will drop more than usual in February, due to the lower temperatures in November. In fact, this is already happening with the yellow and orange bell peppers, whose ripening is always ahead of the red ones. In the last few days there has been a lack of production and prices have been rising (in the last 3 days, the price in the auctions has risen by almost 50 cents), especially for the G sizes, which are usually packed in flowpack in the tricolor format.

The prices of short red and green bell peppers remain similar, although at the moment there is a greater supply of green bell peppers, in part, due to more being harvested to be able to start planting spring crops, such as watermelon. In about 2 to 3 weeks there will likely be a shortage of red and green bell peppers, just as it's currently happening with the yellow and orange. Also the prices of specialty peppers, such as the Sweet Palermo, are currently lower than usual, although they are expected to go up starting in February. “We will finish the season around April with a small supply," says the grower.

Italy: Italian retailers search for continuity
In Italy, during different periods of the year, there are red and yellow peppers from Spain in large-scale distribution more so than Italian ones. Large-scale distribution prefers Spanish peppers as Dutch ones are too expensive, while Italian red and yellow ones are too often not uniform enough in color and size. A large-scale retail trade buyer affirms that there is a need for continuity regarding daily volumes, which unfortunately Italian productions are unable to guarantee except at this time of year, so the choice necessarily falls on the Spanish foreign product, which often has prices lower than the Italian one. So, the price issue, combined with the quality of the product, causes consumers to choose them. From an Italian stand point, this gap must be bridged.

A wholesaler from Calabria says: "We are currently offering yellow, red and green peppers of Italian origin. During the week there has been a sharp increase in prices: we are around 1.80-2.00 euro at producer cost. In general, there is a strong demand for the product."

In the province of Caserta, the greenhouse pepper campaign should start in June. An operator who has been marketing peppers in large quantities for more than 30 years says: "Last season was not favourable, consumption was reduced and, as a result, prices were very low. The outlook for the next season is not good. With the general increase in production costs, energy, gas, etc, many growers are fed up with planting a product that offers no remuneration. So we are uncertain about the volumes we will have available."

In Campania there is currently no production of peppers. Transplants will begin in February in the north of Caserta, a traditional production area for peppers. Regarding this campaign, it is foreseen an increase in production of about 10%. At the moment, the product is arriving from Sicily.

According to statistics, peppers were purchased in the last year ending in November 2021 by over 16.3 million Italian families, equal to 62.8% of the total.

The frequency of purchase is excellent, at over 7 purchases per year on average, constantly increasing in recent years. The average expenditure per families is also interesting and amounts to over 15 euros per year.

Israel: Israeli bell pepper market hampered by logistic problems, despite high yield
The bell pepper market this year is challenging in Israel, as always, but there seems to be a good quality season with nice volumes. Israel is experiencing some logistic problems, like delays of vessels, low availability of air space due to covid, and price increases as well as very low currency exchange rates for Israeli growers who export. Israeli peppers are exported mainly to Russia these days, as well as some smaller quantities that are exported to the UK, eastern Europe, and earlier in the season to the US and Canada. The yield seems to be high this season. These last few weeks have been extremely cold in the Arava region, which slows down the process and thus quantities are now very low, as there are not many peppers ready to be picked. Within a few weeks this should pick up again and the export of large quantities is expected up until the end of the season, which is usually the end of April.

January is generally when pepper production ramps up. “Things look good in January this year and usually when you have a strong January, that allows for a stronger February and March as well,” says the grower-shipper.

The volumes look similar to last year for bell peppers and the grower-shipper sees slightly more volume in mini peppers.

Meanwhile while demand is good for peppers--though foodservice demand has been down compared to recent years--freight rates are challenging. “Especially going to the East Coast. The rates have been through the roof pretty much since November. It’s probably up 30-40 percent,” says the grower-shipper.

Looking ahead, the recent steady volumes will stay consistent until May when the grower-shipper transitions to central Mexico and Baja. “I think right now everybody came into a bit of a flush in supplies in January,” he says. “Last year peppers were super tight in January because we had that delayed start of the season on all commodities. This year we started on time and our flush is happening right now. Going into February we’ll see a natural dip in production. We’ll still have promotable volume but the pepper market should start increasing in the first and second weeks of February.”

Meanwhile in Florida, pepper production is a little bit lower than it has been in past years. Part of that is driven by the attrition of farm land but it’s also being driven by competition from Mexican growers,” says one shipper.

At the same time, costs are also up on production. “Growing costs for production for a box of green pepper in Florida is around $12 to break even. That’s driving people to plant a little less to reduce the amount of product available which drives the price point up,” he says.

Along with Florida and Mexican production, peppers are also coming from Honduras, El Salvador and the Dominican Republic. Canadian production will begin mid-March.