This season a common theme in the global tomato market is increasing pressure from viruses such as the ToBRV, as well as continued abnormal weather patterns and rising production costs. The increased cost of energy in most countries is of particular concern as the northern hemisphere switches to lit cultivation during the darker winter months. All these factors combined mean higher tomato prices across the board. 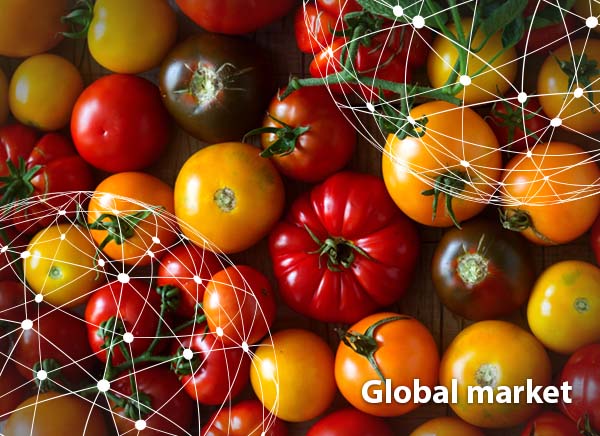 The Netherlands and Belgium: Energy crisis and virus issues put pressure on tomato growers
In the Dutch and Belgian tomato greenhouses, the lights have been on for a while now. It is time for the lit crops, after an exceptional season so far with remarkably high prices since the summer. At the moment, however, it is the high energy prices that are the most striking factor.

The season for the unlit crops is over, except for a small group of autumn growers with mainly large truss tomatoes. They go into production around this time for a short period. Most growers without lights are now in their crop rotation and preparing for a new season. Certainly for growers who plant a new unlit crop in December, there will be shifts due to the energy crisis. It is expected that next spring there will be peaks and troughs in production at different times.

This was already the case this year, mainly due to virus problems. This caused 'winter prices' in the summer when growers were forced to clear their greenhouses after being infected with the Tomato brown rugose fruit virus (ToBRFV), both in the Netherlands and in Belgium. The latest updates of the official figures show 29 infections in the Netherlands and 12 in Belgium. As a result of virus problems, growers are orienting on new crops. There are also growers who are switching to cucumber or sweet pepper, for example.

After a summer with high prices, an autumn followed in which the prices remained at a high level and even appeared to be able to continue to rise, contrary to the trends of recent years. In recent weeks, the upward price trend has stabilised for a while. November often sees a small dip, when imported products become available in large quantities. Nevertheless, this week the prices of truss tomatoes, the largest segment among the exposed growers, are once again on the rise. The prices for loose tomatoes have on average been slightly lower than those for vine tomatoes in recent weeks.

This winter, some growers in the Netherlands and Belgium are choosing to skip their lit crops due to high energy prices. Growers with unfavourable energy contracts who currently have to buy gas and electricity at high prices have decided to leave their greenhouses empty this winter. There are also growers who have adjusted their lighting strategy, or their cultivation strategy in such a way that they can temporarily do with less energy. As a result, the plants are growing slower at the moment, but growers hope to be able to add gas, literally and figuratively, as soon as energy prices drop again. At the moment, a fall is not yet in sight.

Germany: Low temperatures cause drop in demand for tomatoes
Due to the low temperatures in Germany, demand has fallen significantly. Nevertheless, the supply in terms of volume and varieties is as high as ever, so that demand could be easily met. The Dutch supply decreased noticeably, while the supply from Spain increased.

The Spaniards have also noticed the rising gas prices in the Netherlands and are adjusting their market prices accordingly. As a result, the price for the early Spanish tomatoes is notably higher for certain varieties than for the latest Dutch tomatoes. The remaining supply comes mainly from Morocco, Belgium and Italy.

Italy: Rising production costs and ToBRV pressure hamper Italian tomato producers
According to data, in the last year ending in September 2021 over 23.2 million Italian families (89% of the total) purchased from the tomato category at least once. Italians buy tomatoes on average 17.2 times a year, for an average cost of 2.10 euros.

For the producers, the 2021 season was a difficult one. In the summer, tomatoes suffered from high temperatures and diseases such as the Tomato Brown Rugose Fruit Virus. The heat halved the yields, while the costs have risen. The average price of cherry tomatoes (1.50 euros / kg) only partially paid off the costs. Even now, in the autumn, demand from foreign markets, such as Germany and Austria, has weakened, due to the resumption of the pandemic. Given the uncertainty, it is likely that some producers will decide in the future to reduce the hectares planted with tomatoes.

Spain: Decline in production area of Spanish tomatoes due to pressure from multiple sides
The month of November began with an increase in the prices of all the types of tomatoes, with the exception of the vine tomato. The vine tomato, together with the smooth tomato, are the commercial types with the highest price in the auctions of Almeria. Tomatoes continue to lose ground in the whole Andalusian horticultural area. According to initial estimates for the season, it will reduce its surface by 3% compared to last season, when it was close to 8,400 hectares. Its high production costs, especially labour, strong international competition, mainly from Morocco, as well as problems caused by viruses and Tuta absoluta, together with prices that fail to meet the expectations of producers, are leading to their progressive substitution by crops with a lower salary impact such as peppers and zucchini.

According to different sources in the sector, the types of tomato that will reduce their cultivation surface the most this season will be the round tomato and the vine tomato. The pear tomato maintains a number of hectares of cultivation similar to last season. On the other hand, the specialties with the highest added value and profitability, such as rose-type tomatoes, beef, cherries of different colours, etc., show greater strength to compete with productions from third countries, and show an increase in their growing area. In the month of November, Andalusian production, still limited, overlaps in international markets with the end of the Central European season which, despite offering lower quality product, puts pressure on Spanish tomato prices. Moroccan production is increasing notably in mid-November, competing with greater intensity with the supply from Almería, Granada and Murcia in the European markets.

South Africa: Heavy rains affect South African tomato harvest
Tomato prices have significantly fallen due to high volumes on the market over the past month. The average price on the market decreased by 42% to R4.47 (0.25 euro) / kg due to an increase in supply, but a turning point is expected because rain is hampering harvesting in the northern region.

Tomato producers in the northern parts of the country (Limpopo, Mpumalanga, Northwest Province where tomatoes are grown) are on tenterhooks: there has been widespread, substantial rain since the weekend. If the summer has above average rainfall, as is predicted, it would have a direct effect on pest pressure and yields (as happened last year) and lower volumes.

A tomato trader reports that there are some producers who lost much of their yield to pest damage last year (for instance the newish arrival Tuta absoluta) and if the same happens this year (and Tuta absoluta pressure is already very high) they could cease tomato production, at least for the foreseeable future.

China: Poor weather and increased production costs drive up Chinese tomato prices
From the summer onwards, Chinese tomato prices have remained high. Some time ago, Shandong, Hebei, Shaanxi, Shanxi, Henan and other places encountered continuous rainfall for many days, causing the fruit setting rate of tomatoes to be lower than usual, and the volume of tomatoes on the market to be significantly less than in normal years. Since the beginning of this year, the prices of seeds, fertilizers, pesticides, etc. have increased, driving up the production cost, rising oil prices have driven up transportation costs, which also inflated vegetable prices. At present, the wholesale price of ordinary tomatoes remains high, the price is about 6 yuan/500 gram.

In recent years, the demand for high-end cherry tomatoes in China's first-tier cities has surged. Taking Shanghai as an example, due to the limited planting area in the urban area, the current cherry tomato supply is less than 1/5 of the total consumption. Therefore, some companies have begun to build greenhouses in urban areas within the city, to reduce transport costs and ensure the local supply of cherry tomatoes.

North America: Consistent supply and better prices for NA tomatoes
For one U.S.-based grower with hydroponic operations in Mexico, grape tomatoes seem to be taking the lead in growth in the category, and the grower is looking to expand production on grape tomatoes. The grower also grows beefsteak tomatoes and tomatoes on the vine (TOVs).

“Supplies of beefsteak and TOVs are similar to last year at this time--there’ve been some ups and downs and following the pandemic. Our numbers aren’t always following the trend we’re used to. But overall it’s nothing unexpected and we’re able to supply tomatoes,” he says.

Canada is also in production with greenhouse tomatoes at this time. Meanwhile demand for tomatoes is consistent. “We’ve seen good demand and we’re pushing a lot more tomatoes with the winter and holiday season coming up,” he says. “Overall, if anything, demand is slowing increasing on tomatoes with grape tomatoes especially. There’s a big market for grape tomatoes.”

While grape tomatoes have helped grow the category, particularly as a snack choice, the grower says that pre-packaged salads and salad kits are also a growing option for grape tomatoes. “They’re increasing in popularity and we’re finding a lot of clients are looking for product that can sit in their kits,” he says.

As for pricing on tomatoes, it’s fairly comparable to last year at this time.

Meanwhile Florida has begun its field tomato production and the season is on time unlike some other commodities in production at this time such as specialty peppers, which are delayed. “The quality is excellent. We had quite a bit of rain this fall early and some of these later passing fronts have helped the crop,” says one Florida grower who is in production with vine-ripened round tomatoes and Roma tomatoes, a new item for them. “The quality is looking really nice on the tomatoes. You can irrigate but it’s never the same as a nice rainfall. It’s balanced everything out and now the weather is cooling down so that’s helped us as well.”

While acreage has stayed the same, the grower has increased the overall footprint on both types of tomatoes.

As for demand, it’s good right now. “Everything is moving. Demand hasn’t been exceptional but it’s been good,” he says. Florida growers also are keeping an eye on increased freight rates which may make Florida product a more attractive option to nearby regions.

As for pricing, it’s started off in the mid-range to slightly higher currently and the grower says it’s better than last year’s pricing at this time.