"If anything, we are seeing a large proportion of bigger cabbages"

In Germany's cabbage stronghold - Dithmarschen - cabbages have been diligently cut for several weeks. Despite the bad omens, such as wet and cold spring, the annual harvest in the northern vegetable growing region is now developing according to plan. "The week before last, there was a harvest break due to the precipitation, because the ground was simply impassable. In the meantime, it is nevertheless going reasonably well again," says Dirk Johannßen, cabbage producer and co-founder of the marketing platform Kohl Direkt, which was established in January 2021.

"Compared to other years, we planted our fields about three weeks later," says Johannßen, looking back. "What was surprising was that the cabbages still grew well. If anything, we are seeing a large proportion of bigger cabbages. This is again related to the weather, because this year -unlike in other years- we were spared a prolonged heat wave." 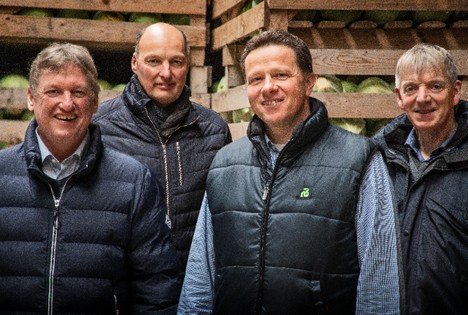 All in all, the cabbage producer expects a pleasing and above-average overall yield. "From August onwards, the old stocks in the local cold stores began to run low. Then there was the first regional early cabbage, which is traditionally cut in the field and prepared for the trade. So, on the whole, we can look back on a seamless seasonal transition," Johannßen continues. 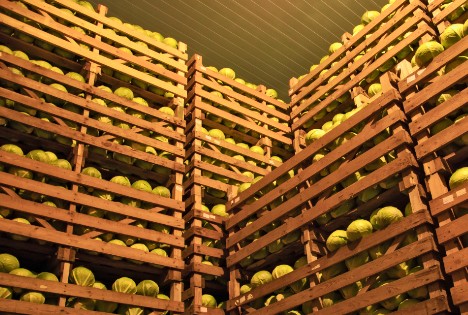 The well-stocked cold stores at Hagge.

Hope in the export business
In the meantime, the first stocks have already been put into storage, so the starting signal for the traditional storage season has now been given. "In view of the abundant supply situation on the domestic market, we have to expect low prices for the time being," says Johannßen, adding: "Exports to Eastern Europe, such as Poland, the Czech Republic, Hungary and the Baltic States, are particularly interesting for us in the second half of the season. From April onwards, the domestic supply tightens there because only limited cooling capacity is available, which is why supplementary imported goods are often in demand at this time of year. There we already see options for our stock. The cabbage market is always quite opaque and therefore things always turn out unexpectedly." 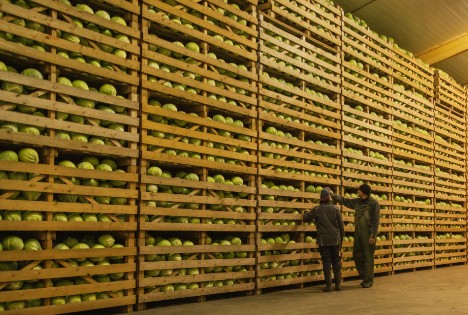 The annual storage phase in the Dithmarschen region is nearing its end.

Lively interest on the trade and producer side
Kohl Direkt came into being just under a year ago and is an initiative of four farms in Dithmarschen. The aim behind the online marketing platform was to offer first-class red and white cabbage to resellers and bulk buyers from Germany and abroad directly or without any intermediary trade. "The aim is to be able to build a bridge between our producers and the market, predominantly the wholesale trade. There are also interested parties on the producer side who would like to join our group: But we are rather cautious about that, especially since the advantage of our merger is precisely that we can react flexibly to market developments," Johannßen concludes.