The stone fruit campaign has kicked off in the Region of Murcia with some delay compared to the previous season due to the weather recorded in recent weeks. This factor will determine this year's European production, as was already the case in 2020, when adverse weather conditions significantly reduced the harvest volume in the main EU producing countries.

"We have already started with small quantities of peaches and nectarines in the coastal area of Murcia, but the weather is not ideal," says Joaquín Gómez, president of the Association of Producers and Exporters of Table Grapes and other Agricultural Products (Apoexpa). "We've had a week with practically no sun, and that is something fundamental for the fruit during its last days on the tree. This has caused a delay of about 8 or 9 days compared to last year." 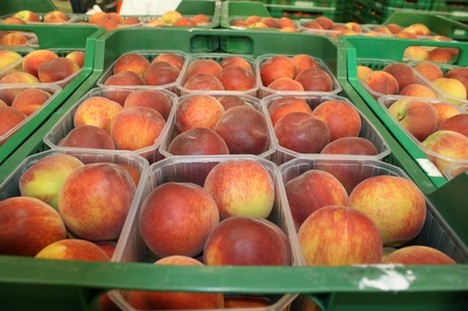 In the short term, the weather in the region is expected to remain unstable; however, despite this setback, Joaquín believes that the season is starting with very good prospects, driven by the drop in the production of other regions. "Right now there is moderate optimism regarding prices, although everything suggests that they could be good this year, especially during the first part of the campaign," says the president of Apoexpa.

In any case, the impact of the weather in stone fruit productions has been much more severe in other areas, both Spanish (the March frosts took a toll on more than 12,000 hectares, with great losses in Lleida and Huesca, according to data provided by Agroseguro) and European, where trees in the flowering stage or with the first fruits already set have been hit by unusually low temperatures. In fact, losses are expected to be severe in Italy, with significant damages across the country, or in France, where the Government has even declared a state of agricultural calamity and created an emergency fund of 1 billion Euro for producers affected by what has been described as "the greatest agricultural catastrophe of the century."

However, as Joaquín points out, "Murcia has not been highly affected by the frosts, and neither has Andalusia. Apricots are the most lacking here, although for more agronomic reasons," he says.

The Region of Murcia has some 25,000-27,000 hectares cultivated with stone fruit trees. It is able to export 60,000 tons of nectarines, 30,000 tons of peaches, 40,000 tons of apricots and 70,000 tons of flat peaches to various international markets. Flat peaches will reach the markets between May 10 and 15 and their expansion in Murcia has happened at the expense of other stone fruits, such as peaches, he says.

The list of destinations for the Region's fruit includes important overseas markets, such as China, which received the first shipments of Murcian stone fruit in 2016.

"We have been working on opening new destinations for the stone fruit, but it is hard, and more so since the pandemic started, as maritime shipments have slowed down. If a 30-day trip lasts 40 days instead, it's a problem. Maybe we don't notice it with grapes, as they withstand long journeys very well, but things are different with stone fruit," says Joaquín. "For now, we are very much focused on Europe, which is the market that our promotional campaign will be mostly targeting."

Promotional campaign: Stone fruit is not only for summer, but also for spring
This year, Apoexpa will carry out a campaign to promote Murcian stone fruit, which is reaching the market in this first part of the season, and boost its sales in Europe. "The campaign is going to start next week in social media with promotional videos and will address all importers and all professionals involved in the stone fruit business in Europe, who will receive a surprise gift," says Joaquín Gómez. "The fundamental idea we want to convey is that stone fruit is not only for the summer, but also for spring, and that fruit from the Region of Murcia is available for all markets from mid-April to mid/late June."