The raspberry market has gone through some difficult weeks. Prices had reached high levels, but after Easter they dropped due to increasing volumes. In the meantime, the first Dutch and Belgian raspberries have hit the market. The situation has also been difficult for blackberries due to substantial shortages affecting the Spanish production, which have had to be covered by Mexican fruit. The supply from Central Mexico has gone smoothly. The Dutch redcurrant season is now finished. It has been a good campaign with a smooth-running supply chain. The redcurrants that are currently on the market come from Chile, but due to their declining quality, that season will soon come to an end. 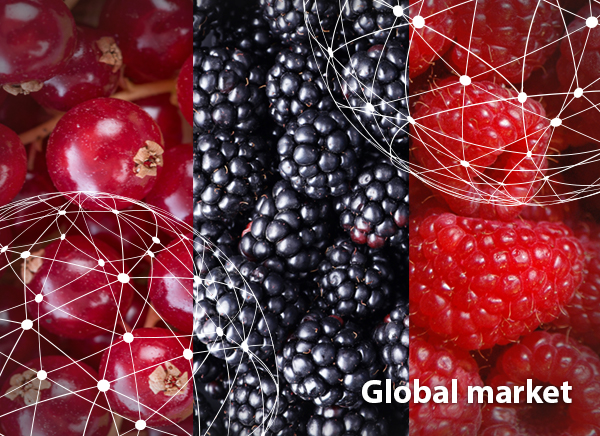 Netherlands: Declining raspberry market and shortage in blackberries
"We've had some very difficult weeks in the raspberry market, and we see greater volumes coming from the week after Easter," says a Dutch soft fruit trader. "Until Easter, prices were very high, but after that the volume increased and the price dropped. Qualitatively, the raspberries from Morocco and Portugal are better than Spain's."

"Furthermore, we see a big shortage of blackberries. The Spanish production has fallen, so the supply has been complemented with Mexican blackberries. The fruit's prices are very stable," said the trader. "The Dutch redcurrant growers have had a decent season, with volumes eventually declining smoothly. The quality of the Chilean berries currently on the market is starting to decline, bringing a long season to an end."

The popularity of blackberries has also increased significantly in recent years. Recent figures from research firm GFK show that blackberry consumption in Belgium has increased by 59% over the past 5 years.

Germany: Moderate demand at high prices
In Germany, the soft fruit market is in a stalemate, reports one importer. In the run-up to Easter, the demand for raspberries and blackberries was on the rise, but over the past week it has fallen back significantly. "People have little appetite for soft fruit in this cold weather," says one. The bulk of the soft fruit currently comes from Spain, Portugal and Morocco, and the last remaining batches from Chile are also now in circulation. "The supply is more than decent, particularly in the case of raspberries. The prices are on the high side across the board. Normally, prices start falling immediately after Easter, but this year we are still waiting for that to happen," he says.

Italy: Blackberry prices at high level
Despite the winter temperatures, Italians are consuming blackberries, raspberries and redcurrants. A trader from northern Italy informs us that the redcurrants currently come mostly from Chile, with some from the Netherlands, as well. The average wholesale price for redcurrants stands at around €19-20 per kilo. For blackberries, the demand is currently higher than the supply, so prices are at a high level; around €20 per kilo. Blackberries are currently coming from Mexico. As for raspberries, the supply is currently coming in from Morocco, Spain and Portugal. The price amounts to around €15 per kilo.

A Sicilian grower says that the Sicilian season has had a good start in terms of both quality and quantity. "Sales are also going well. In our latitudes it is possible to grow soft fruit almost all year round." In southern Italy, the raspberry season will kick off in early May, and the first blackberries are expected in mid-May. Germany, Switzerland, Austria and Eastern Europe are important destinations for Italian berries.

Spain: 25% fewer raspberries
Raspberries suffered the impact of bad weather in the first few months of the year. So far, yields in Spain have been down by about 25%. Despite this, prices have remained acceptable and without major fluctuations, as the demand has remained stable. Last week, the average price paid to raspberry growers was €5.81 per kilo.

Poland: Raspberry export volume down due to labor shortage, increased competition and falling prices
In Poland, fresh raspberries and blackberries recorded the greatest increase in sales in the first nine months of 2020. Berry exports grew by 42% compared to 2019, reaching $23.4 million; however, the growth in export revenue was mainly driven by the increase in raspberry export prices in 2020, while exports themselves grew by only 14%. Poland used to export significantly more fresh raspberries, but in recent years, labor shortages, increased competition, and falling prices in the global raspberry market have reduced its export volume. It is too early to say what the volumes will be like in the new season; however, the cold weather may have damaged some of the fruit.

United States: Tight blackberry supply
The United States is experiencing a shortage in the blackberry market. According to a California-based trader, the harvest has been slowed down by the cool weather. "A larger volume is expected, but it will arrive with a delay of up to 2 weeks." An Illinois trader says that the switch to different varieties is also taking a toll on the blackberry supply. "The yields of Tupy blackberries have been lower for a few years, so the acreage has been reduced. In some areas, Tupy cultivation has finished early. Some other varieties are also not producing as well as they should." Besides the Mexican ones, there are also blackberries from Guatemala available.

The raspberry supply from central Mexico is running well. "Many thought prices would drop as volumes increased, but the demand is excellent," says one trader. Besides Mexico, there are some crops in Oxnard, CA, but they are not yet fully established. Raspberry prices remain very stable at around $20. More volumes are coming, but the price is expected to stay at around $20. However, the price of raspberries may drop depending on what Central Mexico and Southern California are able to supply. The peak in the supply is expected to be reached this week, but delays could change that.

As for redcurrants, Chile ships them to North America in January-February. Then there are not many redcurrants on the market between February and June. It is a seasonal product and there is some from the northwest of the country available in the summer.

Australia: Raspberries have grown substantially in recent years
According to Berries Australia, the Rubus category (raspberries, blackberries and other berries) is, without a doubt, the one growing the most in Australia, even though it remains the smallest category, compared to strawberries and blueberries. The organization's Executive Officer says: "Raspberries have achieved phenomenal growth. The value has more than doubled over the past three years. Blackberries are newcomers to the market, with exponential growth in recent years, although we should recall that they started very small."

According to the Horticulture Statistics Handbook, the value of the berry category increased by 11% from June 2020, reaching $1.04 billion. Raspberries, blackberries and other berries grew by four percent in terms of value, to $216 million, while volumes also increased by five percent, to 9,932 tons. Only a very small amount (13 tons) is exported. Broken down by berry types, raspberries account for 75% of the production, blackberries for 25% and other berries for less than 1%, with the supply peaking during the summer months.