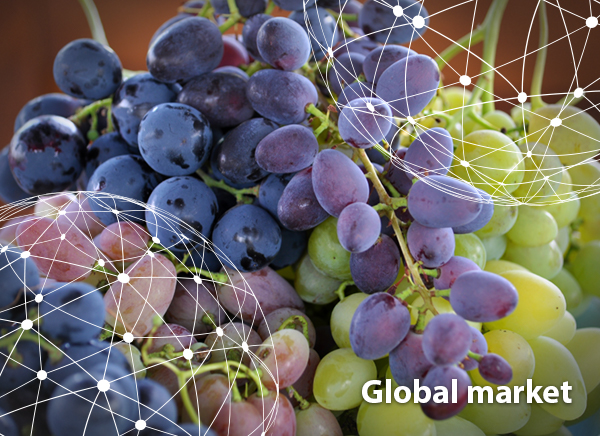 The Netherlands: Grape market is under pressure due to large supply in a short period of time.
The large supply of grapes on the European market at the moment is making their sales difficult. "South Africa shipped large volumes of white seedless grapes quite late. Normally, late varieties such as the Regal and Sundance arrive in February, but this time they arrived in March. Also, South Africa has planted a lot of new varieties, such as the Sweet Globe and Autumn Crisp, which also arrive later," says a Dutch importer. "Besides, India is also supplying large volumes, although cumulatively, those shipped to Europe are slightly smaller than last year's. The key thing to note is that the supply will peak in a few weeks' time, which will put additional pressure on the market. Therefore, we will all have to do our best this month and the next."

"The prices of punnets (10x500 grams) are under pressure, especially those of seedless white grapes. Also, a lot of seedless blue grapes are arriving and their prices are also under pressure. The arrival of red seedless grapes has slowed down a bit, so their prices are recovering. Red Globe prices have been under considerable pressure, but that market seems to be recovering a bit," says the importer. "Right now, it seems clear that supermarket programs are not going to stop, but there are quite a few difficulties selling in the open market. The wholesale markets are not really at a standstill, but because of the health crisis they no longer have the capacity to sell the volumes they used to."

Australia: Shortage of pickers and difficult market conditions
Australia is currently in the second half of the grape season, and labor shortages continue to hamper the industry. However, the Australian Table Grape Association, which brings the sector together, remains hopeful that growers will soon begin to feel the effects of the government measures implemented to counter the shortage. A second flight carrying seasonal workers from the Oceanic islands arrived in Tasmania this week.

It appears that several large growers have been unable to market some of their crops due to a shortage of pickers and the difficult market conditions. Although the borders will reopen in October, these events will have an impact on the coming seasons. In any case, the quality of Australian grapes remains high.

North America: Rains affect the price and supply
For North America, the supply from Chile has become even more important, as export volumes have shifted significantly to other destinations. At the same time, the quality and supply of Chilean white grapes have suffered considerably due to the rainfall recorded at the beginning of the year. Red grapes have not been affected to the same extent. Current market conditions are resulting in considerable price differences between white and red grapes. "Due to their scarcity, white grapes are marketed at extremely high prices. Red grapes, on the other hand, are being sold at very low prices."

The Peruvian volumes are declining sharply across the board, while South Africa is gaining ground, partly also because of the situation in Chile. Mexico is also in the market with some small volumes of Cotton Candy. Export volumes are expected to increase towards the end of April or early May.

Latin America: Mexican season starts early
Chilean exporters are trying to get foreign retailers to organize promotional campaigns in order to deal with the oversupply of red grapes. In Mexico, the Jalisco growing region is now on the market. Thanks to the crops in this relatively new region, the Mexican season now starts 1 to 1.5 months earlier than it used to; however, the sales peak will be reached in mid-May, as usual.

Germany: South Africa dominates the market
South African varieties - particularly the Crimson, Flame and Thompson Seedless, dominate the market, with the Ben Hannah, Prime Seedless, Barlinka and La Rochelle rounding out the wholesale supply. The Peruvian supply is quickly diminishing and will soon be gone from the market altogether. Meanwhile, the Thompson Seedless and Sugraone from India are gaining ground. The Chilean Flame Seedless and Sugraone are attracting eager buyers, especially because of their thick sizes. Prices are stable across the board, but clearly lower than around this time last year.

Italy: Still too early for Italian grapes
Wholesale markets in northern Italy currently offer white Waltham/Cros and Prime grapes, black Dan Ben Hannah and Rosata from South Africa. Prices typically range between €2.10 and €3.10, depending on the variety. There are also black grapes and Red Globe from Peru, which cost between €2.10 and €2.60, depending on the variety. The Peruvian Red Globe has actually seen its price drop since mid-March (from €3.30 to €2.60). At the Rome wholesale market, the white Thompson from South Africa and Timpson from Peru are available at a price of €2.70, which is higher than two weeks ago. There is also Peruvian Red Globe at a price of €2.50.

It is still early for Italian grapes. The first batches of Victoria and Black Magic grapes from Sicily will be harvested in the last ten days of May. Thanks to the earliness of some areas, the seedless grapes from the Gulf of Gela play with the advantage of not having any competition in the northern hemisphere for 20 days. The Sicilian season is preceded only by that of Egypt, whose seedless grape campaign ends in late May or early June. Only later do the Apulian grapes arrive.

South Africa: Record harvests in different regions
The grape season started late, but it has been catching up and the lower limit of the harvest estimate (67 million 4.5 kg boxes) has already been reached, with about three weeks of packing time left in the Berg and Hex River regions. "The rain two weeks ago in Hex River had a minimal impact," said the grape growers association. "Partly because what's left to be harvested is mainly Crimson."

Several regions had record harvests. By the end of week 10, 32 million 4.5 kg cartons had been exported to the EU (more than last year), about 13 million to the UK, 3.5 million to Canada, 2.7 million to the Middle East and 2.8 million to Southeast Asia. Grape exports to the US have increased to fill the gap left by Chile.

There is a lot of pressure on the shipping routes to the Middle and the Far East and this is taking a toll on the transport of grapes for special markets (China, Vietnam, India, Israel). Also, the cold storage facilities are sometimes overloaded and have limited the amount of grapes that growers can deliver (a limit being imposed had never happened before).