"We got the sweet corn season to start two months earlier by growing it in greenhouses."

Greenhouse cultivation is making it possible to extend the sweet corn campaign in Spain. This is a vegetable with certain light and temperature requirements that seasonally limited the start of its production to the summer, but thanks to the conditions provided by protected plots, it has become possible to start several months earlier and supply the markets for a longer period of time.

Diego Martínez, Agromediterránea's crop planning manager, says that "both the sweet corn production and consumption are constantly growing. In fact, this year, the acreage is expected to increase for the third consecutive year worldwide, and a record commercial volume is expected to be reached. The demand for sweet corn continues to outstrip the supply and, therefore it reaches reasonable prices." 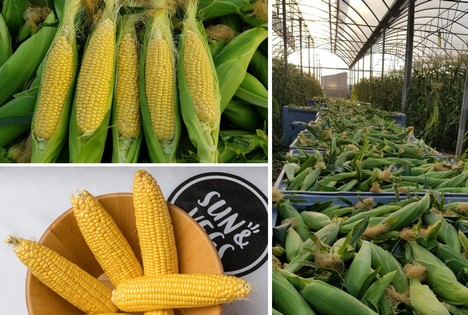 "In the past, we could only start producing sweet corn from July onwards, and we have managed to extend the campaign by two months by starting in May," says Diego Martinez. "We start with the greenhouse cultivation in Campo de Cartagena, in Murcia, and then continue with the open ground production in July. In fact, we have already been sowing in greenhouses and, at the same time, in the field for several weeks to be able to offer that continuity."

In any case, the use of greenhouse cultivation has not been the only strategy of the Murcian company to extend the product's harvesting calendar; the geographical diversification of the farms also plays an important role for Agromediterránea, which has more than 4,000 hectares of crops located in 7 provinces in Spain (Valencia, Alicante, Murcia, Almería, Albacete, Granada and Tenerife).

"In order to adapt to the climatic conditions, we gradually move to inland farms during the months after the start of the season. At a given time, we are working in the northwest of the province of Murcia, in farms in Yecla or Calasparra, and in the middle of summer we produce sweet corn at 800-1,000 meters of altitude in the area of Albacete, or in the province of Granada. In autumn we do the opposite; we go back to warm areas, which allows us to produce sweet corn until November," says Diego. At that time, the southern hemisphere, where summer begins, takes over.

Greenhouse cultivation saves 30-40% of water use
As pointed out by Diego Martínez, the company, which is part of the Foodiverse group, keeps the entire production chain under control, from seed to final product.

"Sweet corn has a very long cultivation cycle; almost 5 months in the open ground. But in greenhouses it can be shortened to 3.5 months. At the same time, we get the harvest to start earlier, making it possible to reduce water consumption by between 30 and 40%, as well as the need for fertilizers and phytosanitary products," he says. 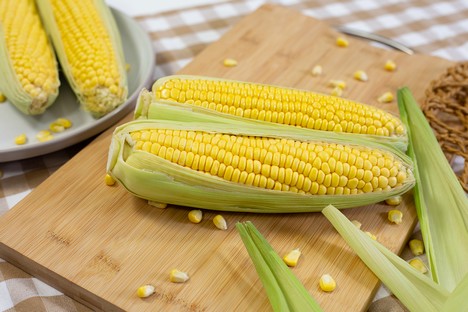 In fact, optimizing water use and reducing the water footprint is one of the objectives on which Agromediterránea has focused. "We use 100% localized irrigation in our productions and employ tools such as tensiometers or irrigation probes to optimize fertilizer and water inputs. Moreover, all our farms have water collection systems and we are able to accumulate several hundred thousand cubic meters of water every time it rains. This is a very important contribution, especially for the fields of Cartagena," says Diego. It is a firm commitment to sustainability.

Packaged and in bulk
Agromediterránea's capacity to produce more than 500 different products, including leafy vegetables, vegetables and aromatic herbs, both conventional and organic, and its ability to adapt to the requirements and preferences of its customers and the markets in which it operates, has allowed it to work with the main European distribution chains, with presence in some 10,000 points of sale. Flexibility in the packaging of its products is another of its strengths.

"We sell fresh, peeled corn cobs, weighing between 200 and 250 grams, in flowpacks, loose or in trays. However, there are also customers who ask us for the cobs in bulk, unpeeled. The husks help protect their freshness, but also give them an even more natural appearance," says the crop planning manager.