The global pistachio harvest for 2020/21 is up by almost 40% to a record 985,000 tonnes as harvests in the United States and Turkey enter the first year of the rotational crop cycle. Iranian production is expected to decline by 7% to 190,000 tonnes from the last year of the cycle, but exports are expected to increase by nearly 15% to 185,000 tonnes, partly due to last year's large inventories.

While many pistachios were shipped in the first four months of the marketing season, especially to China, exports are expected to decline due to declining stocks. 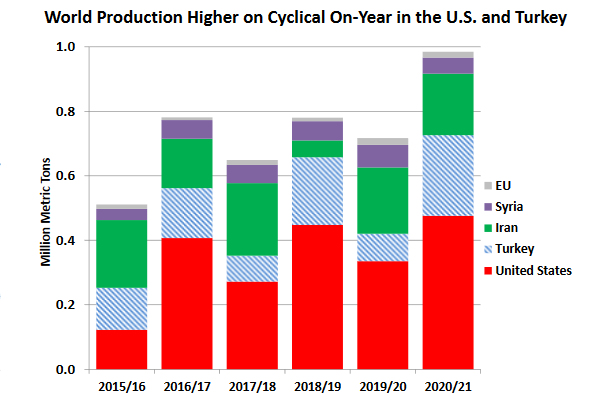 The Turkish harvest is expected to triple to 250,000 tonnes due to the high yields in the first year of the cycle. Strong fluctuations in cultivation are typical, but last year's harvest was particularly low due to a lack of pollination. About 80% of pistachio cultivation is concentrated in the southeastern part of Turkey, in the provinces of Aziantep and Sanliurf, and the trees in these provinces have benefited from the favourable growing conditions this year. The higher yield will have only a limited effect on international trade, as almost all of the harvest is destined for the domestic market.

China is expected to import 45% more to 150,000 tonnes, mainly from Iran and to a lesser extent from the United States.

The pistachio harvest in Europe is expected to decrease by 3,000 tonnes to 18,000 tonnes due to slight losses in Spain and Italy. Imports are expected to increase by 15% to 120,000 tonnes, with the US supplying most of the European market.