Stone fruits
The trading volume of apricots was 6044 tons. It was 10.5% lower than in the previous year, due to the smaller harvest. The total consumption of apricots (including imports) increased compared to the 10-year average (16,115t) by 8%. 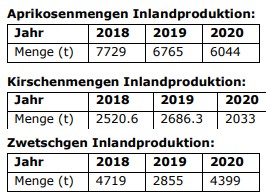 of domestic cherries was 2033 tons. The total quantity sold through the trade/retail trade is 4564 tons, of which 2530 tons are imported. The quantities sold through direct marketing or through the weekly markets are generally increasing. The hot summer weather influenced the growth of cherries. The fruits grew not as large as expected, but ripened quickly.

The strawberry market amounted to 23,783 tons (including imports). Compared to 2019, the market volume increased by 1%. Domestic production (SGA & organic) was 7260 tons, which corresponds to a
increase of 6%. The share of domestic production was 30.5%.