China is the largest ginger grower on the global market and has seen the demand for the product increase due to the pandemic. Heavy rainfall has also resulted in a large part of the old harvest being lost. Worldwide, this is causing market scarcity, while the demand has increased. The first ginger harvest will start again in China in early November, so for now, the pressure is mainly on Peru, Brazil and Thailand. Prices currently amount to around 40-45 Euro in Europe and 50 USD in the US for a 12 kg box. 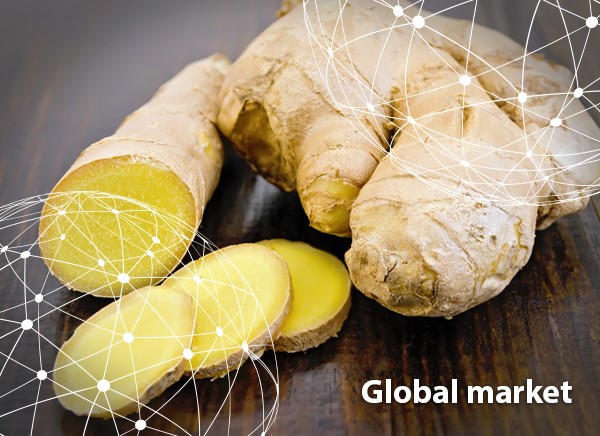 China: Prices will also remain 30% higher during the new export season
China has only just started with the new harvest, after which the ginger will have to be stored for 40 days before the export to Southeast Asia and the Middle East can begin. Exports to Europe will only start at the beginning of December.

Given the high prices currently being paid on the market, Chinese growers have planted a lot. Consequently, the prospect was for there to be 20% more ginger this season. But heavy rainfall has spoiled the situation. A number of ginger growing regions have been badly affected. For example, 20% less ginger is expected in the Shandong province. All in all, this ensures a comparable harvest to that of last year. Unlike in conventional cultivation, the rainfall did improve the quality of organic ginger in the Guangxi province. The production volume has increased by 30%, and the acreage has remained at the same level as last season.

Due to the coronavirus, the demand for ginger has risen sharply and stocks in China have been depleted. As a result, the price has occasionally risen by as much as 80%. Export prices currently amount to around USD 2800 per ton, while the dried one reaches USD 3100 per ton. The price will probably remain high until the start of the new export season. The price is expected to fall then, but given the weather conditions in the production regions, it will still be 30% higher than last year. For the fresh product, export prices currently stand at USD 2100 per ton, while dried ginger costs USD 2300.

Peru: Export record this year due to shortages in China
The export of Peruvian ginger has set a record this year. Since the start of the season, sales have increased compared to previous years. Up to September, Peru had shipped 29,436 tons of ginger to destinations across the world; 108% more than in 2019. In September, 98.7% more was shipped compared to the previous year with a total of 5,225 tons. An important factor to explain this increase in exports is the production shortage in China due to the high domestic demand.

Due to the excessive demand for ginger on the global market, Peru will end its season in January 2021 instead of March 2021. The ginger currently still being harvested, about 30% of the total, has already been sold. The new season will kick off in April 2021. It will start with the air freight of baby ginger, and from late May, it will also be exported by sea. Although the Peruvian production has already increased, the results achieved this campaign are likely to attract more players and motivate those already consolidated in the sector to increase their volumes.

The Netherlands: Anyone able to supply ginger is making a big profit
The global ginger supply is currently limited, leading to skyrocketing prices on the market. "China has little ginger available. They are talking about a 20% lower harvest. The Brazilian season is coming to an end. Thailand has no old ginger anymore and it will only be back on the market from February onwards. If you want to buy Peruvian ginger, you have to pay dearly for it," says a Dutch importer. "All in all, if you are able to supply ginger now, you'll be making a big profit. The price for a box of Brazilian ginger amounts to approximately 40-45 Euro; the Peruvian costs the same. And, after all, ginger is a standard item in supermarkets, and there are no alternatives, because there are only a few ginger producers.”

Belgium: The demand is falling, prices are not
After a period of high demand, the ginger market is currently a bit quieter. The demand has fallen somewhat, but prices are not falling. A Belgian trader expects prices for ginger to remain at a high level until the beginning of 2021 for Chinese, Brazilian and Peruvian ginger, as the new ginger harvest has yet to arrive. The quality is good and the supply is smooth.

Germany: Rising prices
The ginger supply in the German market is currently very limited. "There is a gap in the supply, which means that virtually all available stocks can be sold, regardless of origin or size," says a trader who buys ginger from various direct importers. In addition to Chinese ginger, there are also Peruvian and Brazilian productions on offer. In line with the tight supply, prices are quickly rising. "The current situation is comparable to that at the start of the coronavirus crisis, with wholesale prices amounting to around 40 Euro / 12 kg. Normally, prices at this time of the year stand at around 25-26 Euro / 12 kg.

France: Ginger price peaked two weeks ago
The ginger on the French market currently comes from Brazil, China and Portugal. Two weeks ago, Brazilian ginger prices rose sharply, but due to the arrival of more ginger and low consumption, the price has dropped again.

Italy: Market has stabilized, but price remains high
In Italy, most ginger comes from China, but Peruvian and Brazilian productions have also reached the shelves in recent years. Moreover, since 2019 there has been a consortium that grows and produces Italian ginger. Italian ginger stands out from other varieties on the market. From a commercial point of view, there was a shortage of the product during the lockdown due to logistical problems. Other producing countries exported less. The market stabilized in the summer, but prices remain high this autumn.

In Sicily, a field trial to test the potential for ginger cultivation is in its final stages. The prospects are good. It will be produced on approximately 20 hectares in the southeast of the island. This production will be added to the others present in the country.

South Africa: Price for ginger doubled due to increased demand in Europe
Most ginger on the South African market currently comes from China and Thailand. However, traders report that the price of Chinese ginger has doubled because the demand in Europe has risen sharply. Ginger started to sell quickly at the start of the pandemic, but after a while the demand fell again. Currently, the price on the wholesale market amounts to between 50 ZAR (€ 2.60) and 60 ZAR (€ 3.10) per kilo. There is also good demand for South African ginger every year, but this year's season is over and there is little domestic production on the market.

United States: "Perfect storm" for the trade
Since China has been supplying smaller volumes, more ginger has been shipped from South America to Europe. This has put pressure on prices on the US market. As a result, prices have increased by 30-40%. Not only have the shortages contributed to this pressure. The demand for ginger has also increased due to the pandemic. “People are trying to eat healthy during the pandemic, and ginger is certainly part of a healthy diet,” said a trader. "This has caused a sudden spike in the demand, which has remained quite strong throughout the pandemic." The demand is also not expected to fall ahead of Christmas.

Given the higher demand and the pressure on South America, there is a chance that the season in Peru will end sooner. Some traders are already talking about February or even January instead of April. However, other production countries will also enter the market in the coming months. For example, Mexico will be back on the market in December and Thailand in February. There has also been a slight drop in the price of Chinese ginger, and more is being harvested in Peru, which should result in a greater supply. The whole situation entails that many traders in the US are currently not looking just two months ahead, but half a year. “Before the crisis, we often had two containers here, but now I have four because you don't know what could happen in the ginger market,” said a trader.