With the start of autumn in the Northern Hemisphere, the demand for mushrooms is on the rise again; however, the impact of the coronavirus is causing the sector to be divided. Many of the mushrooms that end up on the shelves of retailers are doing extremely well. In fact, the demand in the UK market has increased by an average of 15% since the lockdown in early April to mid-October. However, special mushrooms intended for the catering industry are doing a lot worse due to the new measures introduced in various countries. 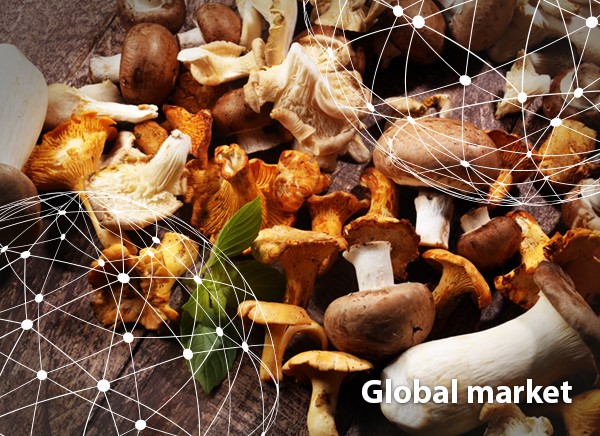 Netherlands: Neither sales, nor Brexit are the biggest concern in the mushroom market, but the deployment of staff
Despite the threat from the corona crisis, the trade of fresh mushrooms is still going strong, say Dutch mushroom growers. "When the second wave of the coronavirus arrived, we became weary, but the orders from supermarkets continue to arrive smoothly. We may be missing some sales to the catering industry, but while people cannot eat in restaurants, they'll certainly do it at home, and mushrooms are a perfect part of a home meal. Everything retail-related continues to run smoothly. Most supermarkets have reduced the number of products on the shelves, although those that have been given shelf space enjoy a higher rotational speed." The biggest concern for mushroom growers is therefore not the sales, but being able to continue deploying their staff. "We have not had any problems with that yet, but more and more countries are turning orange and we desperately need the labor migrants to get our harvest on the market." The grower is not that concerned about the impending Brexit. "I believe that not many Dutch mushrooms go to the United Kingdom anymore. It used to be one of our most important export markets, but nowadays that country mostly imports Polish mushrooms. We have not been doing much in recent years in the UK."

Germany: Season end for forest mushrooms is approaching
The end of the season for forest mushrooms is approaching in the German specialist trade. There are still some batches of chanterelles and porcini mushrooms arriving irregularly from Eastern Europe, but these are traded at sky-high prices. This is usually an indication that supplies will soon stop. "A few weeks ago, we were selling porcini mushrooms for 15 Euro / kg; now you can easily get twice that," said a trader.

The loss of the catering industry made the forest mushroom season harder across the board. The same applies to the normal white and brown mushrooms. In the run-up to the Christmas period, high sales levels are usually achieved, especially by the highest quality selections. The question is, however, to what extent these markets can continue in the times of the coronavirus.

Lastly, there is a significant increase in the consumption of exotic mushrooms, such as shiitake and oyster mushrooms. Parallel to the rising consumption, the domestic production is also growing. For example, in Saxony, the Chinese-Korean company Mushroom Park GmbH, which is fully specialized in the production of Asian mushrooms, has been operating for 5 years now. The company is also seeing growth opportunities when it comes to organic mushrooms and recently announced that it would like to get certified in the short term.

United Kingdom: Demand up by 15% since lockdown
Mushroom sales spiked in April, when the country implemented a lockdown. Sales at the retail increased by 30%. Sales have fallen somewhat again, but remain structurally strong, with 15% higher sales to retailers. This market has been somewhat weakened by the reduction in the sales to the food service. The situation in the UK is now changing almost daily as more local lockdowns are being announced. This has had an impact on the demand from the food service, but here too, in general, more people are cooking at home, so retail sales remain strong.

The nature of mushrooms as a meat replacement is another reason why sales have remained strong this year. This was also reflected in this year's summer sales. Normally, sales will drop somewhat then, but this year they remained strong. The supply also saw some ups and downs this year. The lockdowns in other European countries eventually had an impact on exports to the UK.

France: Bad season for wild mushrooms
So far, the wild mushroom season has not been going very well. September was a month with fairly high temperatures and little rain, so there weren't that many porcini mushrooms to pick. Only 15 days ago was rainfall recorded again. In the next few weeks, traders will be waiting to see if the weather becomes right for the wild mushroom harvest.

In terms of consumption, despite the coronavirus crisis, people still buy porcini mushrooms and other mushrooms. In fact, not much has changed in that regard.

Spain: Wild mushrooms badly hit by second coronavirus wave
With the arrival of autumn, the wild mushroom season begins. The season kicks off in early September, but gains momentum in late September or early October and ends around the Christmas period. Spain is one of the largest buyers and exporters of wild mushrooms and the biggest consumer is the catering sector. This year, the season has coincided with the arrival of the second wave of the coronavirus, as well as with new measures being implemented in several countries to prevent the disease from spreading further, such as the closure of hotels and restaurants. This situation is taking a severe toll on the sale of wild mushrooms. In Catalonia, a very important region in terms of wild mushroom consumption, the entire catering industry is closed, so selling has become difficult. Many distributors are not working, or are working very little, and have had to implement staff cuts. As a result, Spanish traders are increasing their exports considerably. However, the situation is the same in Northern Europe. In the Netherlands, Belgium and Germany, just like in Catalonia, the catering sector is largely closed and only take-outs are allowed. There is still some demand on the market. The cultivated mushroom industry is less affected by the pandemic, as it is being given more room on the supermarket shelves, especially for regular mushrooms.

Italy: High demand for mushrooms as season is underway
October is mushroom month for Italy, so the demand is high at the moment, which ensures favorable prices on the northern Italian wholesale markets, given that the supply is lagging behind. Some types of mushrooms, such as the Pioppino and Cardoncelo, are less abundant due to unfavorable temperatures during cultivation. More to the south, in Lazio, a grower also reports a high demand for mushrooms. “The price for the Boletus currently oscillates between 20 and 25 Euro / kg. The sales of the Pioppino and eryngii are also going well, and there is a higher demand for the shiitake.” In the province of Matera (Basilicata), more orders are being placed for Pleurotus eryngii mushrooms. "Prices remain stable and are about 10% higher than in 2019," reports a producer. "They range between 6 and 7 Euro / kg, but with the production of other Italian areas arriving we could see prices drop by about 20% in the coming weeks."

That mushrooms are a big trend now is also confirmed by a wholesaler in Milan: "Recently, there has been a clear improvement in the quality and quantity and this has been a turning point in the Boletus season. We mainly import from Romania and we are currently seeing higher quality and prices. The product is also supplied by Kosovo and Montenegro, where quality is improving. Prices are generally in line with the expectations and the annual averages of the past few years.”

Ukraine: Exotic mushroom production expected to double
Ukraine will be able to supply organic exotic mushrooms to the market in the short term. There are plans for the organic cultivation of Shimeji, Lions Mane / Pom-Pom and Enokitake. As the restaurant industry has reopened in several destination markets, the demand has picked up somewhat, although it isn't yet at pre-pandemic levels. The sector expects a greater demand next year, as the exotic mushroom production is doubling in some parts of Ukraine. The main markets for the Shiitake and other exotic mushrooms are the Netherlands, Germany and Belgium, but customers are very selective in their purchases. This means that only the best quality is considered good enough for export.

United States: Unpredictable market
The supply and demand are constantly shifting on the US market, which is resulting in a volatile market. This is making it difficult to plan ahead, because the balance could change again in two weeks, but growers need 4 to 6 weeks to determine their productions. This situation has been going on for just under 6 weeks and some traders have reduced their production by 80%.

Most mushrooms are supplied by California, Pennsylvania and neighboring Canada. However, the sales market has been turned upside down by the coronavirus. The demand from the food service has almost completely dried up, but that from the retailers and farmers' markets has increased. The latter in particular has become a surprisingly new market for mushroom growers. The consumer demand for mushrooms is expected to increase towards the end of October and will remain strong until January.

Mushroom prices have increased since the outbreak of the coronavirus in the US. This price increase is mainly a result of the higher costs for the growers. However, this differs per region. For example, prices are high and stable in California and lower in Pennsylvania, just like in Canada, due to the exchange rate between the USD and the CAD.

Australia: More demand for mushrooms. Imports mainly from China and South Korea
In Australia, the demand for specialties and exotic mushroom varieties is growing significantly. This is mainly due to a trend among chefs, but consumers are also discovering more and more mushroom flavors. All in all, despite a year-round supply, Australia is a net importer of mushrooms, with the imported volume being more than 50 times greater than the exported one. According to the latest Hort Innovation data, in the season that came to a close in June 2019, 3839 tons were imported; 17% more than in the previous year. Most of those mushrooms came from South Korea (3160 tons) and China (574 tons). At the same time, only 71 tons were exported, down 20 percent compared to the previous year, with Fiji (23 tons) accounting for most of the supply. The data also showed that 69% of Australian households bought mushrooms over the course of the year, and that 3% of the total production went to the processing industry.

New Zealand: Largest companies harvest 8,500 tons of mushrooms
At the latest edition of Fresh Facts, it was revealed that the harvest volume of New Zealand's seven main commercial growers amounted to around 8,500 tons. Domestic sales in 2018 were worth 42 million NZD (23.6 million Euro) and fresh mushroom exports were worth 1.3 million NZD (730,000 Euro).