There have been small amounts of sporadic rainfall over parts of the Klein-Karoo, but of the good winter rainfall over the southwestern Cape, they have had nothing.

The Klein-Karoo is in particular known for its apricots, for which there is good export demand.

“Fruit farmers in the Klein-Karoo are under immense pressure,” confirms Jannie Strydom, CEO of Agri Western Cape. “The production capacity of the area has diminished considerably. Around areas like Oudtshoorn, Calitzdorp, Barrydale the situation is critical. In Montagu and Kannaland it’s frightful.” 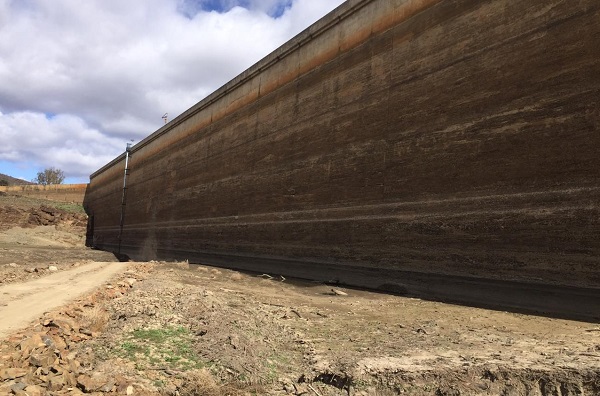 The Kammanassie Dam, an irrigation dam in the Klein-Karoo, is 0.1% full, the same as last year (photo supplied by Agri Western Cape)

Significant hectares of stonefruit orchards have been removed across the Klein-Karoo over the past five years, leaving only high value cultivars. There is also citrus, olive, wine and table grape production in the area.

Vegetable and vegetable seed production are possible alternatives, but it’s easier said than done after years of below-normal income and the cold chain requirements of vegetable production.

Fortunately, the Klein-Karoo can pin its hopes on summer rainfall which has commenced over the eastern parts of the country.

Worst drought in living memory
“You have to born in a district to understand it and to make a success of farming,” the stonefruit and wine grape farmer continues, noting that his 85-year old father, farming before him on the same farm, has never experienced a drought as extreme as this one. 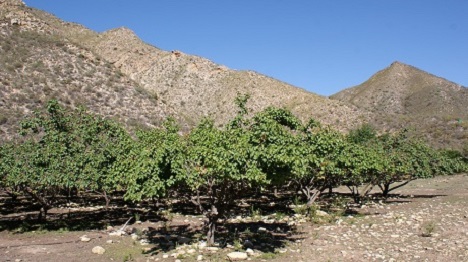 Apricot orchard in the Klein-Karoo

Over the past year on their farm near Worcester they measured only 240mm, falling as small amounts. January and February rain showers raised the hope of some good late summer rainfall, but it didn’t come.

On some family farms the sons have gone to do seasonal work in the United States and send remittances back home as farm income dwindles.

On the other hand, in the southern parts of the province many have commented on the beauty of the canola fields this season – canola, grown for oil, is a vital resource for bees whose swarms are strengthened on canola before being moved to blueberries and plums.

Grain production is the highlight in the Cape this year with above average canola and barley crops expected. 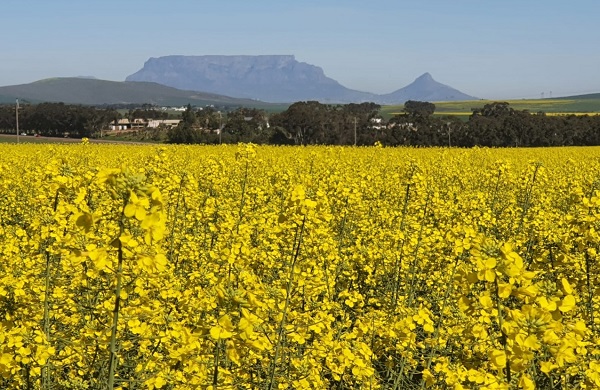 A field of canola outside Cape Town in August this year, crucial winter  forage for the bees that pollinate the southwestern Cape's fruit (photo supplied by Agri Western Cape)