In Bangladesh, pineapple chips are now being processed experimentally for the first time in Naniarchar county of Rangamati, a region famous for cultivation of the juicy fruit. Different varieties of pineapples are cultivated in the local hills. Among those, the 'Honey Queen' is a famous one. It looks beautiful and tastes delicious, and has been considered for this experimental project by the Department of Agricultural Extension. 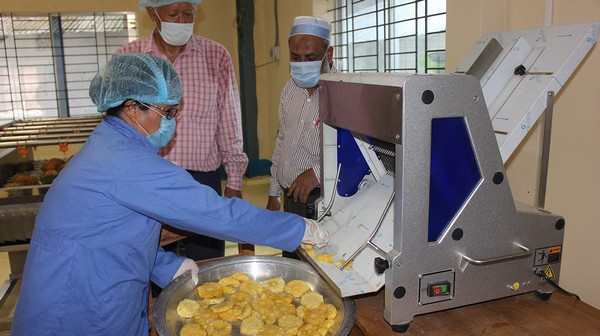 DAE's 'Development of Nutrition through Year-round Fruit Production' project is producing the chips at a fruit processing centre in the Dak Bungalow area.

Every year, a large quantity of pineapples is cultivated in the district and supplied across the country after meeting the local demand. Still, some fruits rot and are wasted if those are not sold in time, as pineapple has a short shelf life, local cultivators said.

are cultivated across 2,130 hectares of land with a production target of 55,835 tonnes. The fruit is cultivated on 1,200 hectares of land in Naniarchar county alone. Therefore, Naniarchar Horticulture Centre took the initiative to prevent wastage of the crop and help farmers get better return from their produce, said Mohammad Shafiqul Islam, deputy director of the horticulture centre.

The chips processing factory has been launched on a trial basis with the aim of processing pineapple and selling it all year round and thereby benefiting the farmers, the official said. No chemicals are added to the fruit to produce the chips, he added.

The pineapple factory has been opened in Naniarchar as a pilot project and exhibition centre and not for commercial production. Since there is huge production of pineapple in this area, the government as well as individuals have taken initiative to open such chips factory here, said Mehdi Masud, director of the project.