Reports have come from far and wide about the current state of the market for raspberries, blackberries and redcurrant. In the global market, there now seems to be mostly a small supply for a high demand. The coronavirus has also taken a toll on this market, as sales have been poor in recent months. Redcurrant has been the most affected by this problem, as it is mainly intended for the catering industry. Raspberries and blackberries have still found their way to the retail. Many countries are currently harvesting or with the season at its peak. Some notable developments are the rising popularity of black Goji berries in Japan, the warehouses full of redcurrants in Italy, the rising price for raspberries and redcurrants in Canada in order to cover the production costs and the abnormal price fluctuations in Mexico. 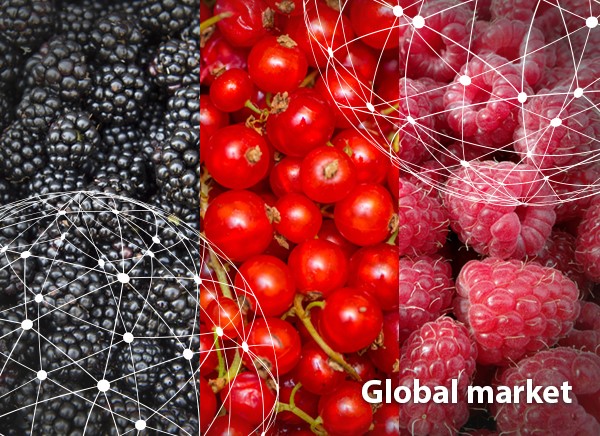 The Netherlands: Stable raspberry market, unpredictable blackberry market
The Dutch soft and small fruit season is currently underway. According to a soft fruit trader, there is currently very good demand for Dutch raspberries, with stable and good pricing. As for blackberries, the market is more unpredictable and the pricing is erratic. In recent weeks, the demand has been good for the redcurrants, which were hit hardest in this category due to the lack or limited presence of the food service, and prices have been more stable. According to the trader, more and more countries will have soft fruit in production in the coming weeks, so it is currently unclear how the supply and demand will develop.

Germany: Early start of raspberry season and small supply
The first tunnel raspberries from domestic producers hit the German shelves around May 25. Normally, the first German raspberries are not available until early June, according to a wholesaler. "Sales are good, but the supply is still very small. Trading prices are therefore also on the high side, which is partly due to the measures against the coronavirus and the increased production costs due to staff shortages, etc." According to the trader, the dry weather in large parts of Germany could also be a problem for domestic soft fruit.

In addition to German products, Portuguese and Dutch goods are also available. "For blackberries, for example, we still fully depend on the Dutch greenhouse production. It is currently difficult to predict when the first German blackberries will be picked."

Soft fruit grown domestically has been gaining ground in Germany in recent years. A striking aspect of this is the relocation of traditional open ground crops to so-called tunnels, especially in the case of raspberries. This means that the entire production can be cultivated with stable quality, regardless of the weather. Open ground fields are therefore increasingly exploited as 'Selbstpflückfeld', where consumers have the chance to pick the raspberries themselves.

France: Raspberries from Portugal and Spain
Since April, the raspberries sold on the French market have mostly been supplied by Spain and Portugal. The raspberries of Portuguese origin are especially popular because of their taste and large size. The first three weeks of the season were difficult for traders. The situation is now better. The prices are good and not extremely high. The French harvest will also start soon.

Italy: Similar prices for raspberries and blackberries and oversupply of redcurrant
The Sicilian raspberry season has come to an end. Production continues in Calabria, Basilicata and Venice and will soon start in Trentino-South Tyrol. The quality is good due to the temperature differences between day and night, but a smaller volume is expected compared to 2019. Despite competition from Spain and Morocco, the demand has also been good, so prices have been better than last year. Blackberries are grown in the same regions as the raspberries. The production is not as great as last year's and there is a strong demand, but also fierce competition, and the average price is the same as in 2019. The situation is very different for redcurrant. The market is nervous. When the crisis started, many importers filled their warehouses with redcurrants from Chile; however, the demand fell and now there is too much supply on the market, while the domestic season in Venice and Mantua is also starting again.

In Campania, the market trends are favorable for blackberries and raspberries. For the rest, Europe mostly demands raspberries, while the domestic market is mostly interested in blackberries. The competition from Morocco was strong last year, with a large volume at favorable prices. Redcurrant is mainly bought by the catering industry. In Sicily, some growers have specialized themselves in extending the seasons, making them last until June. Also, the harvest there is usually carried out twice a year. Blackberry and raspberry prices have not changed much during the lockdown, with average prices of around 13-14 Euro / kg (on the Verona market).

Spain: Stronger competition from Portugal and Morocco
The Spanish raspberry season started a little earlier than usual this year. Prices are under pressure and the demand is low due to the large volumes from Spain, Morocco and Portugal. According to Spanish exporters, competition from Morocco and Portugal is stronger this year. Moreover, there is less room for the Spanish production due to the start of the season in Germany, France and the UK.

At the end of the season, Morocco is there for Spain until July. Then there is no longer any place for the Spanish production on the market, and that also applies to neighboring Portugal. The coronavirus crisis has led to fewer staff being available at the destinations for Spanish raspberries, so quality testing and repackaging have not been carried out at the usual level.

The consumption of blackberries is still rising slightly every year; however, apart from one grower, nobody is able to offer the right varieties that the market wants in the autumn and winter months. In Huelva, the seasonal peak is therefore still reached in April. This year, the blackberry harvest started a little later and the volumes all came on the market at the same time. The demand is still low, mainly due to unbalanced volumes from Spain, Morocco and Portugal.

Poland: Raspberry price down by 12.5%
The main problem in the soft fruit sector is the shortage of workers in the field. Now that borders are opening up again and Polish workers from other sectors are helping with the harvest, raspberry growers have more options. Blackberries, raspberries and redcurrants are normally sold on the fresh market, but these are closed due to the coronavirus. Also, many Poles only go shopping once a week to avoid contact as much as possible, which has a negative impact on soft fruit sales. Prices for both domestic and imported raspberries have fallen by 12.5%. The impact of the weather conditions recorded this past month has not yet been taken into account, but Poland usually produces between 105,000 and 129,000 tons of raspberries on 27,000 to 29,000 hectares.

China: Ningxia is expecting the new Goji berry season soon
Due to the long distance, high prices and the fact that raspberries are not really popular among the Chinese population, very little of this fruit is imported. Raspberries are grown only in a few villages and the harvest is currently just starting. However, these are intended for tourists, and not for trade.

In China, Goji berries are much more popular. During the coronavirus crisis, the berry's sales in the country came almost to a complete halt. Exports stopped for a month, but have been picking up again since May. Exports were sold for around 8-9 USD / kg to the US and for 10-11 Euro / kg to the European market, so prices were at the same level as last year. There is currently a high demand for Goji berries from the overseas market. The product is being sold quickly, and there isn't a lot in stock. Some sizes are already sold out; however, the new season is underway with good harvest conditions in Ningxia's main production region. Black Goji berries are becoming increasingly popular, especially in Japan.

North America: Small stocks, prices up in Canada due to higher production cost
Blackberries
The stock of blackberries is small at the moment. Mexico has just finished the campaign, and Georgia only started supplying the market last week. A trader expects Georgia to remain on the market for a month. Stocks remain small. Besides Georgia, there is also a small volume from North Carolina and year-round supply from Guatemala. In California, volumes are expected to peak around the end of June. The prospect is that they will exceed those of 2019 due to an expansion in the acreage. In the fall there is a second harvest that starts in August and peaks in September. In the past two months, the situation has been tough for blackberries due to low prices, and many traders have stopped importing from Mexico. The demand is now increasing again, with slightly higher prices than last year.

Redcurrant
Redcurrants are not very popular in the US, so the production is small. They are bought fresh by Europeans in the country, but are otherwise processed into jams and jellies.

Raspberries
In California, the spring harvest is currently peaking and the production levels are expected to be comparable to last year's. Besides the production from Watsonville, California, supplies also arrive from Mexico. The raspberry market is very volatile, with prices dropping to $ 10-12 / kg (8.90-10.70 Euro) and suddenly rising again to $ 18-24 / kg (16-21.40 Euro). The demand for raspberries has been very different this year due to the coronavirus, which makes it difficult to assess, but the market seems to be picking up again.

In British Columbia, it will take a few more weeks for the season to begin. The volumes are small and the domestic production should be in high demand. "If the demand is comparable to that of strawberries this year, then we're good," says a grower from the region. In Canada, the price is expected to rise by 20-25% due to the higher production costs; partly a consequence of the coronavirus protocols, but also of the fact that the cost price of soft fruit has been increasing for a number of years.

Mexico: Abnormal price fluctuations on the market, even before corona
May is the peak season for raspberry harvesting in Central Mexico. For blackberries, it is April. Mexico has had some problems with the workers on the field, but stocks have generally remained stable. The main season for raspberries and blackberries is now over and things will pick up again in September, although some growers are able to supply all year round. Mexican growers have been dealing with abnormal price fluctuations on the market even before the impact of the coronavirus; however, the virus has made things worse. In any case, the season has not ended earlier than usual because of it.

Australia: Growth in cultivation for the domestic market
Even though the peak of the season is reached in the summer, a grower in South Queensland is now in the middle of his season, with large volumes and good harvest conditions in recent weeks. The company exclusively grows raspberries for a breeding program.

While Australia produces only small volumes, there was still a significant 37% increase last year. The Australian production is mainly intended for the domestic market and there is no export. It consists of raspberries (85%), blackberries (14%) and some small volumes of Boysenberries and Silvanberries. Production takes place all over the country, although mostly in the south, and it is carried out all year round.