Special crop from protected cultivation available all year round

Pointed peppers on the rise in Austrian Burgenland

LGV Sonnengemüse is a supplier of various types of regional vegetables to the Austrian food trade. In addition to cucumbers, radishes, various tomato varieties and peppers, its product range also includes fresh lettuces, potatoes as well as leaf, cabbage and root vegetables.

Furthermore, as an leading innovator, the company constantly conducts cultivation trials to reactivate old vegetable varieties, but also to test new, good-tasting vegetable varieties. For example, in the sunny Seewinkel region of Burgenland, Seewinkler Sonnengemüse has been successfully cultivating pointed peppers for several years now, which have an exceptional taste. Compared to the conventional so-called "block paprika", the pointed paprika is somewhat thinner-walled and has a less fleshy, finer bite. 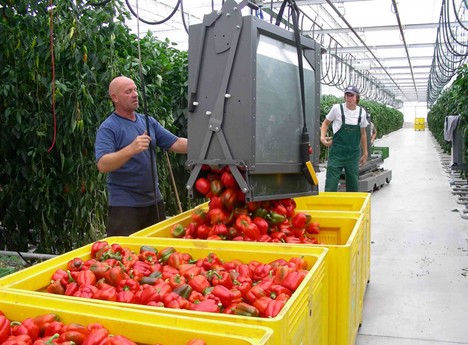 A look at the daily workings at the Unger company / Image: Hermann Unger KG

From sunny Burgenland
Vegetable farmer Michael Unger is a colourful person: He cultivates various block peppers, hot, light green peppers as well as red and yellow pointed peppers on 6 hectares of land in Pamhagen in Burgenland. He has a great passion for sweet peppers: the crops require constant care and control, and all the care and harvesting is done by hand. In addition to the family, Michael Unger has a team of 17 people at his side to support him in his work.

Peppers from protected cultivation are now available fresh all year round. But the pods taste particularly aromatic in summer, when they have had plenty of sunshine in the beautiful Seewinkel area.