Scientists at University of Tokyo (Japan) have developed a robotic arm for automated harvesting of Asparagus. They designed and developed an original arm-robot system that harvests asparagus in both outdoor and indoor agricultural fields. 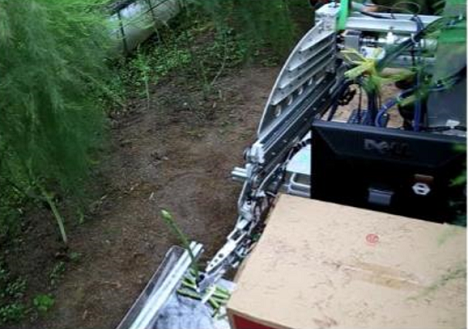 "Using the system, we carried out harvesting work automatically with input data related to asparagus vegetation in restricted settings. The developed fixed-site (non-wheeled) robot can reach out its arm to a stem of asparagus from a passage between two ridges on cultivated farmland without touching non-target stems or requiring changes to the farm conditions. Additionally, the hand at the tip of the arm stably grasps, cuts, harvests, and throws the stem it into a specific bag made for the gathering of agricultural crops. In mechanical terms, our originally developed robot arm has four degrees of freedom and is driven by motors. It harvests target asparagus stems without coming into contact with other objects in an agricultural setting, and the hand using the linkage mechanism of a pneumatic cylinder driven by air pressure, can hold the stem firmly and cut it. Our repetitive verification experiments showed that the mechanism is sufficiently accurate" explain the scientists.

Results confirmed the robot arm system could be used for automatically harvesting asparagus, and the system was endorsed by several farmers. Moreover, the scientists carried out experiments of harvesting asparagus on actual outdoor land and successfully harvested three stems sequentially under the condition that the operator had obtained the positional coordinates earlier.