Grapefruit is not the most popular citrus among European consumers due to its bitter taste. In fact, consumption continues to fall. The price of the grapefruit from Florida has risen sharply in the European market, even though the volumes are greater than last year. The quality has also improved. In Europe, Turkey and Spain are currently the two main suppliers. In Southern Africa, the outlook for the new season is already better than that of the previous one. In China, the Coronavirus crisis has resulted in lower sales and a smaller supply. 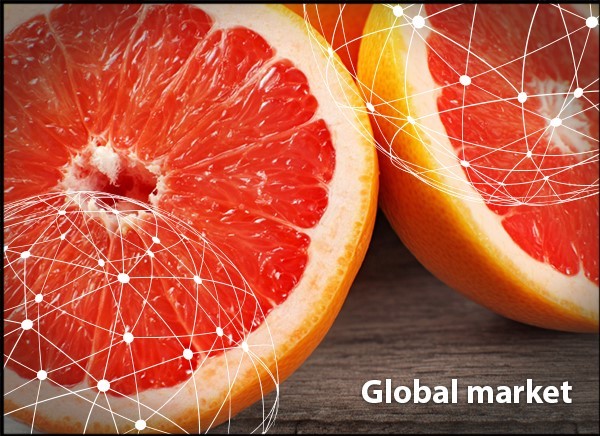 The Netherlands: Florida grapefruit prices on the high side
The grapefruit market is steady, according to importers. The prices for the fruit from Florida oscillate between 25 and 30 Euro and are therefore a little on the high side. For the grapefruit from the Mediterranean region, of which Turkey and Spain are the most important suppliers, the price is easily about 50% lower. The weather is currently favorable for the consumption of grapefruit; however, the increase in the supply of other fruits on the market, such as table grapes and the first summer fruits, will shift the interest towards other products.

Germany: Falling consumption and aggressive Spanish market
Grapefruits are not among the most popular fruits in the German market. “The fruit does not really fit in the lifestyle of young Germans. The choice of superfoods and exotic products is huge and grapefruit falls between two stools. This is partly due to the fact that grapefruit is not suitable for a quick snack.”

Consumption in Germany has been falling clearly in recent years. "Although there are some new grapefruit varieties that are significantly sweeter than the bitter fruits of yesteryear, it is mainly the elderly who consume grapefruit." The Florida grapefruits are still the most popular, although the retail is no longer so keen on this variety because of the often poor quality. “In the retail, however, everything is down mostly to the appearance and price of the grapefruit. In the better segment, the range will almost without exception consist of Florida varieties."

At the moment, it is mainly Spanish grapefruits that dominate the trade. In mid-May, people normally switch to South African fruit; however, due to the bad weather in Spain at the start of the season, the Spanish season is expected to end early. Turkish grapefruits have, in any case, remained a rarity in the retail in recent years, as Spain is a very aggressive competitor and prices are therefore hardly ever interesting. Turkish grapefruit is also becoming scarcer on the wholesale markets.

France: Consumption highly dependent on market trends
The grapefruit season has been going well in the region of Murcia, Spain. The rainfall has clearly done the fruit well and sizes are large. The season should end around mid-April. The consumption of grapefruit by the French, however, remains strongly dependent on market trends. Consumption is likely to increase in April if people go on a diet before the summer holidays.

China: Low supply and consumption due to Coronavirus
There is currently little grapefruit on the market. During these months there is always a smaller supply, but currently, due to the Covid-19 / Coronavirus crisis, the supply is slow and therefore less is available. Imports are still arriving from Israel and Egypt and products from Taiwan are also marketed, but sales are slow. The market is still recovering. Around April and May there is usually a greater supply on the Chinese market, because then more countries, including South Africa, are in production and are able to export to China.

Florida: Larger volumes at stable prices, diseases remain a challenge
Exporters are currently completing their campaigns. Most of them will go on for another 4 weeks, although there are also exporters who ship their grapefruits until mid-April. In Florida, volumes are 15 to 20% greater than at this same time last season, with larger calibers. However, this does not apply to all growers; it depends strongly on the variety, soil and tree quality. The demand for grapefruit remains strong. Much is now going to the domestic market, now that exports to other countries are declining. The prices remain stable. The biggest challenge for Florida growers is the Huanglongbing Citrus greening disease which, according to a trader, mainly affects the old trees that give the best grapefruit.

Texas: Stable demand, price and production
The grapefruit production in Texas started in early December and will continue until May, "as long as it doesn't get too hot throughout the year," says a grower, who mainly cultivates the Rio Star. "Otherwise we finish in April." The demand for Texan grapefruits is strong this season, even slightly stronger than last year. The prices are also comparable to those of the previous season. Both prices and the demand should remain stable as long as no crazy weather phenomena are recorded. "We may still have to deal with some frost," says the trader. "But I think the risk is already low."

California: Small volumes, but no gap in the season
The red grapefruit production stopped a few weeks earlier than normal in the Central Valley / District 1 in California. A week and a half earlier, the Riverside Region / District 2 came into production. Most of the volumes there are expected to arrive from around mid-April and the supply should continue until the end of July or the first week of August.

"At the moment, the volumes are quite small, but there are no gaps in the season," says a trader. Any gaps could still be filled with Mexican grapefruits, but only for the US market, as Canada only allows US grapefruits. Prices for the product from California are 20% lower than last year. "It is possible to obtain good prices for grapefruits with a good size, while they will be lower for standard-sized ones," says the trader. The highest grapefruit prices now stand at $ 16, but the average amounts to $ 11-12.

Israel: Nothing wrong with production, but strong Shekel limits exports
Growers in Israel have no reason to complain when it comes to the volumes and quality of their grapefruit. At the beginning of 2020, however, the value of the Israeli currency, the Shekel, rose considerably and that is taking a toll on Israel's competitive position on the international market. The export from Israel to China and other destinations in East Asia is limited by the outbreak of the Covid-19 / Coronavirus. The largest buyer of Israeli grapefruits is currently the domestic juice industry. Due to export problems, Israeli grapefruits have become cheaper for this sector.

South Africa: Dry weather in Limpopo a problem, but growers have better prospects for this season
There has been prolonged dry weather in the northern grapefruit producing regions, although rainfall has been very recently recorded there, so the situation of the province's water reservoirs is now slightly better. Growers in the Letsitele region, in Limpopo, again expect a 70% restriction on their water reservoirs (they have now received 30% of their water, just like in the previous season).

The Letsitele region has the most grapefruit orchards in the country, but it is also the citrus growing region with the greatest uncertainty ahead of the coming season due to the extremely dry weather in the country. Many growers have cut down their trees as a result and some orchards are on "life support". That means that these trees only get enough water to survive, resulting in lower yields. The estimates for the 2019/2020 citrus season are expected soon. Grapefruit growers in Southern Africa (South Africa, Eswatini and Zimbabwe) are hopeful of obtaining a larger harvest than in the previous season. The harvest will kick off within a month. The acreage in the whole of South Africa remains fairly stable (7,600 hectares).