January is traditionally a quiet month in the onion market. Dutch onion traders are currently in the transition between export seasons, now that Senegal has closed its market to imported onions in order to protect its own crops. This year, noticeably more Spanish onions have been shipped to West Africa, where Dutch onions are normally dominant. India is seeing a slow recovery, now that two regions are starting the new harvest. In China, the market is quiet due to the Chinese New Year. In the US, stocks are slightly below average and there are some quality problems in storage. In February, Mexico, New Zealand and Egypt will have a new harvest of yellow onions. South Africa has now been on the market for 2-3 weeks, with exports going mainly to the rest of Africa and Europe. 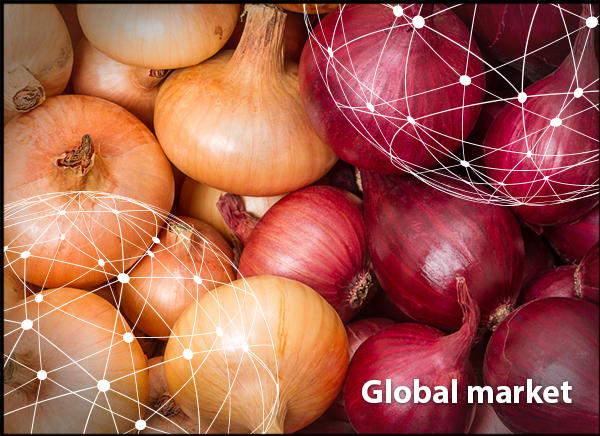 The Netherlands: Quiet market after good first half of the season
Following the export of over 724,000 tons of onions, the market situation is now quieter, which is actually a yearly trend. Almost 60% of the stock was devoted to exports in the first half of the season. Dutch onions have especially benefited from the situation on the Indian market and its export destinations. More also went to West Africa, but on January 15, Senegal closed the border to imported onions in order to protect its own production. As a result, the demand quickly fell and prices came under pressure. In December, the price still amounted to 17 cents per kilo, with peaks of 21 cents. In January, the price dropped to 15 cents per kilo, with peaks of 18 cents in the case of regular yellow onions. Traders hope that the demand will pick up again in the coming weeks with exports to Eastern Europe, South America and the Far East.

Belgium: Uncertainty about prices
After a period with a lot of exports, peace has returned to the Belgian onion market. Large volumes of onions have been shipped to Africa, but since several countries have already closed their borders to imported onions, things have been fairly quiet for Belgian onion traders. This puts the prices under pressure. It is fairly uncertain whether prices will rise in the coming weeks.

Germany: Satisfactory development of second half of the season
Germany is having two completely different seasons. First there was a very limited production, with shortages across Europe, but the current season is developing satisfactorily. The export is going well and almost all leading onion traders are on the market. Germany is also taking advantage of the successful season in the Netherlands.

Some issues within the sector are the strict guidelines regarding crop protection, as well as climate change and the growing shortage of laborers. As a remedy, a great deal is currently being invested in the German sector, including new plantations, irrigation infrastructure and storage capacity.

The German onion market shows a number of interesting trends. First of all, there is a growing demand for red onions, which for the time being are mainly imported from the Netherlands. Discounter Aldi recently decided to only offer organic red onions. The main overseas supplier is still New Zealand.

France: More demand for French onions on the domestic market
This year's onion harvest has been fairly good, both in terms of quality and volume. Nevertheless, there is a huge difference of quality between onions harvested before the end of september and onions that have been harvested after. Those volumes depend on productors and regions. Some traders want to be able to offer French onions to their customers all year round; in fact, the demand for them is also on the rise in the domestic market. Prices are quite correct; however, these are not stable because the stocks from other countries in Europe can still have an impact on the market.

Spain: Unusually high demand for onions in December and January
The demand for onions is falling after some unusually good market conditions in December and January. Spain has a larger volume of onions than last season. The prices between summer and autumn were quite low, especially for the larger sizes, which were not as demanded. That changed around Christmas, when there was a very high demand from the Netherlands, France, Italy and Eastern Europe. More onions also went to West Africa, a market that is normally dominated by the Netherlands. There has also been a clear price difference between standard and quality onions this season.

This week, however, the demand has fallen remarkably. "This is something that usually happens around this time of the year," says a representative of the sector. “West Africa has stopped importing because its own production is about to hit the shelves. It is still unclear how things will go with the onions in storage. It will mostly depend on their quality, but given the weather, there shouldn't be a problem in that regard."

Italy: Shrinking stocks generate more demand
Onion sales are going well in Italy, with satisfactory prices and declining stocks. The market situation has been described by a company specialized in the processing and sale of onions in northern Italy. At the end of January 2020, the price for yellow onions amounted to between 30 and 37 cents per kilo. At the same time, white onions cost 50 cents per kilo and the red ones 45 cents. There is increasingly less in stock and nobody knows yet how the market will behave, leading to a rise in the demand for the crop. On the wholesale market, we find Italian and Dutch onions with prices ranging between 43 and 95 cents per kilo, depending on the variety, size, packaging format and origin. Italian pink onions can be sold for up to € 1.40 / kg and French shallots for up to € 1.70 / 500 g.

Egypt: Exports on the rise due to situation on Indian market
In Egypt, the end of the red onion season is around the corner and the country is switching to the yellow onion harvest in February. Egypt has benefited from the situation in India and a trader even reports that they has been able to export 75% of their onions to this market. The Egyptians are also taking steps for the export of onions to the European market.

India: Slow recovery on the market
The situation in India seems to be getting somewhat quieter now that two Indian regions will soon deliver a new harvest. This is reducing the import of onions, especially of the red ones. According to the first estimates for 2020, onion cultivation will increase by 7% this year.

China: Little movement on the market due to Chinese New Year
Onion prices rose slightly around October, but have remained stable since then. This season, exports have gone differently compared to last year, when much was still shipped to Europe. This is not the case this season, because there are enough Dutch onions in storage and it is difficult for Chinese companies to compete with them. The Dutch onion is just a bit cheaper than the Chinese one. Nevertheless, exports to the Middle East and other Asian countries have been going well.

It is currently quiet on the market because the Chinese New Year is about to end. Most companies are closed during the New Year. Furthermore, it is also quieter than usual because there is not much movement on the market, given the current coronavirus crisis.

United States: Shrinking onion supply
The onion stocks in the Northwest have fallen slightly below the average recorded in the same period last year. The harvest was smaller this season due to the cold weather and rainfall. In the summer it remained cool and this resulted in quality problems. This is particularly clear in the case of yellow onions and not as much in that of white onions, which were harvested earlier. The onion supply has consequently shrunk.

South Africa: Harvest in Koue Bokkeveld for export to Africa and Europe
The South African onion season has been underway for 2-3 weeks in Koue Bokkeveld, in the Western Cape. Exports to the rest of Africa remain stable, while exports to Europe will be lower than the unusually high volumes recorded last year. The rain two weeks ago, which caused difficulties to grape growers in another region (Hex River Valley), had no impact on onion growers in Koue Bokkeveld. This is the only region where yellow onions can be grown for export. Domestic prices are 8% lower than last week, with 0.22 € / kg (4.23 ZAR) at the moment. Analysts see that there is a high demand and that prices will stay at this level or even rise again.

Australia: Growing onion exports to Indonesia and Europe
The value of Australian onions has increased by 3.8%, while the volumes sold have remained stable, with a 1.7% growth. Pre-packed onions played a major role in the sale of onions last year. There are also packed onion mixes on the market containing several varieties. Tasmanian onions generated 18.5 million Australian dollars in the last months of 2019 (11.3 million Euro), thereby doubling the previous year's figure. Furthermore, exports to the relatively new Indonesian market have quadrupled and those to Europe have doubled.

New Zealand: New harvest about to arrive
The season in New Zealand is about to start. According to reports, the prospects are good when it comes to the quality of the onions, despite the lower rainfall during the early summer.