“We’re beyond just recycling: the world is ready for our compostable resins”

A retailer has rolled out 100% home compostable and biodegradable shopping bags as well as bags for loose items of fresh produce at its store in the new Constantia Emporium shopping centre in Cape Town, built using the latest in sustainable and low-energy technology.

The bags were manufactured at two different plants but both using Novamont’s Mater-Bi resin. 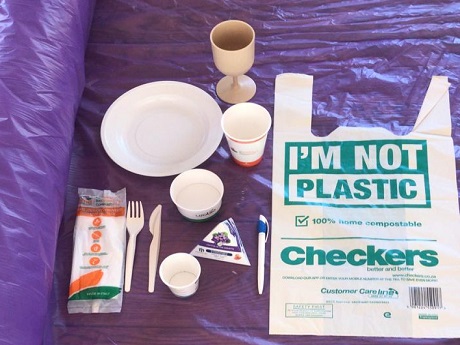 The range of compostable products made of the Mater-Bi resin: the purple film is biodegradable agrimulch for vineyards and orchards

Same manufacturing equipment, different raw material
“The industry based on fossil-fuel-based plastics can be transferred to compostables very simply. We’re not creating new factories, it’s very elementary what we do: on the existing machines, we’re lowering the temperature at which the resin is heated (from approximately 162°C for plastics) and with virtually no other change at all, you can run the compostables on your machine. That’s an absolute revolution.”

Andrew Pollock says that he saw a customer at the Constantia Emporium Checkers who was so excited at the plastic alternative that she bought thirty home compostable bags on the spot, to last her into the future.

“The world is realising that fossil-fuel-based, single-use plastics just don’t work anymore and they’re looking at the alternatives. Interest in compostable plastic has been building so fast, it’s just amazing. We’re getting so many enquiries. We are aiming to become the first choice of South African decision-makers. If you look at the big picture: we are on the cusp of something very big indeed, and most food retailers around the world have identified Novamont as the bespoke supplier of a compostable alternative to plastic. We have all the certifications for Europe and USA.”

Trying to get plastic bag levy scrapped on compostable bags 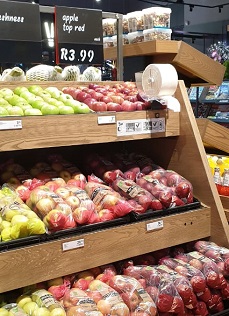 A number of hurdles still have to be cleared, such as the tax on plastic bags (supposed to be ringfenced for the plastics industry but it’s not). They’ve been in talks with National Treasury to declare compostable bags tax-exempt, which would stimulate huge latent demand for their product.

The other regulatory hurdle is that the South African Bureau for Standards hasn’t yet developed a standard for compostable plastic, we with them, too, Andrew and his partners have been in discussion.

Andrew sees big opportunity for Mater-Bi resin as, for instance, the inner coating of the well-known 7kg potato bags which are currently not recyclable because of the plastic coating (and the South African industry makes about 240 million potato bags per year), or as the inner bags within fertiliser bags which can then just be tossed in a field when the bag is empty (and the strong outer bag preferable re-used). He points out that Mater-Bi resin was not specifically designed to be weight-bearing, but that its elasticity is superior to plastic.

Possible South African manufacture of Mater-Bi resin
“We’ve been granted a multi-year contract by Novamont to become their agents in Southern Africa, where much of the plastic for Africa comes from. The other thing that’s going to have a very big impact is that Novamont realises that South Africa should be making its own resin, so they’ve agreed in principle that we’ll eventually manufacture our own resin under licence, using South African biomass of which we have millions and millions of tonnes.” 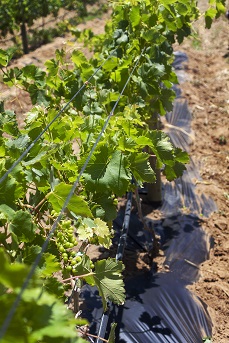 Possible sources of biomass would be forestry by-products as well as the resin-rich byproducts from the new medical marijuana industry.

The company visited California earlier this year and met with the California Sustainable Winegrowing Alliance to gauge interest in their compostable biomulch (read a previous article here).

The biomulch (pictured right) would fall within the scope of the AGOA agreement, which means that South Africa could supply compostable products at a more competitive rate to the American market.

“Our biomulch trial in a Constantia vineyard is still going well 15 months on, and the compostable mulch is now being tested by Vinpro, the South African wine industry body, in vineyards near Darling. We find that with mechanical machinery running over our film, our film stretches whereas plastic tears. People walking over it doesn’t damage it.”

Andrew notes that he was already an adult when plastic bags appeared in 1977. “I can remember a world before plastic bags. The legacy I’d like to leave is the replacement of single-use plastic with many home-compostable alternatives. I think we’ve got around a decade in which to heal a poisoned planet.”