Plastic mulch is used extensively in vegetable and fruit production, particularly on crops with a shorter life cycle, and the recent drought has probably intensified its use which, in South Africa, is still exclusively made from standard plastic.

However, elsewhere the tide is turning against plastic in its many forms, including agricultural plastic mulch, as the European Parliament has voted to ban it with effect by 2021. There is the possibility that in future Europe could start expecting their agricultural suppliers to similarly move away from conventional plastic, in the same way that it has influenced the monitoring of ethical standards or chemical residue levels in the local fruit industry. 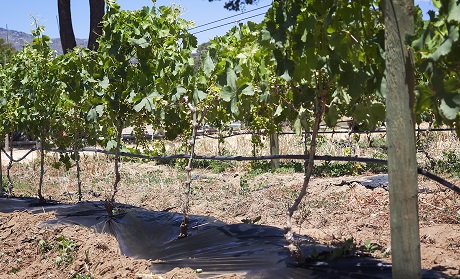 Foreseeing this possibility, as well as the opportunity to lessen the amount of plastic left behind in the soil, Arthur Williams. Andrew Smith and Andrew Pollock have this year formed the Really Great Material Company (RGMC). They represent Italian company Novamont, whom they consider the gold standard of bioplastics manufacture. Novamont has developed the Mater-Bi range of proprietary resins from starch, cellulose and vegetable oils, widely used by Spanish and Italian vegetable growers.

Trials at table grape and wine farms
“I have seen myself on a wine farm in the Boland how much plastic waste is left in the soil from years of using plastic mulch,” says Andrew Pollock. “It takes a team of twenty workers a whole week to try and collect it from the field and still a major part gets left behind. Furthermore, often what is collected is just dumped at a landfill site as it is soiled and cannot be recycled. The accumulation really adds up after the years.”

Western Cape wine farms are tourist attractions and often showcases for the best in sustainability practices and therefore it made sense to trial Novamont’s biodegradable plastic mulch with newly planted wine vineyards at the Constantia Glen wine estate.

A second trial has started in the table grape vineyard of Buitenverwachting wine estate, also in the Constantia Valley, with Mater-Bi agrimulch brought over from Italy (pictured right).

The Really Great Material Company envisages that in future the raw material will be imported and the mulch film manufactured in South Africa under license from Novamont.

Mater-Bi mulch shows superior elasticity and less tearing
“Buitenverwachting’s viticulturalist, Peter Reynolds, has told me that their farm labourers find our agrimulch easier to lay as it naturally stretches, while plastic tears,” notes Andrew Pollock, one of the founders of RGMC. “A tractor driving down the rows can tear the plastic under its wheels and the summer Southeaster [wind] damages the rest, requiring replacement. In this trial we found that the mulch was undamaged by tractor wheels passing over it.”

The mulch is intended to be left to degrade naturally in the soil, converting to carbon dioxide and feeding into soil microbial systems.
Biodegradable agrimulch is just one among a myriad of plastic applications and the RGMC is keen to put Italian technology to many more uses in South Africa, like vine ties and pheromone clips. 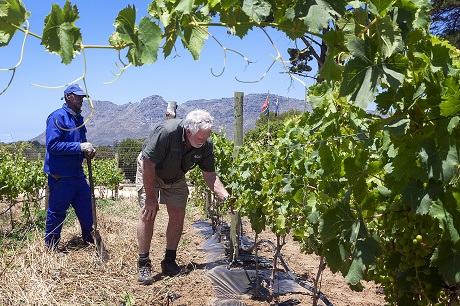 Compostable shopping bags are an obvious target and to this end, RGCM has been in talks with a number of plastics manufacturers and retailers, many of whom are keen to get involved.

While a biodegradable agrimulch is still much more expensive than conventional plastic mulch (a factor that will probably change as critical mass builds up in the bioplastics sector), Arthur points to conventional plastic’s equal but overlooked cost. “People think plastic is cheap but it isn’t cheap – there’s a tremendous cost to the environment and to society, it’s just that this cost has never been worked into its price.”