The demand for bananas in Europe and the United States is low during the summer. However, due to the low volumes available, especially in South America, stocks are limited and trade prices have remained stable. The low production in Latin America is mainly due to the weather conditions. The impact of El Niño was particularly noteworthy. The demand for bananas is expected to increase again when the summer holidays come to an end. Production is also expected to increase again by that time. 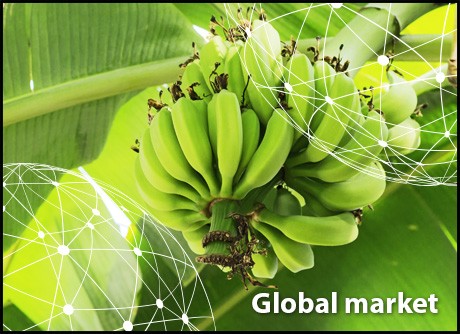 The interest in organic bananas is growing. However, organic banana growth is limited to a small region in Latin America. Organic bananas need a drier climate that facilitates the fruit's growth. As pesticides cannot be used. Ecuador, Peru and Mexico are countries that are suitable for the cultivation of organic bananas.

The first reports of TR4 in Latin America were made in late July. The fungal infection was detected on a banana plantation in northeastern Colombia. Colombia confirmed the presence of TR4 on 8 August. 175 hectares of bananas were infected, and 168 hectares have already been cleared. The country has taken measures to ensure that the Panama disease does not spread. TR4 has previously been detected in Indonesia, Australia, the Philippines, Jordan and northern Mozambique, among others.

Ecuador
Heavy rains and fewer hours of sunshine have caused the country's banana production to fall. Those bad weather conditions are attributed to the impact of El Niño. Despite the lower production, Ecuador is increasing its market share on the European market.

Colombia, Costa Rica and the Caribbean
These Latin American countries normally enjoy a hot and dry climate. El Niño, however, has brought the opposite weather conditions, thereby also reducing banana production in these countries. In addition, TR4 has been detected for the first time on a banana plantation in Colombia. It is the first time that the fungal disease, also known as the Panama disease, has been detected in Latin America. According to officials, this will have no consequences for the export of bananas.

Panama, Nicaragua and Honduras
Exports from these countries have increased due to the introduction of less strict customs duties. After all, what counts for these markets is the price for bananas, and with the relaxation of the rules they have become cheaper.

Mexico
This country recently saw a decline in banana cultivation. The fruit's production in the Mexican state of Tabasco, in the south of the country, has been reduced due to the weather conditions. Especially the wind has had an impact on the production. The price of Mexican bananas is therefore high, while the price for bananas from other Latin American countries remains stable. Mexico has the right climate to grow organic bananas, which the US market currently demands.

The Netherlands: Banana prices remain remarkably good for the summer
The low banana production earlier this year has had a positive impact on the current market situation in the Netherlands. Although the banana market is traditionally slow during the summer holidays, stocks are limited this year and trading prices have remained fairly stable. With the summer holidays coming to an end in some areas, consumption will pick up again later this month. Then the supply is expected to increase again.

Germany: Quiet market
Due to the high temperatures, summer fruit is in great demand, and this has happened at the expense of the banana trade. The holiday period has also taken a toll on sales. However, the supply from the ripening centers was adjusted to this as a precaution, so the balance between supply and demand has remained virtually the same. Prices have also remained the same as a result, although Panamanian and Ecuadorian bananas have been sold with great discounts here and there on the wholesale markets. In order to prevent the quality of the bananas from suffering too much due to the weather conditions, many batches have been transported directly from the cooling facilities, rather than having them on display on the wholesale market.

Switzerland
Just like in Germany, there are hardly any spot market sales in Switzerland. The vast majority of bananas are sold directly through contracts. In total, there are only 2 or 3 independent ripening companies on the Swiss market, while the large supermarket chains use their own ripening centers, says a Swiss wholesaler. "The entire market is dominated by the large suppliers. Some batches are still imported via South Germany and traded here. In any case, the smaller, independent ripening companies have to rely on the hotel and catering industry, and some smaller customers." Due to the warm weather, the demand for bananas has fallen and sales are slow, according to the trader.

France
The bananas from France come from both Latin America and Africa. Bananas from Latin America mainly arrive via the port of Dunkirk, while the African production enters the country via the southern ports. It is through these ports that the bananas are distributed throughout the country. France grows part of its bananas itself in the overseas regions of Guadeloupe and Martinique. These bananas mainly end up on the market in the major French cities.

China
This year, the import of bananas has increased considerably in China. Imports from the Philippines in particular have risen sharply; so much so, that China has overtaken Japan and has now become the largest importer of Filipino bananas. Other countries from which China imports are Laos, Myanmar, Ecuador, Brazil, Colombia and Costa Rica. Cambodia was able to start exporting bananas to China this year.

The local production is still in the off season, so the supply is not that great, but it will increase again in August. The production area in Hainan is now finishing, and Guangxi is currently in the initial phase of production. Bananas are also produced in Guangdong, but the production there has yet to reach its peak. The price of bananas has been fluctuating a lot in the last few weeks. At the moment, it is rising slightly, but it is not yet certain whether this trend will continue.

The average banana price is 10% lower compared to last year. The demand for bananas has also fallen. Since the beginning of 2019, the supply of bananas is estimated to have fallen by 14% compared to last year's volume. In South Africa, some banana growers are switching to avocados or Macadamia nuts, as growers obtain higher yields from them.

United States
Both banana production and demand are soon expected to rise in North America. "The stock of bananas has been good and stable these months," says a trader. "But with summer coming to an end, the demand will rise in the coming months." A steady supply of bananas is coming from Latin America, especially from Ecuador, Costa Rica, Colombia and Guatemala.

Australia
The most important production region in Australia is in Northern Queensland. At the end of the season (June 2018), 388,265 tons of bananas worth 482.2 million Australian dollars were produced. Given the few minor outbreaks of TR4 last year, the quarantine rules in the Australian banana industry have become stricter. The bananas grown in Australia are mostly intended for the domestic market; however, in the long term, growers are considering the development of a niche market for premium bananas intended for export. In New Zealand, the commercial banana industry is also looking into the possibility of expanding.