The Italian pear sector is struggling. Despite the relatively limited volumes available, prices remain low. The sector is experiencing quality problems in both Spain and the Netherlands. In France, consumption is lagging behind, while European pears are selling quickly on the German market. In Australia, exports have increased by no less than 75% last year. In the US, the domestic production is expected to last until June, at which time the market will switch to exports. Chinese traders are exporting somewhat less this year due to their disappointing production, but are doing well in the domestic market.

Italy: More cooperation needed to make the sector profitable
Around 2.5 million tonnes of pears have been grown in Europe over the last ten years. As the largest European grower, Italy is responsible for more than 35% of that volume. That fruit comes mainly from the Emilia Romagna region. Around 61% of orchards and 68% of the total production correspond to the provinces of Ferrara, Modena and Bologna.

The domestic pear sector, and Emilia Romagna's in particular, is going through a difficult period. Current prices are not profitable. "Prices and down payments stand even below the production costs," says a grower.

Companies are forced to deal with climate change and disease vectors, such as the brown marmorated stinkbug. They also have limited access to plant protection products. Growers have invested in material and new orchards and set up organizations, but all this hasn't been enough to make the sector profitable. "We must invest more in research into new varieties and, above all, promote cooperation at market level."

This year, higher prices were actually expected on the Italian market, because volumes are relatively low this year. There is about 23% less of the Abate pear, 20% less of the Kaiser pear and 7% less Conference available. Last year, the last Abate pears were exported in week 20. This year, the export is expected to end in week 18 or 19. 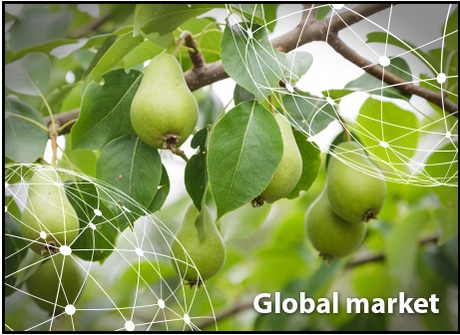 The Netherlands: Quality problems taking toll on pear market
The situation in the Dutch pear market is marked by quality issues. Prices for the higher quality fruit are still going up, but there are also plenty of lower quality batches available. Unlike apples, whose sales are mostly domestic-oriented, pears need to be exported, but the demand from Eastern Europe in particular is disappointing. Meanwhile, the first Williams and D'Anjou pears from Argentina have arrived and the Packhams and Abate Fetel pears are also expected soon; however, the wider top fruit selection on the European market ensures a quieter start. Many wholesalers choose home-grown fruit. The price level is also lower than last year, when the market was a lot emptier.

Spain: Size determining price
The pear stocks are generally lower than last year around this time, especially for varieties such as the Blanquilla and Conference, which were hit by hail. Due to the high summer temperatures, there is a surplus of small and medium sizes, and it is difficult to find large sizes. This is reflected in the prices. There is hardly any money to be gained from small fruit. In the meantime, the rare large pears are being sold for good prices.

According to a grower and trader, the demand is not great. Many growers who don't have the capacity to store the fruit for a longer period of time have tried to sell as many pears as possible in February and March for fear of suffering quality problems. As a result, the supply is currently a lot higher than the demand. The market should pick up again in April.

According to the exporter, this is an exceptionally bad year for the Blanquilla in terms of quality. The quality is unreliable, both due to the impact of hail and to problems with the sizes. Blanquilla pears are currently doing well in Spain, Israel and Cyprus, while the Conference pears are mainly sold on the domestic market, in southern Italy and in Portugal.

Unless extreme weather conditions are recorded, the stone fruit harvest is expected to kick off 15 days earlier this year. This could have a negative impact on the top fruit market.

France: Consumption lagging behind
According to various traders, the French market is saturated. This is happening despite the fact that the volumes in France are smaller than usual. The shelf life of the pears suffered from the hot summer, which caused a considerable share of the production to become unsuitable for export. Because of this, many importers prefer to get their products in other countries. Domestic consumption is also disappointing, and the French market is struggling to absorb the volumes available. In fact, there is still a lot of Conference in storage. The prices are low.

Germany: Overseas pear season officially started
Italy is still well represented on the German wholesale markets with the Abate Fetel and Santa Maria. Dutch, Belgian and even German pears are also traded smoothly within the wholesale trade. The Doyenné du Comice from France and the Turkish Santa Maria complete the European supply.

Moreover, the overseas top fruit season has also started in full force. The Rosemarie and Williams Christ, in particular, are imported from South Africa, although their quality has been a little unsatisfactory, according to the trader. The season has also gradually started in South America. The Argentinian season has kicked off with the Williams Christ and Red Bartlett. An importer confirms the steady rise of organic pears from the Argentinian Patagonia. In line with this trend, the demand for Demeter pears is also increasing, opening up new opportunities for specialized importers.

Australia: Exports grew by 75%
The Australian pear season peaks in the fall. Both Williams and Nashi pears are of good quality and are sold at satisfactory prices. In the Sydney Markets, the fruit is sold for $ 2- $ 6 per kilo.

Figures recently published by Hort Innovation show that the production volumes have grown by 7% between July 2017 and June 2018. The total production amounted to 115,929 tons; however, the total value of the harvest has fallen by 19% ($ 23.9 million) compared to the previous two years and dropped to $ 99 million. The export volumes have grown by 75% and amounted to 12,467 tons. This resulted in a 60% increase in the total value of exports, which stands at $ 19.6 million. The most important export market was New Zealand (20%), followed by Indonesia (19%). A total of 1,826 tons of pears were imported.

The Packham is the most widely grown variety, with 63% of the total, followed by the Williams (20%) and the Beurre Bosc (10%). 88% of the volumes were grown in the state of Victoria.

US: Falling demand from the processing industry
While the season is almost coming to an end, a lot of North American pears are still available. "This is partly due to the closure of a large factory in California, which has caused the demand from the processing industry to fall," says a trader. “As a result, many Bartlett pears intended for the industry have ended up on the fresh market. The quality of these pears leaves a bit to be desired. There are still some factories that demand pears, but not many. ”The market for the D’Anjou and Bosc pears is good, says another trader. The domestic supply of D'Anjou pears should remain at the same level during the spring. In the summer, the market will switch to exports. Prices are especially high for good quality pears are lower for the lesser quality ones. Those prices are expected to improve as the season progresses. Oregon is likely to be able to continue supplying pears until the next harvest, while stocks in Washington will run out in June. After this, the domestic volumes will be extremely small.

China: Pears still available despite frost
At present, there are still Chinese pears available on the Chinese market, despite the fact that the production was reduced due to the heavy frost recorded in April 2018. In order to meet the demand on the domestic market, pear traders have been exporting a little less and selling more on the domestic market. Since the demand is so high and the supply is smaller, the price is very high this year. Furthermore, many pears are imported. Belgium and the Netherlands are important suppliers. What things will be like for pears in the next season remains to be seen. The trees will start blossoming in late March and early April. The rest of the new season will be determined by how that goes.

South Africa: Exporters try to avoid Europe
South African pear exporters have, generally speaking, one strategy in mind at the moment and that is to avoid the European market where Conference pears and the previous season's Italian Abate Fetel pears are still on the market. Europe has been very difficult terrain, says a producer, with a very bumpy transition between European and Southern Hemisphere fruit. Receivers in Europe have notified exporters to hang on their pears a bit longer and some exporters are looking to alternative markets.

Other markets are Canada, the Middle East, Russia, India and the Far East (with the exception of China - the industry has been long awaiting the opening of the Chinese market for South African pears).

Prices in Europe are under pressure, but that's not the only subdued market. In the Middle East, traders complain, there's no purchase power, due to an extent to regional politics, but the Middle East remains an important receiver.

Overall, a pear trader says, fruit is moving but "there are no golden opportunities".

The first Forelle shipments (part of the Forelle Early Market Access, FEMA, programme) are on the water. The crop, of which about 5% still needs to be harvested, has good volume and sizing.

The heat wave that fruit growers experienced in October last year had more of an impact on pears than the drought of the previous three years, says a pear producer. The heat wave seriously knocked fruit set on specifically Packhams pears, with very cold temperatures immediately afterwards, and therefore Packham volumes are significantly lower.

Forelle was not impacted by the heatwave.