SHIFEX, Shifl’s container spot freight rate index, points to an ongoing decline in spot rates that is set to shift the power marginally away from
the carriers.

Shifl’s data shows the shipping rate for a 40’ container from China to the U.S. West Coast is set to fall below $5,000 for the first time since the spike caused by the pandemic. Shipping a 40’ container from China to Los Angeles and Long Beach will now cost, on average, about $4,900 in September 2022, which is a 72 percent decline Y-O-Y from a high of USD17,500 in September 2021.

“While spot rates continue to decline, they are still more than three times higher than they were prior to the pandemic,” said Shabsie Levy, CEO, and founder of Shifl.

On the all-water route from China to New York, the year-on-year decline was also significant but less drastic compared to the West Coast, with 40’ container rates set to drop 54 percent to an average of $8,900 compared to $19,500 in September 2021.

Lines like Maersk and ONE both reported a decline in volumes in the second quarter as they have focused on their multi-year contracts business. Accounting for 70 percent of their container moves, these contracts are now driving revenue increases of over 60 percent year on year. 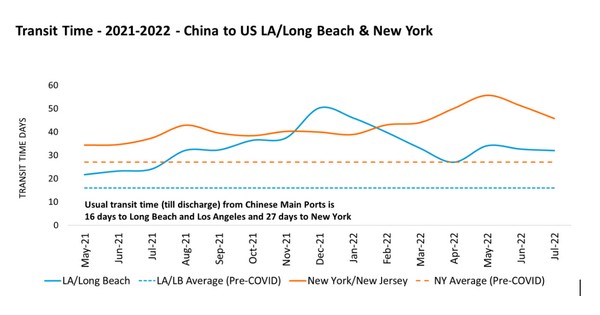 Lines servicing the U.S. trades have been able to improve transit times in the last three months, with notable improvements in particular on the route between China and the U.S. West Coast.

Transit times on the Trans-Pacific trade, especially East Coast, have been impacted since the start of the year due to the decision by shippers to reroute shipments to the East Coast to avoid long delays on the West Coast. 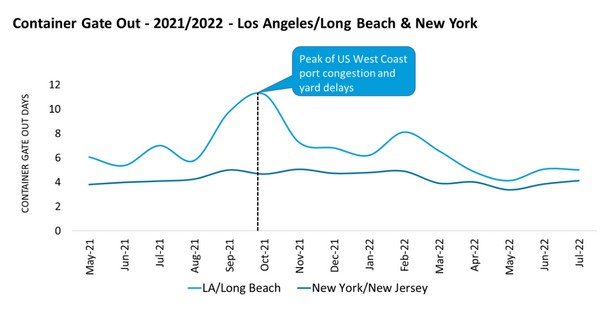 Ships calling to the U.S. East Coast have been relatively less impacted by the congestion issues that have been felt over the past two years, as it is currently taking 1.7 times more time to sail from China to New York time when compared to sailing times pre-pandemic.

Currently, there is a build-up of empty containers in the U.S., which has put pressure on some ports for space and chassis being used as storage facilities. To avoid a build-up of empties caused by the imbalance in trade between China and the U.S., ports like New York and New Jersey will implement a quarterly container imbalance fee on September 1. The charge intends to target ocean carriers who have excess empty containers stored for long periods.