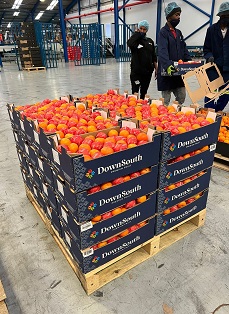 Down South, based in Stellenbosch, has exported mostly citrus, with a balance of apples, pears and grapes, from South Africa since 1997.

From their growers in Limpopo and the Gamtoos Valley in the Eastern Cape, they’re sending Valencias (MidKnights and Cambrias) (right) to many markets, from Canada and the Middle East to South East Asia (Bangladesh and Malaysia) and the Far East.

Last year the Valencia season ran very late because of shipping delays. “We hope it’s not like that again this year. We’d like to finish in the first or second week of October,” he remarks. 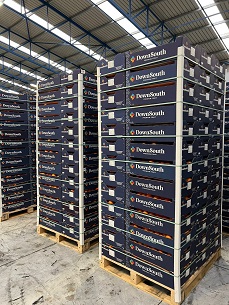 “India is a very competitive market when compared with other markets,” notes Frederick Ferreira, managing director at Down South, despite high import tariffs on imported oranges.

“We’ve had a few conversations with buyers in India and they’re very enthusiastic to effect good growth in exports from South Africa. We expect strong growth every year for the near future. I think it is a market that will probably show the most growth of all the markets where we’re currently busy.”

Their late mandarins (Tangos and Nadorcotts) go mostly to their UK programmes and the Far East (China, Malaysia) as well as to Mauritius and Canada. Russia was a good market for Novas, with the last shipments underway. 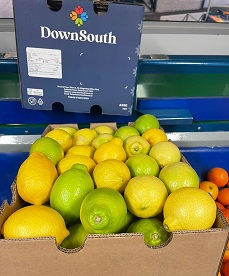 Their lemon exports to Europe are finishing now, and the company is continuing with retail programmes in the UK, Canada, Malaysia and the Middle East.

Already there have been space constraints to sterilize fruit to the Far East, and the extra strain put on capacity this year by the new European protocol on oranges will cause additional congestion and delays in Durban and Port Elizabeth, Frederick says.

A few years ago one of their citrus producers in Patensie erected sterilization chambers, specifically for exports to China, where they will this season be able to precool the fruit for Europe as well.

The last of Down South's Novas; late mandarins have now started (photos supplied by Down South)

“From sorting, all the way to cooling - we can do it all under one roof,” SP points out. “This way we ensure premium quality product for all our clients.”

“We follow a conservative approach,” he observes. “In times like these it’s important to remain realistic. You have to ensure that products have the required payment security – that is something we are focusing on, to keep it in control.”