In the Netherlands, this year's apple harvest should be similar to last year's. Somewhat more pears will be picked than in 2021 when the harvest was disappointing. Growers will harvest an estimated 245 million kg of apples and 368 million kgs of pears. That is what GroentenFruit Huis and the Netherlands Fruit Growers Organization's information, gathered by the crop estimates working group, shows. 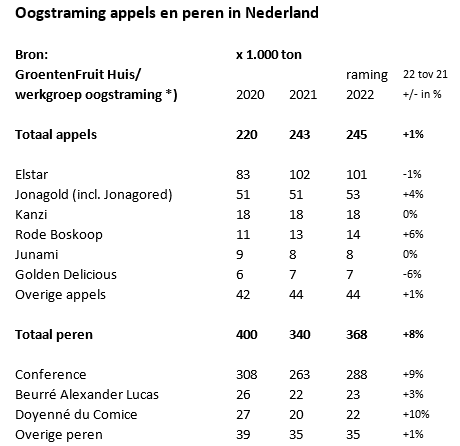 *) these parties are represented in the crop estimate working group:
- the Netherlands Fruit Growers Organization (NFO)
- GroentenFruit Huis
- the Dutch Central Bureau of Statistics (CBS)
Delphy advises the group, which gathers data from companies throughout the Netherlands.

This year, Dutch apples are grown on 5,926 hectares. That is a fraction less (-1%) than last year. That brings the recent years' sharp decline to an end. The total 2022 apple harvest will be almost as large as in 2021. With a 40% share, Elstar is by far the most cultivated apple in the Netherlands. This year, 101 million kg of these apples are expected, comparable to last year. For the second-largest Dutch variety - Jonagold (incl. Jonagored) - 53 million kilos are expected.


The CBS registered pear trees on 10,131 hectares - almost as much as in 2021 - of Dutch soil. The Conference crop makes up three-quarters of the Dutch pear harvest and is estimated at 288 million kg. That is nine percent more than last year, when it was low. Beurré Alexander Lucas and Doyenné du Comice followed, at a distance, with 23 million and 22 million kilos, respectively.

The new apple and pears harvests will be available from late August. Then consumers can, once again, fully enjoy the tasty new, high-quality fruit, which is also sustainably grown with a low CO2 footprint.

The Netherlands Fruit Growers Organisation (NFO) is the organization for and of professional Dutch fruit growers. It represents fruit cultivation companies' interests.

GroentenFruit Huis is the interest group for grower associations and trading companies' fruit and vegetable sales.