Chile has nearly 1,500 hectares that present problems of salinity and a high presence of carbonates, mainly due to the arid conditions of the central and northern area of the country, accentuated by agricultural practices such as irrigation with water with high salt content and inadequate fertilization, among other factors.

Given these conditions, solutions are currently required to help mitigate the effects of salinity and drought on crops. A group of researchers from INIA La Cruz, the University of Chile, and the Arturo Prat University, which are part of the Conicyt "PASSA" Science and Technology Research Ring project (Act 192073), are developing different strategies through different formulations to increase the tolerance of tomatoes to lack of water or salinity, which could save water in this crop so that producers can continue harvesting it in lands that are currently affected by this type of abiotic stress. 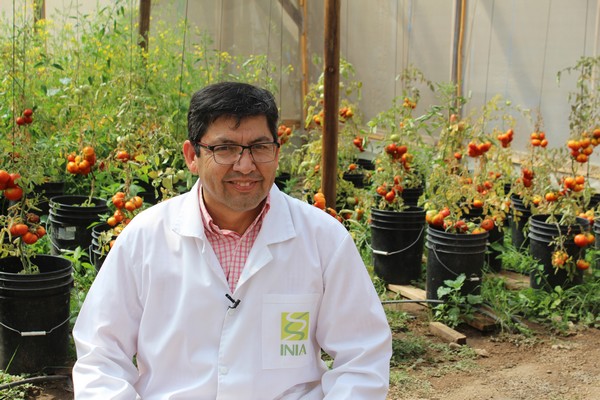 What are these formulations?
The so-called "biomodulator" will incorporate a series of natural compounds, especially lipoic acid and carotenoids, which have antioxidant properties. In addition, chemical molecules will be added that have shown promising results in previous research carried out at the University of Chile.

Researchers are also developing another formulation that will contain rhizobacteria obtained from plants that grow in the Atacama Desert and, according to previous research developed by the Arturo Prat University, confer resistance to salinity, allowing them to live in environments as adverse to fauna as this one.

In parallel, INIA La Cruz is working with plant growth promoters from native rhizobacteria obtained from the INIA Microorganism Bank, where experiments have shown that applying them to tomatoes under greenhouse conditions favors growth in salinity.

The trials were evaluated in two tomato varieties: one commercial variety (undetermined hybrid tomato) and the other, a local variety, Poncho Negro, typical of the Yuta Valley, Azapa, in the region of Arica and Parinacota, which is grown in the northern area of Chile. The trial has a control group and another group where researchers add more salt to the crops to generate stress.

"In another year, we'll have more accurate information about this initiative, and a formulation will be available for the farmer to use," INIA stated.