Cherry orchards have been stable all over the world for a few years. Nonetheless, the "geography" of cherries is changing. FreshPlaza has talked about it with Desmond O'Rourke from US company Belrose, which analyzes the global fruit market.

The current cherry market scenarios show how the countries that invested the most in exports are those that are now increasing their production. "The demand for sweet cherries has grown very slowly in most traditional markets. Domestic production exploded in China, as did imports. The glaring example was the growth in Chinese imports and Chilean exports. Total Chinese cherry imports exceeded 20,000 tons for the first time in 2008. In 2020, they exceeded 210,000 tons. Chinese imports from Chile were less than 3,000 tons in 2008, while they were almost 195,000 tons in 2020." 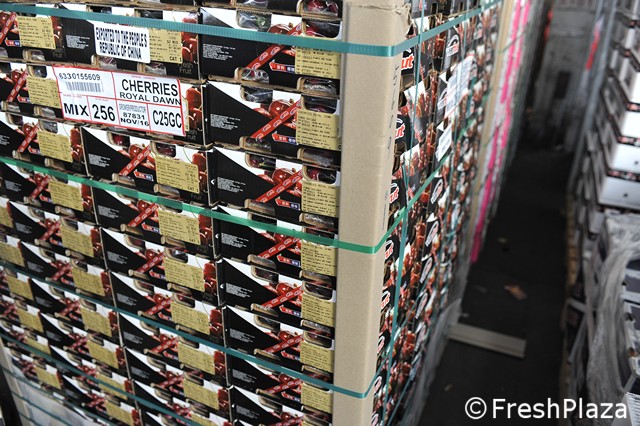 "Exported for the people of the Chinese Republic," reads a label on a pallet of Chilean cherries in the Shanghai market (photo by Riciputi, 24/11/2017)

Fruit quality, post-harvesting technologies, product and process brand policies - some of these aspects are very important to become leaders on the global cherry market. "Modern consumers are increasingly willing to pay more for larger fruits and eat cherries for a longer period of time. Progress in the sorting of sweet cherries and cultivation practices increased the availability of larger and late-season fruit. For example, in the US, the share of larger cherries went from 44.3% in 2006 to the 80.2% in 2021."