Ample table grapes incoming for the rest of 2021

Grapes will be in healthy supply for the coming months.

California production of grapes continues. “There’s still a fair amount of fruit hanging and the majority is covered in plastic. October-November is a fairly rainy period for the San Joaquin Valley,” says Ira Greenstein of Direct Source Marketing in Mount Kisco, New York. “California should have a normal finish and there should still be plenty of fruit in December.”

That said, while cold storages show similar amounts of fruit to this time last year, late-season red grapes could be lighter in volume than expected. “There will always be plenty of red grapes in December though this year there will be an overall lower volume of red grapes that month,” says Greenstein.

Quality concerns?
Given the challenges California has seen throughout its growing season--notably, the summer heat waves--the question for California may be how good is the fruit still going to be? “With the extreme heat and lack of water in some areas, the storability of this year’s crop is more the question rather than the volumes being put away. If the fruit isn’t holding up in long-term storage, then we’re going to come up short on quality fruit,” says Greenstein. 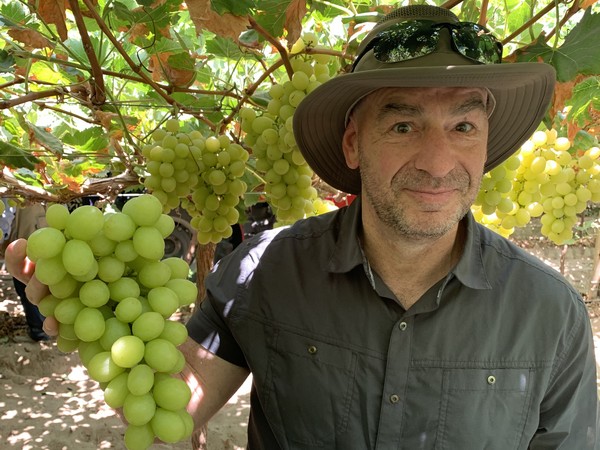 At the same time, demand is average currently thanks to a few variables impacting retail movement. One of the most significant factors is the stress retail operations are under right now in store and the warehouses given the general lack of labor. That means retailers aren’t always inclined to welcome promotions to move greater volumes of fruit--a phenomenon not restricted to grapes alone. “Why stress operations to do double the volume at lower retail when they could retail it higher, take less fruit into the system for less stress on the operations and do well in the margins?” says Greenstein.

That said, current grape pricing has stabilized compared to a month ago when inventories were building. “We’ve seen the price tick higher on red seedless grapes in California and green seedless pricing pick up for better quality fruit. But there’s still no shortage. You can still buy what you need at a fair price,” says Greenstein.

Eyes on imports
Looking ahead at the import season, Greenstein says Direct Source is already working towards having imported fruit earlier here this year. “We’ll have Brazilian green seedless here as early as the third week of November,” he says. Brazil’s crop overall though looks to be status quo. “I don’t see a huge increase coming from Brazil because we haven’t seen a substantial increase in plantings there for the past five to seven years.”

Peru is a different story. Harvest has already begun there and better volumes should arrive by the middle of December. “The U.S. is still the market of choice for Peru and they’re projected to have a crop of more than 60 million boxes this year--another 10 percent increase from last year,” says Greenstein. The other significant market for Peruvian fruit is Asia, though given the logistics issues being seen globally and reports that fruit could see delays of 40-60 days, shipping fruit to the U.S. could possibly be more attractive to Peruvian growers. “However they’re used to seeing excellent returns over the last 10 years and they may need to adjust to the fact that we have to promote fruit and that the FOB returns this year may not be so profitable,” says Greenstein.

And while Chilean grape arrivals should land here just before Christmas, overall the crop remains a bit of a question mark. “There are a lot of growers last year who suffered financially and we’re not certain how they’re going to manage getting their crop into the market this year,” says Greenstein.

Retailer’s choice
All of this leaves retailers with choices this fall. “If you’re west of the Mississippi, there should be California fruit available for you to purchase. If you’re east of the Mississippi and you’re having issues with quality arrivals from California, you may need to switch to imports,” says Greenstein.

And then there’s the logistics factor that looms over the grape industry. To control its logistics, Direct Source began Direct Source Logistics five months ago and to date has more than 200 contract carrier relationships. “This year, everyone’s going to have fruit to sell. But the question may be: who can actually deliver it, on time and when your customer wants it. That’s the real challenge,” says Greenstein.

In general, it looks though as though there may be an oversupply of grapes in the market. “There still needs to be a reduction in the California crop for growers to be profitable. Peru continues to increase its volumes. Other markets like Brazil are taking advantage of certain windows in the U.S.,” says Greenstein. “At the end of the day, there will be plenty of fruit to sell.”