The global melon market has been up and down in many countries this season. The COVID-19 pandemic continues to affect sales, as many catering companies are not back at pre-pandemic operating levels across the globe, affecting demand from this sector. Logistic issues also continue to affect imports in some countries, driving prices up and leading to the cancellation of some programmes, as has been seen in China, which only started importing Brazilian melons in 2020. The weather in countries in Europe also led to a lack of interest in melons, as they are traditionally a summer treat for many consumers, to be eaten on sunny days. 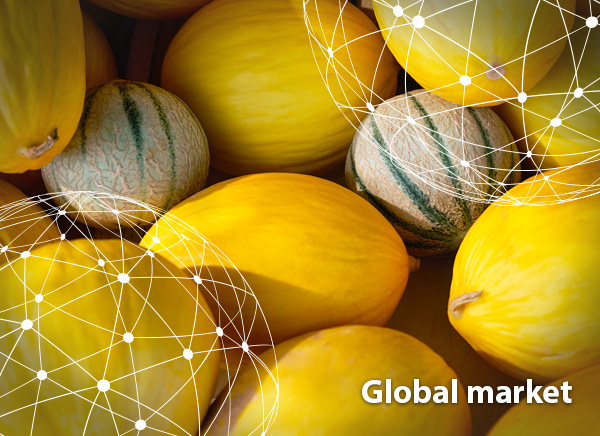 Netherlands: Brazilian melons back at square one after a good start
The Brazilian melon season got off to a flying start this year. Importers even speak of the best start of the past decade. "Due to delays, there was no good connection between the overseas and the Spanish season and these shortages led to a sharp price rise. Now, however, prices are rapidly returning to their former levels," says a Dutch importer. "I had expected that, because of the increased costs of sea freight and cardboard, among other things, that fewer Brazilian melons would be sent to Europe, but we see that the supply is at a similar level as in previous years. The prices are still at a reasonable level, but the best levels are gone."

Germany: Demand is still there, but interest declining
Although the melon season is drawing to a close, there is still a certain amount of interest from food retailers. A big wholesaler from the Southern Germany has Italian autumn melons on offer, including Galia and honeydew melons, but also watermelons from Brazil. The demand was relatively weak this year, which partially due to the weather. Sales have been difficult since August. There is also strong competition coming from Turkish suppliers, who offer watermelons at much lower prices.

The wholesaler says that melons are not that relevant for restaurants per se, only during the summer months. However, they are still interesting for the food retail trade. Usually cafeterias are also more interested in melons, but because of the home office work, there has not been much demand. His focus is on net, honey, water and galia melons. The demand for sugar melons is slightly increasing.

Generally speaking, there is still some demand, but the interest is declining. Food retailers are now focusing more on clementines. The products are obtained from Spain and Italy. This year he briefly offered watermelons from Germany, but most of the time, these products are sold directly by the growers themselves.

The prices are reasonably stable.

Italy: Watermelons and melons rarely purchased online in Italy
According to GfK Consumer Panel data, in Italy out 100 families who have bought melons or watermelons at least once in the last year, 59.3% bought both types (up from 55.6% two years ago), 26.1% bought only melons and the remaining 14.7% bought only watermelons. In the last year ending in August 2021, there has been a 9% growth in watermelon purchases. Unlike other categories, where organic has seen fast growth and usually contributes to the overall growth, in watermelons the Italian families who have purchased organic varieties total only 2 million and are rather stable, compared to last year. There is therefore a potential for growth in this category. With regard to the purchasing channels, only 2.6% of Italian families buy watermelons online, with a considerable potential for further developments. In the melons category, the development of organic variants appears to be good, with 2.7 million Italian families having purchased them (+19.4% compared to two years ago). At the moment, only 4.2% of melons purchases in Italy are made online. For both categories, the average age of the average buyers is quite high.

A wholesaler from the north of Italy says that the watermelon and melon market has always been in chiaroscuro (highly contrasted) throughout the summer of 2021. On October 18, they received the last batches of yellow melons from a producer in Puglia and sold them at 40/50 cents per kg. Over the next few days, he will receive the yellow melons from Sicily and the selling price will be more or less the same. Melon and watermelon production was strong in the whole summer of 2021, in all Italian production areas. For watermelons, for example, prices were generally low, because supplies were always continuous, with supply exceeding demand. Only a few categories, for example particularly good mini-watermelons or those with a recognizable brands have achieved better results. Only now, at the end of the 2021 season, with stocks only predicted to last for a few more days, watermelons are receiving higher prices.

Spain: Tough season for Spanish melons and watermelons
A difficult Spanish melon and watermelon campaign ended in the latest region, Castilla- La Mancha ,around two weeks ago, with low prices for melons and disastrous prices for watermelons due to the increase of the acreage and lack of exports. Last year, the region achieved a record exporting 40% of its watermelons while this year only half of it was exported, mainly because of the cold and rainy weather in Europe.

According to a trader, Piel de Sapo melon prices have been good in general for growers, but prices paid on the markets (mostly Spain, followed by Portugal and Italy) led traders to have tight margins or even losses in some cases. Premium brands were still able to hold better prices but the standard brands suffered the most.

Around 3 weeks ago the first shipments from Brazil arrived to the Spanish markets. The rains in Castilla-La Mancha affected the quality of the last melons and watermelons, which made some importers start a bit earlier this year. The prices are not as high now and the weather stays warm in Spain, which is bringing a good demand at the moment. Nevertheless, importers are facing big difficulties with the logistics due to the lack of ships and massive delays. “Shipping companies are breaking their deals and it’s quite difficult to plan supply programs with the supermarkets. It’s going to be a very difficult season for imports”, states a melon and watermelon trader.

South Africa: Effects of disease and pandemic hamper melon production and sales
Melons are currently harvested in the far north of Limpopo Province, running through until May next year. Melons are planted from August into February for year-round production. Interestingly, in autumn and winter Limpopo melon growers plant cultivars that in summer would produce fruits that are too large, but when grown through winter reach just the right size for the bridging periods of the season. South African consumers generally choose watermelons over melons.

In the Eastern Cape melons are planted from August into December; cropping from December until end of March. In the Western Cape melons grown for the later slot in April does very well but this is a period when growers (because nobody grows exclusively melons) have their hands full with table grapes.

The impact of COVID on the restaurant, hospitality and tourism sector on melons has been "enormous” a Limpopo melon grower says.

Domestic consumption of melons is on a decline and some growers say they’ve over the years reduced the area planted with melons, but the fruit has the advantage that it is able to withstand the extreme heat and sun intensity in the far north of Limpopo.

A concern for local melon growers in the northeast of the country is a recent arrival in South Africa, a virus that causes yellowing and stunting, “a terrible disease”, says a grower. Over the past three years, cucurbit yellow stunting disorder virus has been getting worse in the north of the country and a number of growers have lost their entire crops to it. It devastates watermelons; its effect on melons is reportedly less severe but requires careful management. A Cucurbita specialist at a seed company says pressure from this disease (transmitted by white fly) has been acute over the past two years and it appears to be spreading. Some farmers have removed all plants in this family from their farms for long periods to break the cycle.

Growers in the Eastern Cape, however, say they remain relatively unaffected.

The Piel de Sapo cultivar, not well-known domestically, is grown in the Eastern Cape; it didn’t fare well in the north of South Africa, says one grower.

According to the Johannesburg municipal market, the average price for musk melons is R16.47 (0.977 euro) per kg.

China: Poor melon sales lead importers to suspend plans for Brazilian melons
Brazilian melons were allowed to be exported to China for the first time in 2020. Brazilian melons are not familiar to Chinese consumers, and the price is up to 200 RMB/per melon in the market, 4-5 times higher compared with domestic ones and not competitive on taste. This lead to many importers suspended their import plans this season after a short test.

In recent months, the sales of domestic melons have not been very good. The beginning of the Xinjiang melon production season in August is the best time for the market to sell goods. At that time, the weather was hot, and consumers had a great demand for honeydew melons. Currently Xinjiang melons are coming to an end, melons from southern origins have not yet been marketed in large quantities, and only a few melons are on the market. The Kimberley Chiba from Inner Mongolia production region is currently available in the market, the price is 29 RMB /piece (about 500g).

North America: Supplies of melons in North America look to be steady
Volumes of organic seedless and mini watermelons out of Nogales are good and should remain that way through U.S. Thanksgiving is next month. The supplies are about the same as last year or slightly less,” says one grower-shipper. “California has wrapped up its melon program or they have very little left at least.”

Meanwhile supplies of organic and conventional cantaloupe and organic and conventional honeydew melons have begun production out of Mexico. “It’s been a little cooler in the northern Mexico region so the harvest has been pushed off for a little bit. For us, it’s starting about a week to two weeks later than normal,” says the grower-shipper. They add that both types of melons will have about the same to slightly less production compared to last year. “Last year’s markets with melons were a bit challenging during this time so I think people pulled back somewhat.” Domestically, Arizona has also started production on conventional cantaloupes.

As for demand, it’s good for now on melons. As it gets cooler in the buying regions, melon demand starts to slow down. But demand, especially in some of the warmer climates around the country for the winter, does continue to pull melons consistently. We’ll see consistent demand through the fall, says the grower shipper.

As for pricing on the organic melons, it is average currently. “It’s a little higher than last year--the markets have been good. But I see pricing leveled out so I think it will stay where it is,” the grower-shipper adds.