Many mango growers have seen reduced volumes as poor weather conditions continue to wreak havoc in some production countries, such as Italy, Spain and Egypt, driving up prices, whilst China has the opposite problem in some areas, with key varieties seeing overproduction. Despite this, hopes for good quality and even better demand remain high across the board, and many growers and exporters expect to receive good prices for their mangos in their target markets. 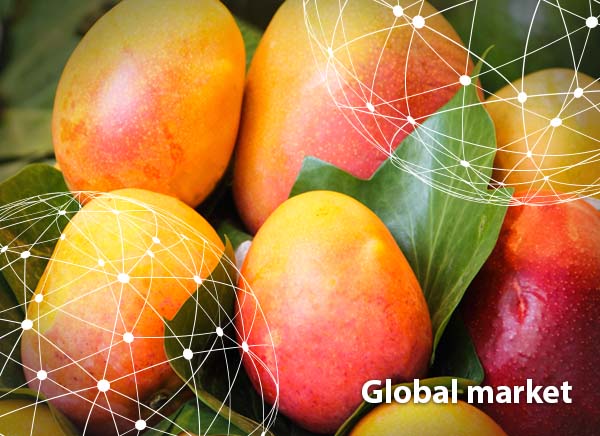 The Netherlands: Mango market revives after difficult month in August
According to a Dutch importer, the month of August was not a great month for the mango market. "You see, every mango year is different. Last year we had shortages in August because the Senegal season didn’t start, but this year we had sufficient supply from all sides. This led to a catastrophic Senegal season for growers and importers. We are still feeling the aftermath, but there seems to be a turnaround now. Partly due to delays in the Brazilian supply, the market has been cleaned up. Israel does not have much product yet and the first Spanish Osteen mangoes are arriving on the market, but they are at a completely different level than the overseas mangoes, which makes them not really competitive. With that, prices are slowly coming out of a dip. The 5 euro mark was not in the picture for weeks, but is now a good indication for the big sizes. Small sizes are hard to come by."

Germany: Focus on organic mangos from Spain
The season for mangos from Senegal and Peru has ended. One company has also offered Kipepeo mangos from Thailand and a small amount of mangos from Mexico for a short amount of time. Several companies in Germany are now focusing on organic mangos from Spain with different varieties like Osteen and Kent. Many customers are more willing to pay higher prices for organic mangos with good quality. Market prices are somewhere between 12 to 15 euros per kilo. One company from Bavaria claimed that this year the demand for mangos has worsened, because of the fact that last year's consumption at home was a bigger factor than this year. However, another company from Lower Saxony said that it almost doubled its amount of customers compared to last year.

Italy: Lower yield for Italian grown mangoes and lower prices for imports to Italy this season
In Sicily, a producer growing mangoes on 4.5 hectares reports a lower yield this year (due to unfavourable weather in December 2020 and February 2021), but with very good quality. "We have just started harvesting for our partners on contract. Initial prices show a 20% increase compared to last season. The direct competition is from Spain, which started before us in the 2021 campaign."

A wholesaler from Milan said the season for the product imported from Mexico by air ended averagely, echoing the previous Peruvian campaign. "There were not very many upward peaks and not very many downward peaks either. There was more movement in the last weeks of sales. Currently, there is also Israeli mango on the Italian markets, which is a couple of weeks early. The varieties are Maya, Aya, Kasturi, Kent, but there isn’t the large volumes or quality similar to other countries. Between September and October, depending on the production areas, the season of the mango Kent from Brazil should start too.” The wholesaler points out that a lot of Spanish Osteen mangoes are arriving, with purchase prices trending downwards (from €2.30 last week to €1.80 now). "These are excellent fruits, which arrive on Italian markets by road transport and are also cheaper compared to products imported from other sources by air." The Sicilian mango campaign will also begin shortly.

Turmoil is predicted, but prices will tend to fall due to the large volumes expected. "Spanish mangoes will weigh in the balance. If the quantities are large, people will be inclined to buy this product and not those imported by air, with the exception of contracts that have already been signed, for example, with retailers. The Spanish Osteen mango also benefits from the different formats, that is pre-ripened, ripe, green, in 10 kg crates, in sizes that range from 800 to 200-grams, to name a few. The Egyptian mango campaign is also kicking off. "It is a good fruit, but unfortunately not processed well. However, it has an acceptable price and for the foreign ethnic groups present in Italy, it is a mango that works."

A final note on Brazilian mangoes arriving by sea. "Price levels are very low. We are talking about less than €4.00 for varieties such as Keitt, Palmer, and Tommy. Prices will suffer even more with the arrival of the Spanish mango," concluded the wholesaler.

Spain: Positive start to Spanish mango season, with good quality and sizes expected
The Spanish mango campaign has started in Axarquia, in Malaga, which has around 3,000 hectares devoted to the crop. The first Tommy Atkins mangoes started last week in the earliest farms and this week the first Osteen mangoes of the season have been harvested, as they have already reached the optimum Brix levels. The campaign will start to gain momentum and full volumes at the end of week 36, from September 8-10. The first sales show that the market is very interested in Spanish mangoes. In addition, growers claim there is very good quality, higher than last year, with very good color and larger sizes than in previous years.

This season, as in the previous two years, the full mango producing potential, which is close to 60,000 tons, will not be reached. There are a number of factors determining these yields, including crop management and the changing weather conditions, which are undeniably affecting the development of the production; however, there is also the problem of the lack of water resources in the Axarquia region.

The mangoes produced in Malaga arrive on the market at a time when Senegal is just concluding its campaign, although they will share space with the Brazilian mangoes in the shelves. Brazilian mangoes are selling for 3-4 euros a box. That is a price Spanish mangoes cannot compete with, but their advantage over Brazil is their proximity (within Europe) and their tree-ripened quality.

According to an exporter, this year the prices at the beginning of the mango season are more moderate and are below the references of the last two years.

Egypt: 30% reduction in Egyptian mango production
There’s still a few more months left in the Egyptian mango season, but the year has brought significant challenges. The hot weather resulted in 30% less production this year, despite Egypt’s goal to increase production of mangoes every year. Demand for Egyptian mangoes has been solid, but the lower harvest has resulted in a price increase. Thanks to the good demand a lot of mangoes have been sent to Europe, Russia, and the Gulf countries.

The first mangoes of the local season will start coming in from Mozambique in November. The mango season peak coincides with the Christmas holidays in this part of the world; there’s not much demand for it during winter.

With regards to the South African growing season, it has been a cold winter and mango flowering was late, by around a month. Although this may seem like a significant delay, the fact that the flowering has been late is not necessarily a problem, as the plants flower over a long period, and it doesn’t automatically follow that the crop will start later than usual.

The full crop estimate will be ready towards the end of October.

North America: Stronger pricing on mangos in NA currently
The supplies of mangos coming into North America currently are steady. Shipments into North America are ramping up for the start of the Brazil harvest as it transitions from Mexico’s season. “The size curve in Mexico is historically skewed towards jumbo mangoes while Brazil typically has regular sizing. Quality remains high and supply is steady,” says one mango shipper.

Currently from Brazil, the Keitt, Tommy Atkins, and Palmer varieties of mangos are also moving and preparations are ongoing for the South American season which will supply Honey, Kent and Keitt varieties of mangoes. Good volume and high quality is anticipated to continue from Brazil.

Demand is strong for mangos, particularly from the Southern region and the West Coast. Historically, consumption increases every year. Consumers continue to learn more about the flavor and health benefits of mangoes as growers and shippers work on ripening programs to supply high-quality fruit and a good eating experience.

As for pricing, industry pricing on mangoes is higher this year than last year. Prices have increased week over week for the last three weeks.

What remains a challenge though for mangoes, and many other commodities, are global supply chain issues. An industry-wide global logistic challenge is the lack of availability of containers in South America, causing inevitable delays across all commodities. Shippers are also continuing to address and adapt to evolving situations and restrictions caused by the pandemic.

Looking ahead, the Peruvian mango season is anticipated to start in approximately three months.

China: Popular Guiqi mango faces low prices due to high volumes
In China, the Guiqi mango has been a very hot selling variety in recent years, with its peak season in July and August. However, this popular variety has suffered a low price this season. The price in the production area dropped to 4 yuan/kg, much lower than previous years. The main reason is because the production volume is increasing rapidly, and this year the yield is quite large, making the market supply larger than the demand. As well as this, some farmers pick the fruit around 1 month earlier from the tree, meaning the quality of fruits in the market was not even, which affected the consumer’s buying confidence.

Currently the Sichuan Kate mango is in still in the market. The production of the Kate mango is good this season. The price is around 25 yuan/kg in retail stores.

Australia: New mango hybrids for Australian growers
The Australian mango season is in its ninth week, with 44,000 trays sent to market from the Darwin region for the week ending August 27, according to the national forecast. Volumes are predicted to grow, until they peak in mid-October, with the season running until mid-December. It has been reported that Darwin's Kensington Pride (KP) varieties are looking patchy across the region - with some orchards expecting a heavy crop while others are expecting lower volumes compared to previous seasons. Calypso harvests are expected to start in mid-September and some orchards volumes are expected to be higher than last year, with a lot of fruit on the trees, but fruit size is expected to be smaller. The Katherine and Kununurra production regions are expected to start forecasting for their harvests from next week.

Meanwhile, it has been announced that three mango hybrids produced during the National Mango Breeding Program will transition to the next phase of their commercial development in the coming months. The varieties, currently known as NMBP-1201, NMBP-4069 and NMBP-1243, are protected by Plant Breeders Rights, granted through IP Australia, and are currently grown by over twenty growers on orchards in Western Australia, the Northern Territory, Queensland and New South Wales.