Included in that was a high-value B.C. crop: cherries. “Mainly what I’ve seen is the outside rows of farms that were exposed to more heat than the rest of the trees in the orchard--that’s where the majority of the damage is,” says Sukhpaul Bal, president of the B.C. Cherry Association based in Kelowna, B.C. “We were unsure how far that damage was going to extend. That was our big worry.”

Better than expected
However, today, B.C. growers are feeling more optimistic after a deeper look into their orchards post-heat wave. “When we got back out into the orchard, we saw there was still some excellent fruit. It really changed our perspective. We expected the worst, but with the good fruit set this year, there were lots of cherries on the trees to begin with,” says Bal, noting the 2021 crop had been one of the strongest crops in years. 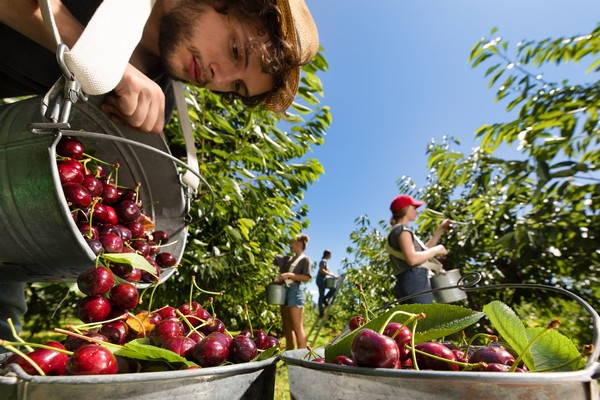 Why did some cherries make it out okay? Bal points to leaf coverage on the trees. “In certain clusters you’ll see that some cherries were exposed to the sun or bunches of fruit that didn’t get covered,” he says. “The fruit that was exposed to the constant heat took the brunt of it and the cherries inside were sheltered and could still be viable. Once you get into the canopy, there’s some beautiful fruit shaded from these extreme temperatures.”

This includes the Lapins variety which growers have just begun harvesting and Bal notes they’ll soon pick Kordia, Skeena, Sweetheart and then later in the season Staccato and Sentennial cherry varieties. “In general there’s still a very nice crop, especially in the Northern part of the Okanagan Valley,” he says, adding some of the later varieties in the South Okanagan will also be ready in the coming weeks. In all, harvest should wrap up between August 15-20th though some higher elevation farms may go until late August or even early September.

Future outlook
Looking further ahead, B.C. growers have learned over the course of the last two years that extreme weather events are the new reality. “The extreme heat caught us off guard because we weren’t expecting it to get that hot. Now that we know that it is possible, growers will adapt and adjust their orchard management practices,” says Bal. “It’s what growers have done for generations--they come across a challenge and look at how to solve the problem.”