According to the most recent Household Affordability Index - by the Pietermaritzburg Economic Justice & Dignity group (PMBEJD) - while food prices have dropped slightly in June, shopping baskets are way more expensive to fill than last year, outpacing inflation by some margin.

The civil society initiative found that its household food basket saw a marginal drop in price month-on-month – but remains at much higher levels than September 2020, when the basket was first compiled.

The basket comprises 44 core food items most frequently purchased by lower-income households who make up the majority of households in the country. It was tracked at R8.88 (0.2%) cheaper than a month ago (April) at R4,128.23. However, over the past 10 months, the cost of the average basket price increased by 7.1% or R271.90. Inflation over the same period was much lower, tracking between 3% and 5%. 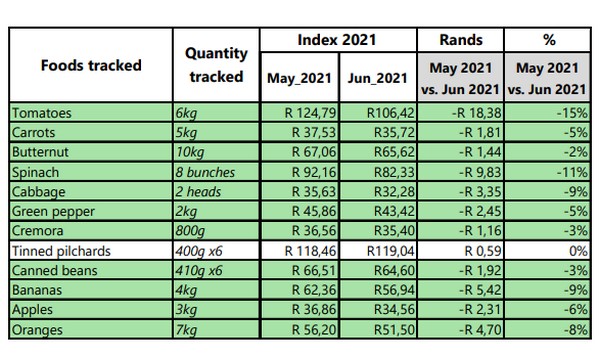 Regionally, food baskets in all areas except the Johannesburg came down very marginally in June, bringing no real relief to struggling households, the PMBEJD said.